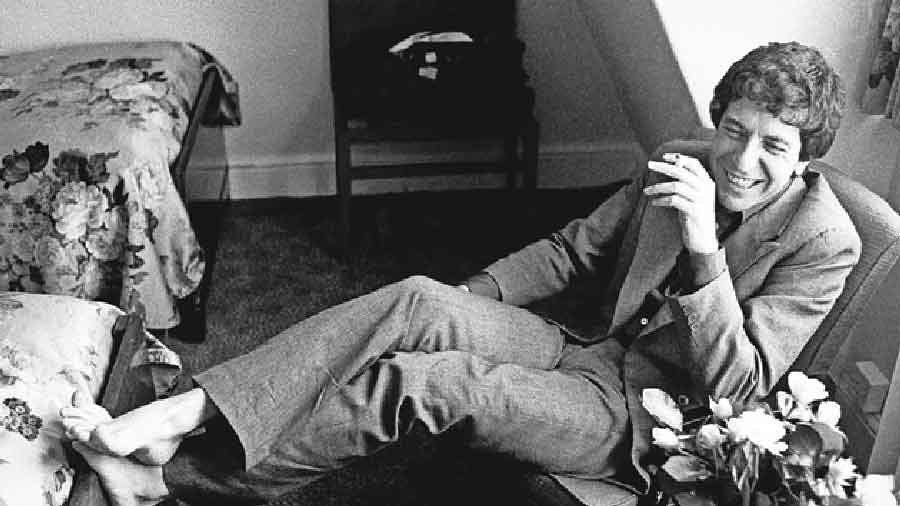 There were certain ironic and amusing sidebars, because the record that it came from which was called Various Positions. First, [it’s a] record Columbia wouldn’t put out. They didn’t think it was good enough. It had songs like Dancing to the End of Love, Hallelujah, If It Be Your Will. So there was a mild sense of revenge that arose in my heart. But I was just reading a review of a movie called Watchmen that uses it, and the reviewer said ‘Can we please have a moratorium on Hallelujah in movies and television shows?’ And I kind of feel the same way. I think it’s a good song, but I think too many people sing it — Leonard Cohen in 2009
A.O. Scott   |   Published 07.07.22, 12:18 AM

Leonard Cohen’s final album, released in October 2016, is called You Want It Darker. He died on November 7, the day before the US presidential election, and in the years since, things have grown very dark indeed.Cohen wasn’t one to offer comfort.

His gift as a songwriter and performer was rather to provide commentary and companionship amid the gloom, offering a wry, openhearted perspective on the puzzles of the human condition. Hallelujah: Leonard Cohen, a Journey, a Song is, accordingly, not a movie designed to make you feel better about anything, except perhaps Cohen himself.

But this generous documentary is nonetheless likely to be a source of illumination for both die-hard and casual fans, and even to people who love Cohen’s most famous song without being aware that he wrote it.

That’s Hallelujah, of course, which you can hear at weddings and funerals, on singing-competition reality television shows and in too many movies to count. The directors, Daniel Geller and Dayna Goldfine, wrap a circumspect biography of the singer — loaded with archival footage and interviews with sundry friends and admirers, including a rabbi and a Canadian government official — around the story of the song.

It’s quite a story. Hallelujah took something like seven years to finish — Cohen’s own estimates varied. Larry Sloman, a music journalist who knew Cohen well and interviewed him often, surmises that there may be as many as 180 verses, starting with the one everybody knows. By now, we’ve all heard about the secret chord that David played, and it pleased the Lord.But Hallelujah did not please the executives at Columbia Records, who refused to release Various Positions, an album recorded in 1983 that also included the future classic Dance Me to the End of Love.

John Lissauer, who produced the LP and who had worked on and off with Cohen since the early ’70s, recalls the label’s decision with dismay and surprisingly good humor, given the damage done to his professional prospects. (Various Positions was eventually released on a small American label.)

A lot of people have made the comparison between Bob Dylan and Leonard Cohen over the years and there are some hilarious stories. Like the two of them are sitting in a cafe in Paris and Dylan says to him, ‘How long did it take you to write Hallelujah?’ And my father completely lied to Dylan and said, ‘Oh you know, a couple of years.’ I think it was [actually] seven years. And then my father returned the favour and said, you know, ‘How long did it take you to write Like a Woman?’ and Dylan said ‘Fifteen minutes.’ And that’s very much about process I think. Dylan had this quality where he would [shoot] ‘from the hip’, you know spit and polish, spit and vinegar and then this old man of mine was much more like chiseling marble — Leonard Cohen’s son Adam Cohen in an interview

At the time, Cohen had been recording for nearly 20 years, though he was also something of a musical late bloomer. He was past 30 when he turned to songwriting, having established himself as a poet and figure on the Canadian literary scene.

The filmmakers sketch his early life and career, noting his privileged upbringing in the Westmount section of Montreal, his interest in Jewish and Zen Buddhist religious teachings and his reputation as a Casanova. (His fifth studio album is called Death of a Ladies’ Man.)

I heard the one on (Leonard Cohen’s album) Various Positions first, but then I was stuck in a room with that I’m Your Fan CD [a Cohen tribute album] and I listened to [John Cale’s version], and it was, again, very simple. Then I heard that Cale version one time again in Tower Records, and I was just struck. There and then, I thought, ‘This is wonderful’ — Jeff Buckley

Personal matters stay mostly in the background. Suzanne Elrod, his partner in the mid-70s, is briefly mentioned — we’re reminded that she was not the inspiration for the song Suzanne — and their children are glimpsed but not named.

Dominique Issermann, the photographer with whom Cohen lived on the Greek island of Hydra, reminisces fondly about their time together. But Hallelujah is interested in Cohen’s private life mainly insofar as it suggests themes for his work.

These could be divided up — spiritual, sexual, existential, emotional — but he specialised in tracing the entanglement of those categories of experience. Sloman, citing an unidentified critic, says that Cohen was most interested in “holiness and horniness.

”Hallelujah is his great anthem of religious ecstasy and sexual longing. Some versions emphasise the sacred, while others dwell on what another poet called “the expense of spirit in a waste of shame”.

“All I’ve ever learned from love/Is how to shoot at someone who outdrew you”: Some singers omit that line (and the one about being tied to a kitchen chair), but even when transcendence seems to prevail over cynicism, the tension between sacred desire and profane disappointment remains.

The documentary’s account of the song’s fate, indebted to Alan Light’s book The Holy or the Broken, is a fascinating study in the mechanics and metaphysics of pop-culture memory. Bob Dylan, who admired Cohen, added Hallelujah to some of his set lists in the late ’80s.

Shrek the DreamWorks animated blockbuster about a lovelorn green ogre, repurposed Cale’s glum version. The soundtrack album, which sold millions of copies, included another one, more in the melodramatic Buckley mode, by Rufus Wainwright. The floodgates were open.

“It goes like this: the fourth, the fifth.” By the hundredth time, you might think the magic would be gone, but Hallelujah is one of those rare songs that survives its banalisation with at least some of its sublimity intact. Cohen lived to see its triumph, and the last third of the documentary is devoted to his comeback, including generous clips from his later concerts. He is, throughout, a vivid, complicated presence — witty, melancholy, well-dressed and soft-spoken.

By the end, he radiates wisdom, gratitude, and the kind of fulfillment whose elusiveness had always been his great subject.