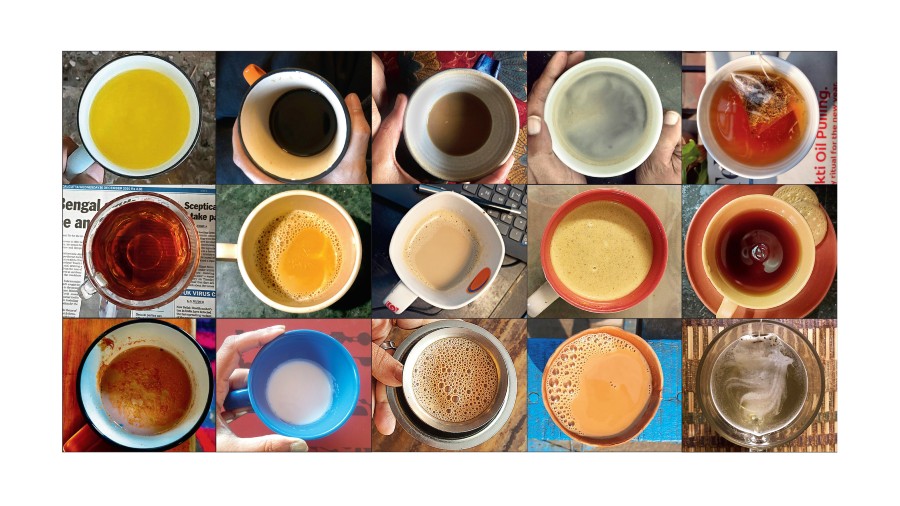 Perhaps the greatest Indian manoeuvre against China is the cha manoeuvre. Tea, after all, is a Chinese herb and tea drinking was a Chinese practice. Englishman Samuel Pepys writes in his famous diary in 1661, “I sent for a cup of tea (a Chinese drink), of which I had never drank before.” The Indian offering came much later. In The Indian Tea Gazette of 1881, one Samuel Baildon writes how in 1839 samples of the first tea manufactured in Assam were sent to the East India Company in London, which in turn forwarded a portion to the Society of Arts. The society submitted a report that read thus: “Indian tea possessed all the richness, strength and flavour of the very finest kind imported from China...” The British did their bit to popularise and anglicise Indian tea — and not for charity — but the Camellia sinensis discovered its versatile genius once it brewed amidst India’s splendoured variety. That happened sometime into the 20th century.

In the first decade or two of the 1900s, tea drinking was restricted to the British and a small percentage of Indians. It was the stagnant export markets that forced the British to sell tea within India. In the 1921 book, The Tea Industry, J.C. Kydd writes that during the war, because of the shortage of ships, it became difficult to ship tea consignments. It was decided then that a certain volume would be sold within India in small one-pice packets. At the back of each packet, printed in four languages, were the following instructions: “Empty the contents of this packet into an earthenware teapot and pour on enough well boiling water for six cups of tea. Add milk and sugar to taste.” This was in 1918.

The Tea Cess Committee employed 700 gramophones, 8,000 vernacular records, 200 harmoniums, and many table games to popularise tea rooms. Signages and posters at train stations and shops carried detailed instructions in vernacular on how to prepare the beverage. And that is how the drink itself came to be injected into the life-stream of Indians.

The Tea Cess Committee had tried to market tea like a health drink. But depending on geography and the corresponding climate and culture, there were additions and subtractions to the decoction. Nayantara Palchoudhuri, who is vice-chairperson of the Indian Tea Association and a fourth-generation planter from Darjeeling, talks about the varieties of tea found in India. “Black tea, white tea, green tea and golden tip tea of the orthodox variety are some of the broad categories that form the base for most of the tea variants,” she says. And then there are oddities and oddities. Tea garden labourers drink a beverage made out of the tea flower. They add to it a pinch of salt. Says Palchoudhuri, “Sugar is a luxury for them, even now.” 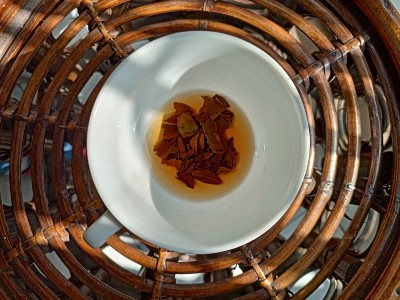 In neighbouring Assam, the staple is Ronga Saah or the decoction. Depending on taste, some add sugar to it or a squeeze of lemon or pink salt. In roadside stalls, the same preparation comes with an add-on — julienned ginger floating on top. People of the Northeast drink Chaga or mushroom tea, a hot, clear mushroom soup with tea leaves. In Bengal’s Murshidabad district, there is a tradition of Posto Cha or poppy tea, a legacy of the nawabs. Poppy paste is the topping. In and around the imambaras there, this drink flows generously, still. The Moa Cha or tea with khoya kheer (Bengali for mawa) and chopped almonds is also popular in these parts. While in Moa Cha the kheer is boiled with the tea leaves and milk, in the Chai Malai Maar Ke that powers Punjab, the malai or cream comes on top.

Bengal is particularly famous for its tea addiction, and much of the variety of preparation has to do with socio-economics. Local train regulars will tell you about the milky Bhadralok Cha, obviously a function of affordability, and the classes will joke about the Lal Cha served in and around Communist precincts. In his childhood memoirs Jakhan Chhoto Chhilam, Satyajit Ray writes about his uncle who would jot down in his diary his own classification of the different preparations of tea he consumed at different places. In parenthesis he put down the rationale behind his nomenclature. Nrisinghabhogyo Cha (strong tea), Baishnabbhogyo Cha (weak, sweet tea), Keranibhogyo Cha (inexpensive tea), Majlisi (self-explanatory) Cha, Bhattacharjobhogyo Cha (just-right tea), Paharadarbhogyo Cha (tea that will wake you up)...

In Himachal Pradesh and Uttarakhand, they drink Buransh Ki Chai, a blend of Assam tea and dried rhododendron petals. In Ladakh and Sikkim, tea was prepared traditionally with yak milk and salt. Doma Wang, who runs a Tibetan restaurant in Calcutta, talks about Gur Gur Cha or butter tea. She says, “This is the best way to beat the biting cold. It is more a need of the climate than that of the taste.”

The Gavati Chaha that Maharashtrians drink is tea leaves boiled with lemongrass, ginger, water and milk. In the paper “Making tea in India: Chai, capitalism, culture”, Philip Lutgendorf writes about the Irani cafes that came up in Bombay at the end of World War I. He writes, “They (Iranis) brought a taste for tea from Iran, but their preferred drink — strong black tea sipped with a lump of rock-sugar in the mouth — was soon modified to suit Indians’ dairy cravings...”

The other kind of tea that is associated with Mumbai and Maharashtra is Cutting Chai — a term that possibly connoted a small portion to begin with. And in the Malabar region, according to food historian Shree Bala, they drink Katan Chai or Sulaimaani tea. She explains, “It is tea boiled with mint leaves and served with sugar, but no milk.”

Up in Kashmir, they would drink Cha Tulch, or bitter tea, boiled in a copper pot and brewed with phuli, or red potash, Chinese aniseed and a little salt. And then there was “churned tea”, which was Cha Tulch churned with milk. Anita Tikkoo, a Kashmiri food blogger, talks about Shir Chai or Noon Chai made with gunpowder tea (green tea leaves rolled into small balls), milk and baking soda.

Says Tikkoo, “The colour of this tea is a pretty strawberry-milkshake pink. It has in it green cardamom, cinnamon and ground walnuts. It is served at the end of the meal with a dollop of clotted cream.”

Like Shir Chai, the Kashmiri Kahva is also not strained. Says Tikkoo, “To make Kahva, one has to add crushed cinnamon and a cardamom pod to the water, throw in sugar and bring the whole thing to a boil. Gently rub the tea leaves between the palms of the hands and add to the boiling liquid. After a couple of minutes, turn off the heat and let it steep for another minute. Crush almonds in a cup and pour the brew. If it is a special day add strands of saffron to it.”

While it is well accepted that all of south India swears by filter coffee or kaapi, like tea, this too is far from indigenous. In his book In Those Days There Was No Coffee, social historian A.R. Venkatachalapathy writes that only in the early 20th century did the European beverage enter south Indian homes. In a 1917 edition of the Tanjore Gazetteer, an F.R. Hemingway says that of late not only the higher classes but also “Shudras, even of the poorer classes” seemed to prefer coffee in the morning instead of the traditional kanji or cold rice.

The now generic name of filter kaapi derives from the accepted method of preparation — ground beans brewed in a stainless-steel coffee filter. The writer R.K. Narayan has written about coffee making being “a task of precision at every stage” right from the “decoction drawn at the right density” to the addition of “fresh warm milk” to the addition of sugar, “just enough to mitigate the bitterness but without producing sweetness”.

Venkatachalapathy has spoken of coffee school debates over cow milk versus buffalo milk in coffee. Purists would not hear of the latter and they wouldn’t/won’t tolerate chicory in coffee either. Pulled coffee, stretched coffee and metre coffee — wherein the beverage is poured from one tumbler into another from a height to produce the frothiness — and common in roadside stalls and eateries differ from the traditional filter kaapi not so much in taste as in performance.

One must not forget the Chaffee, which is either milky bhaanr (kulhar) tea with a sprinkling of coffee powder or the powder at the bottom, blossoming into a frothy something upon contact with the hot tea poured onto it.

Starch: Where milk is neither accessible nor affordable, there is the substitute. Tribals are known to drink warm starch with a little turmeric. Others boil drumstick leaves with salt. Or even leaves of eucalyptus boiled in water, strained and had with a pinch of salt.

Chhang or Chi: Made in Sikkim by fermenting ragi or finger millet. It is dried, stored and served in bamboo tumblers by adding hot water to it.

Ambil: This is made by boiling ragi and mixing with curd. It is had with a pinch of salt or boiled in milk with dry fruits and jaggery. It is drunk in Maharashtra and Karnataka.

Khejur Ras: In many interior places of Bengal, people drink hot date palm juice in the morning. Says writer-activist Kalyani Thakur Charal, “It is a sweet, pale yellow liquid that is served much before it turns into poira gur or palmyra jaggery.”

The maths of espresso coffee

Taste a cuppa of tea tales