Taste a cuppa of tea tales

A beverage made from the first harvest of a garden is light and delicate. A few months later, the second harvest from the same garden lends a rich musky character to the drink. The two are like youth and wisdom. 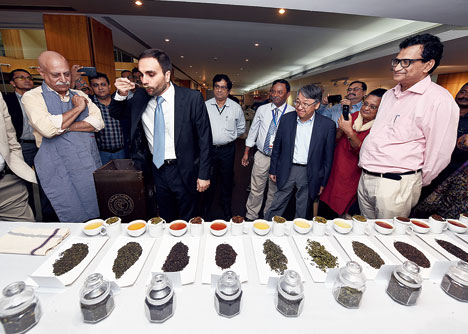 A beverage made from the first harvest of a garden is light and delicate. A few months later, the second harvest from the same garden lends a rich musky character to the drink. The two are like youth and wisdom.

Calcutta: Tea tales brewed at a tasting session for the champagne of Darjeeling on Friday.

Foreign envoys were shown how to make the "right slurp" - and forget manners for a moment - to realise all the flavours, each independent of the other, at the same time.

India's favourite drink has a centuries-old heritage. The tea industry creates maximum sustainable livelihood in Darjeeling and is steeped in the local history of the hills.

"Since the time the British first planted tea saplings in the Darjeeling area way back in the early 1800s, tea has become synonymous with the art, culture, lifestyle and economic ecosystem of the people around the tea gardens," said Samrat Chowdhury, the chief mentor of BAUL (Bespoken Architectural and Unique Legacies of Bengal), which hosted the Chiabari Festival at ICCR, with the external affairs ministry and Chamong Chiabari Tea Resorts.

There are more than 80 tea gardens in the hills of north Bengal. The Darjeeling tea industry employs 55,000-odd workers and some five lakh people are dependent on the industry.

Arijit Raha, the secretary general of the Indian Tea Association, gave an overview of the Indian tea industry. The stagnation in auction price over the past few years and climate change were some of the challenges before the industry, he said. "There is an urgent need to check unfettered expansion as well."

Krishan Katyal, the chairman and managing director of auctioneer J Thomas, said the beauty of Darjeeling tea was in the distinct difference in flavours of the drink made from the leaves of the same garden in two different seasons.

"During the first flush in spring, the leaves are fresh and green like new shoots. The liquor is a beautiful, clear, light and delicate. The leaves of the same garden during the second flush in summer are of a completely different texture - thicker, heavier and more succulent. The tea is richer, with a ruby red colour and a depth and mellowness," said Katyal. "It is hard to choose one. The two flavours are like youth and wisdom."

The consuls general of France and Japan were among those at the event along with Kajari Biswas, the head of the Indian external affairs ministry's branch secretariat in the city.

During a tea tasting session, Ajay Kichlu, the director of the Chamong Group, invited Damien Syed, the French consul general, to the table.

When Syed kept sipping the tea, Kichlu and Katyal asked him to slurp in a spoonful and let it roll in his tongue. The reason - a sip allows just one composite taste, while a slurp allows a jet of the liquor to enter the mouth, activating all the taste buds simultaneously. "The composite taste is dissected into specific compartments and each one of them is felt independently," Kichlu said. Syed got it right the next time.

The programme included discussions on the prospect of tea tourism and the way forward for attracting foreign visitors. "We are trying to make India a 365-days-a-year destination. Niche offerings like tea tourism would play a key role in that," said J.P. Shaw, the regional director of India Tourism in Calcutta.

P.K. Bhattacharya, the secretary general of the Tea Association of India, said 11 new tea estate proposals are pending with the government. "A couple would be approved soon."