Markets in cities such as Lahore, Hyderabad and Lucknow had entire streets devoted to food, full of small restaurants and famous cooks who specialized in a single dish 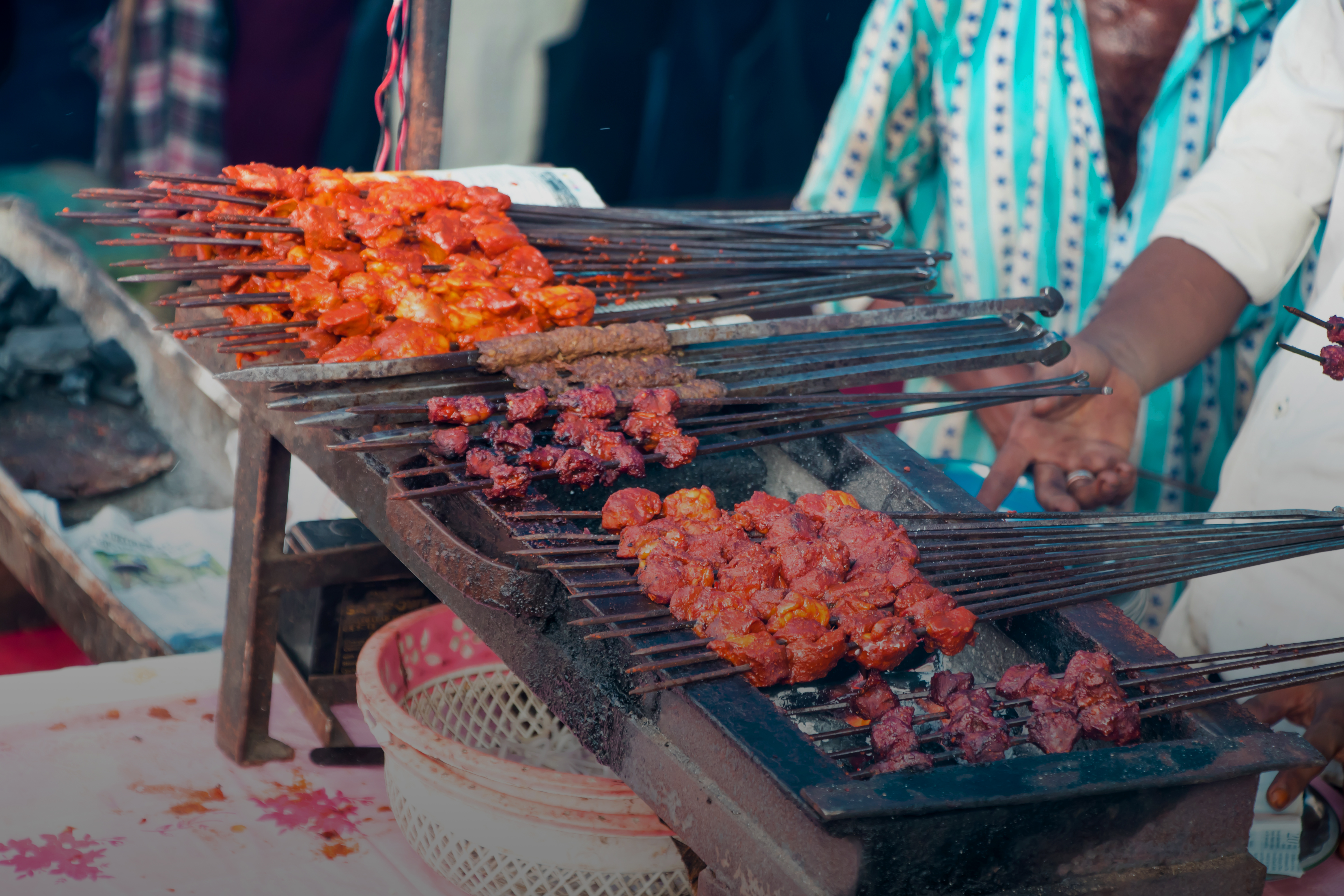 This emergence of the cafe culture is ironically seen as a modern phenomenon today, with co-working spaces within cafes and bars. The modern-day cafes as co-working or socializing spaces are as representative of a popular youth culture in Indian cities as the qahwakhanas were of old Delhi.

Shah Jahan’s Delhi also had its khomchawallas (who sold snacky treats from cane baskets and moved from locality to locality), halwai shops (selling sweets, breakfast goodies and snacks), kebabchis (kebab makers) and naanbhais (bread makers), who cooked and sold the choicest of delicacies to the city folk. In the years to come, halwais such as Ghantewala would become iconic, even mentioned in various accounts of the Sepoy Mutiny of 1857 by citizens of Delhi, some of whom saw the sepoys as uncouth hordes who had descended on their urbane city and had become softened by its riches. As William Dalrymple writes in The Last Mughal, some of these accounts blame soldiers for being softened by the luxuries of Delhi and the sweets from Ghantewala, refusing to fight in the name of the emperor and in fact running away, leaving Delhi to be decimated by the retaliating English forces.

Meanwhile, khomchawallas, another set of peculiarly Shahjahanabad retailers, can be seen as mini ‘moveable restaurants’ akin to food trucks – they carried bamboo baskets from locality to locality to sell to their patrons dainty moong pakoris, chaat and daulat ki chaat made from milk froth every winter. This form of food retail continued to exist well after Partition, when families staying in old Delhi enclaves still patronized khomchawallas, the original chaat vendors of India.

Naanbhais, kebabchis and nihari shops were other retailers in Mughal India, not just in Delhi but also in other large cities that patronized food cultures under the Mughal influence, even as the power of the Mughal emperor himself was on the decline. In Lucknow, where Mughlai culinary sophistication was to reach its zenith, an old nihari shop, Rahim in Chowk, exhibited this ditty on a board, extolling the superiority of Lucknow’s food over Delhi’s: ‘Janab Hazrat e Ghalib jab yahan aaye / pakar ke baith gaye woh Rahim ke paaye’ (loosely translated as: ‘When Ghalib left Delhi to come to Lucknow, he sat down holding on to Rahim’s dish of trotters’).

Markets in cities such as Lahore, Hyderabad and Lucknow had entire streets devoted to food, full of small restaurants and famous cooks who specialized in a single dish. We see remnants of this kind of food retail even today. However, it is important to note that back then this was primarily the preserve of men, who ate and patronized street food.

Tunday Kababi, the popular kebab shop in Lucknow, is an example of this kind of retail. Though now gentrified and touristy, the shop was set up in the red-light area of old Lucknow by Haji Murad Ali (1877–1967), a migrant from Bhopal. Ali was called tunda because he had only one arm. The original shop still exists in Chowk in the old city, though other outlets have opened. Early accounts of the shop by its patrons talk about how men would buy the kebabs made with beef, a cheaper meat than mutton that the more moneyed classes (both Muslims and Hindus who ate meat, like the Kayasths) ate, wrapped up in donas (leaf cups), and walk up the dingy staircases to visit the prostitutes.

What were some of India’s earliest restaurants? A popular tale of Mughal romance gives us some answers. According to lore, when Jahangir met the future Noor Jehan (Mehr-un-Nissa) at a meena bazaar, a makeshift market in Mughal times to sell items or donate money for charity, she had her mouth stuffed with batashas, dainty meringue-like confections made from expensive refined sugar. Mehr-un-Nissa was a lady-in waiting to the dowager empress Salima Sultan, Akbar’s first wife, and had bought the batashas from a stall in the bazaar. These kinds of ‘pop-up’ bazaars, as we would call them today, were places where ladies from the Mughal harem set up stalls of crafts, clothing and food as entertainment for royalty. And these were typically held during popular festivals such as Nowruz, the Persian New Year, which, according to various historical accounts, were celebrated by the Mughals with great fanfare.

If these were royal bazaars meant only for the aristocracy, by the time Shah Jahan shifted his capital to Delhi, trade (including restaurant trade) was bustling in a very urbane way. In account after account on Mughal Delhi, including by travellers such as Niccolao Manucci from Venice and François Bernier from France, and later-day accounts by Indian poets and historians, we get a sense of Shahjahanabad as a highly evolved, cultured capital, where poets, artists, spiritualists and the finest of cooks congregated, right till the time of Bahadur Shah Zafar II.

Bernier in his Travels in the Mogul Empire describes a huge variety of foods, both uncooked and cooked, sold in the bazaars of Shahjahanabad. A culture of connoisseurship was developing and would continue till the very end of the Mughal empire. Stephen Blake notes in Shahjahanabad: The Sovereign City in Mughal India 1639–1739 that coffee houses, or qahwakhanas, were places where poets would congregate, debate and read their works, earning praise from those gathered. This can be seen as an important milestone in food retail in India. This was perhaps the first time in metropolitan India that a cafe culture emerged – where a cup of coffee could be looked at as something promoting social and cultural interaction.

Why restaurant food was not considered appropriate for genteel middle-class Indians might have had to do with the ritualistic way in which food has always been cooked in India. Food was treated as medicine, prepared carefully according to flavour combinations based in Ayurveda – the science of food and medicine, which recommended a balance of various gunas ascribed to each ingredient – and strict caste injunctions and rituals governed its preparations and eating in most uppercaste Hindu kitchens…

Dining was a private affair for both Hindus and Muslims, who ate with their own kind mostly – and we can see traces of this sort of segregation even now. What this meant was that even in cities where food was elevated to an art form, the best fare was still what was cooked by highly paid chefs for an elite audience within homes.

If professional chefs run restaurants today, history has come a full circle. In medieval India, the moneyed nobility employed the highest-paid chefs and not the bazaar chefs who cooked the common man’s chaat, kebabs and breads. Several accounts of Lucknow, including the early 20th-century Guzishta Lucknow by Abdul Halim Sharar, talk of highly paid rikabdars, or professional cooks, who specialized in unique dishes that left their diners amazed.

Shaikh Fida Ali was a rikabdar during the reign of Wajid Ali Shah, the last nawab of Awadh. He once placed a transparent lampshade on a table before a British dignitary. He placed a lit candle inside the lampshade, then blew it out, broke what appeared to be the glass of the shade and started eating it. ‘It was later learnt that the entire lampshade was made out of sugar candy,’ wrote Aslam Mahmud, an old Lucknauwallah and bureaucrat, in his superbly researched Awadh Symphony, which talks about life under the nawabs. Centuries before molecular gastronomy began to beguile us with its presentations, the rikabdars were already practising food as an art form…

After the British assumed power in India and Mughal might was lost, cooks who had till then laboured in the kitchens of aristocrats found themselves out of work. Some of them found work with new employers but discovered that these new sahibs and brown sahibs of the Raj did not understand the elite art. Chef Mujeeb-ur-Rehman, a wellknown chef from Lucknow popular for his high-end wedding catering, tells me this delicious story behind the popular Lucknow idiom, ‘Yeh moonh aur masoor ki dal’, used to be dismissive about someone.

According to him, a chef who found employment after having served a nawab for a long time asked his new employer what he would like to eat that day. The employer told him to make something simple like masoor dal. The chef in turn handed the employer a long list of ingredients to be bought for the preparation, looking at which the employer’s face fell and he complained of the expense. The cook walked out, scoffing, ‘Yeh moonh aur masoor ki dal’ (loosely translated as ‘How can you, with this face, appreciate my masoor dal’).

Used to a lavish, no-expense-spared way of cooking, the talented cooks must have been at a loose end. Some of them and their descendants set up small restaurants where they refashioned the elaborate and exquisite foods of their former masters as bites for common men. Qormas (hitherto cooked only within homes, nihari being the street dish), dal and pulaos were thus tweaked to become part of Mughlai menus at a few restaurants in cities such as Delhi, Calcutta, Lahore and Lucknow.

From Business on a Platter: What makes restaurants sizzle or fizzle out by Anoothi Vishal. Excerpted with permission from Hachette India

Tunday Kababi, the popular kebab shop in Lucknow was set up in the red-light area of old Lucknow by Haji Murad Ali (1877–1967), a migrant from Bhopal. Ali was called tunda because he had only one arm
Matt Stabile/ Flickr

An adda on anarchy with William Dalrymple

The curious case of the Calcutta chop