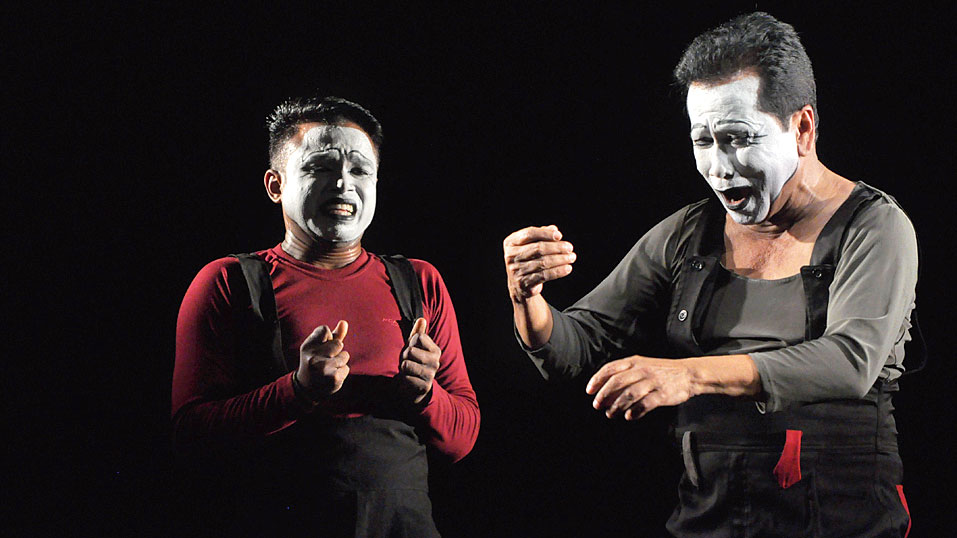 Mime, synonymous with Jogesh Dutta in this part of the world, seems to have consolidated its association with proscenium theatre. The 42nd Mime Festival (December 8-10), hosted by Jogesh Mime Academy at its Kalighat auditorium, coincided with the golden jubilee celebrations of Padaboli, the first mime training institute of independent India. Innovative programming, in addition to some outstanding guest performances, clearly showcased the versatility of mime in contemporary Indian theatre.

The innovation started with the inauguration itself. Sobhandeb Chattopadhyay, the state minister who presided over the ceremony, must have been elated to see his life as a boxer and then as a politician encapsulated in a skit executed in mime. The young trainees of Padaboli, who stole the show in the opening session, also demonstrated their ability to keep pace with the changing times, in terms of both themes culled from everyday reality and their treatment. Arindam Barman, who played multiple roles in his performance in The Third Umpire, was a cut above the rest.

The biggest draw of the festival was a special tribute to Jogesh Dutta by some of his best students. As Dutta, months short of turning a nonagenarian, sat in the front row, appreciating each act, the tribute turned into a retrospective of pieces that made Dutta a household name, not only in West Bengal but also all over India and abroad. Padaboli veterans like Shantimoy Roy and Tapan Chakraborty displayed an innate sense of humour and compassion in playing legendary pieces like Phuchkawala (The Phuchka Seller) — much to the delight of the audience. Srikanta Bose showed fine form in playing Chor (Thief) and Smriti (Memory) — both marked by Dutta’s empathy towards the socially and culturally marginalized in a cosmopolitan ambience. Bose’s brilliant take on Janma theke Mrityu (Birth to Death) — a moving journey through the seven ages of man from being a foetus to his last breath in all but six minutes — reminded one of what Dutta had achieved when he struck a chord globally.

A well-researched documentary made on Dutta by Ashoke Chattopadhyay was premiered on the second evening. The same evening also saw an hour-long guest performance by Guwahati-based Moinul Haque. Assisted by young Bijit Kumar Das on the stage, Haque demonstrated remarkable precision in creating original pieces like The Barber (picture, right), and then finished off with Boxing Champion Moinul — his masterpiece. The finale was marked by Haque’s excellent support system, with Sailen Kakati on the lights and Ratan Das handling the pre-recorded track and live music simultaneously, adding volumes to the electrifying atmosphere.

How the younger generation of Dutta’s students is expanding the periphery of mime came to fore on the final evening that began with a charming group presentation by Imon Mime Centre from Maslandapur, led by Dhiraj Howlader. It was followed by a memorable act by Debkumar Pal and Suvendu Mukhopadhyay. Mukhopadhyay’s solo piece, Illusion, marked a departure in terms of its treatment of the absurd in mime. The duo next presented The Dentist and Man Machine (picture, left). While the former utilized loads of slapstick situations that Chekhov explored in his tales, the latter worked upon the Chaplinesque tricks but expanded them further. Suman Mukherjee’s Miss Enabela was slightly sexist in execution, but was reminiscent of Dutta’s initiation into the art by playing a lady before her dressing mirror.

The festival ended with Gautam Halder’s solo act, Amake Dekhun. Although a regular proscenium drama, it owes a lot to the tradition that Dutta implanted in our cultural practice in the last six-and-a-half decades.