Advertisement
Home / Culture / Arts / A look into the past, present and ‘how tomorrow might be'

A look into the past, present and ‘how tomorrow might be'

The second edition of the Behala Art Fest, with The Telegraph 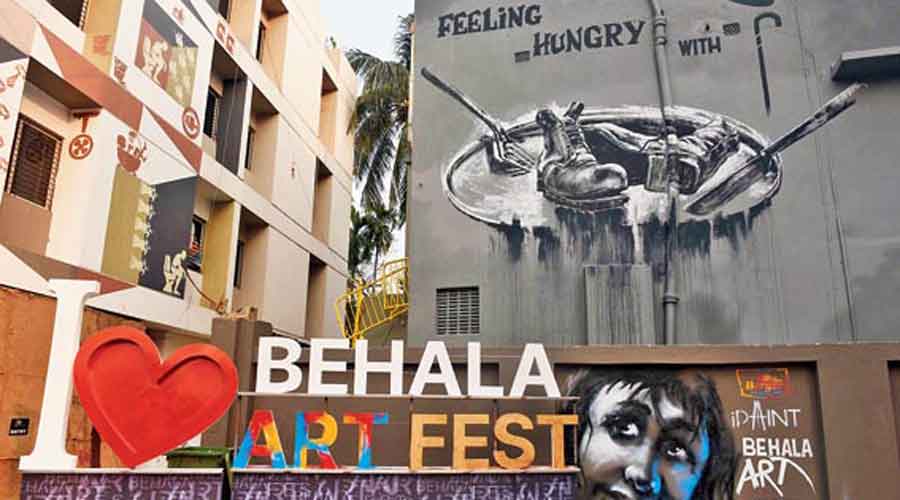 India, 2019 onwards, has been going through turbulent times. The abrogation of the special status of Kashmir in 2019, the passing of controversial legislative bills and police brutality and the consequent widespread protests against them, the pandemic, and the farmers’ protests till date have evoked deep questions from artists about the fundamental rights of citizens, including the very nature of freedom as it stands today. Deriving from the self-reflexive, conceptual framework of minimalist art in Asian countries like China, Japan, and Russia, the second edition of the Behala Art Fest by Nutan Sangha in association with The Telegraph was held recently at the 14 number Bus Stand, Behala, displaying impactful installations and graffiti on the theme ‘How Tomorrow Might Be’, reflecting on the crises and incongruities of the contemporary times with a forward-looking glance at the probable future.

“Behala Art Fest is about subaltern culture and subaltern art, so we were looking for an open-air space for the exhibition to be accessed by everyone and not just select groups. We work as a team; the drive for the fest was spurred majorly by Oindrilla and me. Conceptually, we did not want this to be like the usual art fest. While Behala Art Fest is about the Behala area and its people, with their histories, it also explores the concept of time and what is happening around through the wheels of time. Art is one medium that holds the mirror to some truths that need to be told or reminded, be it the pain of the Bengal Partition or the ongoing farmers’ protests, or the stories of the residents of Behala itself, or the pain and suffering of the migrant workers during the lockdown. With the secondedition of the Behala art fest, we have amalgamated visual art with socio-political theories and cultural theory, putting together graffiti and installations around the overall theme ‘How Tomorrow Might Be’,” said Sanatan Dinda, convener, Behala Art Fest.

Straight out from the world-famous scene of Charlie Chaplin’s The Gold Rush, this graffiti by Sanatan Dinda portrayed the universal theme of hunger that rings closer to home than ever before today against the backdrop of the farmers’ protests in the country. “The landmark scene has been taken and drawn in context and amalgamation with the farmers’ protests. Farmers provide us food, so if they halt the crop production, given the current crisis, then what will we eat? The palpable crisis of hunger shown 50 years ago in the film is still very relevant today-what are we leaving for our next generation? With the rising price of grains, rising petrol prices, the crisis is real and here and now,” said Sanatan.

Another side of the walls depicted poignant scenes, by Sanatan Dinda, of the plight of the migrant workers as they were forced to leave for their homes during the lockdown. In ‘Lie Lie Land’, the heartbreaking photographs of the migrant worker crisis that went popular on social media, such as that showing a mother hauling her son on a suitcase, along with other such scenes were drawn on the wall. “When the lockdown happened, along with common people and have-nots, the haves were locked down too. If NRC is implemented, everyone will be deported to detention camps. So we will raise the thorny questions around these burning issues to the government, just like artists, writers, and intelligentsia have been doing all along in Bengal, India, and the world at large,” said Dinda.

Along the path leading from the entrance to the art fest, luminous green silk-screens bearing the impressions of human faces hung from the top in a semi-canopy under the sky. “It’s a positive idea, the silk-screens, like the stamps, are celebrating the lives and identities of common people. Rather, we are all being enlightened by the light of the screens, which symbolises their value in the human society and economy on the whole,” said Sanatan Dinda.

A popular sight at the exhibition was a collage of stamps on the walls, painted by Sanatan Dinda. The stamps were all about and ‘for, of, by people’, depicting the lived histories of the common people. “The stamps show faces of the rickshawallahs, chaiwallahs, the people of this place, kids who have held on to this place as their own. These stamps celebrate and tell the story of common people that are often unheard, untold, and unsung. Perhaps these people will lead ordinary lives and never go abroad, unlike the stamps that travel abroad via a letter. But by putting the impressions of their faces on stamps, we tried to fill that gap artistically and conceptually, and commemorate them and their lived experiences,” said Dinda.

‘Self-construction’, an installation with found objects by Bimal Samanta traced the making, unmaking, and remaking of an artist by everyday objects in their life. Assorted from his early childhood such as steel utensils, a defunct photocopier, analogue technology, exhausted cartridges, a broken-down TV etc, the miscellaneous objects marked his manifold experiences with digital technology. The personal associations with these day-to-day objects raise them above their immediate use as media that construct the artist’s self-identity, memorialising him/her in a way beyond death.

Etched in the broad strokes of activism-meets-art, the installation ‘Un-strain’ by Sanatan Dinda portrayed the history of the farmers’ movement in India against the backdrop of the ongoing farmers’ protests, signifying the cracks and conflict between the nation and its citizens. The powerful visual imagery was further fuelled by chants of ‘Azadi’ from the audio track collected from videos of the protests shared on social media. “These are people who are not and cannot be defined by religion. These seven ploughs are symbols of the seven farmers who committed suicide during the Telangana Gono Andolan. Those ploughs have ploughed on in furrows across time, and have reached Delhi — the nation’s capital and the site of the ongoing protests. I feel one with the troubles and pain that the farmers are going through today in India. I have ploughed the soil here to bring out the concept visually. The mouthpiece reflects their will to resist and raise their voice against the government’s wrongs and their will to be heard unmediated, while also criticising the hollow speeches of the politicians,” explained Dinda.

Drawing from Eric Hazan’s A History of the Barricade, Krishanu Pal’s installation, ‘The Broken Barrier’ symbolised the history of the barricade and its waning control in the wake of a sweeping surge of protests and resistance around the world. The guard rails, especially in terms of the restrictive connotations of their purpose and use in civil society, are being gradually subverted by the rising collective force of protests, thus shown lying discarded in an overlooked corner of a residential area, going up in the sky into another transcendental plane.

‘The Nuances of Memory — tell me what you retain’ by Upasona Chatterjee integrated performance with visual art, exploring memory through the multiplicities of visions, images, and visuals that bombard it and tap into the subconscious, forming a visual parallax that changes one’s deep-seated convictions and values. While memory flashes through everything that we perceive visually, what passes by it and what do we retain eventually — that is the metaphysical question.

Photographer Asish Saha’s installation, ‘Depersonalisation’ displayed technology as the medium that enables and enfeebles human subjectivity. Put together by a still image projection on the wall, a camera, lights, found film strips and found sound, the imaginative installation depicted how human identity and human psyche draw from, interact with, and are shaped by technology, such as a camera that captures and memorialises personal experiences, while also being paradoxically depersonalised by technological advancement.