Stock markets kick off Samvat 2078 on a cheerful note 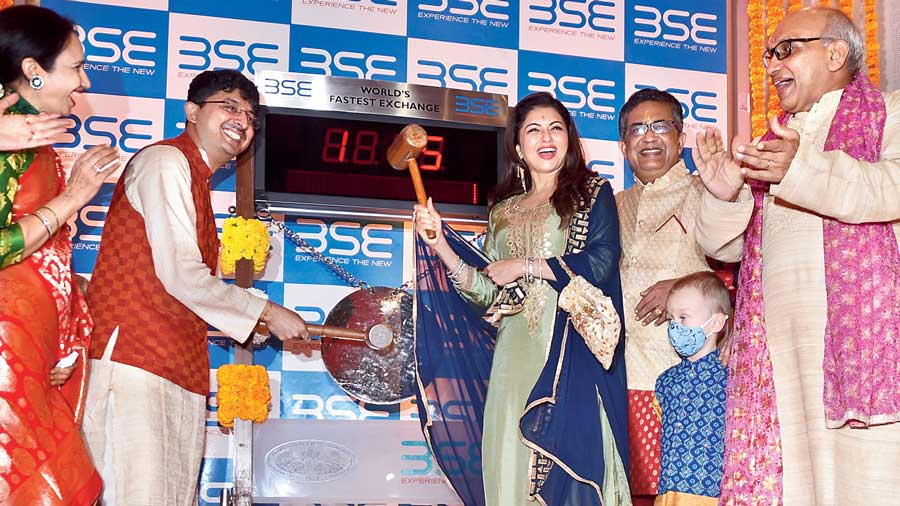 Stock markets kicked off Samvat 2078 on a cheerful note buoyed by the fuel duty cuts and the US Fed shying away from any decision to cut its policy rates in the future.

Market players said investor participation was better than last year with the cash market turnover on the NSE at over Rs 11,553 crore.

Investors are being extremely guarded in voicing their outlook for equities in the year ahead, especially after the sharp run-up in the just ended Samvat 2077.

But on the auspicious opening day of Samvat 2078 they remained bullish and took their cues from the duty cuts announced by the Centre and some states.

The investors now expect inflationary pressures to ease, while sectors such as automobiles will benefit from the cuts.

Among the sectoral indices on the BSE, the S&P auto index led the list of gainers rising 1.43 per cent.

In the Sensex pack, Mahindra & Mahindra rose 3.13 per cent to Rs 872.95 followed by ITC, Bajaj Auto, Larsen & Toubro and Kotak Mahindra Bank which gained up to 1.82 per cent.

The rally came on the back of encouraging global cues.

The markets had already discounted the taper decision announced by the Fed on Wednesday night. The US central bank said it would begin to reduce its monthly bond purchases of $120 billion by $15 billion per month and end them by 2022.

Investors were seeking guidance on US inflation and interest rates. US Fed chair Jerome Powell said the time has not yet been reached to raise interest rates which came as a big relief .

Analysts are advising caution on buying strategies. Stocks are likely to be volatile this year as they face challenges such as  the withdrawal of accommodative monetary policy, rising inflation and interest rates on one hand and tailwinds such as strong economic growth in India.

Given the concerns of expensive valuations, it is felt the markets will be harsh towards any earnings disappointment from corporate India. Brokerages expect certain sectors such as banking, real estate, tourism & hospitality and metals to do well.

They said retail investors should look at quality stocks having good earnings visibility. “After the spectacular returns in Samvat 2077, investors should expect modest returns only, say in low teens, in Samvat 2078. This Samvat is likely to be very volatile, unlike last Samvat,” V.K. Vijayakumar, chief investment strategist at Geojit Financial Services said.

“Rising inflation would be the biggest known threat to the market. Rate hikes by the Fed can happen by the end of 2022 or, perhaps, earlier than that if persistent inflation and the bond market forces its hands,’’ Vijayakumar said.

He said any rate hike by the US Federal Reserve  would lead to some capital flight from emerging markets such as India and this was likely to trigger some sharp correction in the market. However, such a correction may turn out to be low and short-lived if the economy rebounds smartly.

All eyes on RBI

Back home, the Reserve Bank of India (RBI) is expected to announce some major steps in its policy normalisation. Some analysts expect the central bank to raise the reverse repo rate in its December policy meet or in the next calendar year.

According to Krishna Kumar Karwa, managing director — Emkay Global Financial Services, while the Nifty has delivered a 50 per cent return over the past one year and the small & mid-cap indices have gained by 80 per cent, it will be “unfair” to assume that the benchmark indices will deliver similar returns in the short term.

“A carefully constructed portfolio which harnesses the tailwinds, which the Indian economy is expected to enjoy in the coming years, should deliver 12-15 per cent compounded returns over the medium term,”  he said.

“Right from IT, domestic manufacturing and real estate to financial services, capital market intermediaries, and capital goods --- all the sectors are expected to do well over the medium term’’, he added.

According to Dhiraj Relli, MD & CEO, HDFC Securities,  “After a great year for equity markets, investors are looking forward to the markets continue to rise though not at the same pace.”

“Global headwinds in the form of rising inflation and withdrawal of monetary stimulus may impact the momentum, but strength in Indian macros and improving micros may help offset these.”