Indian hospitality brand Sarovar Hotels, which manages around 80 hotels, is expanding its footprint in East Africa, with plans to add to its existing properties in Ethiopia, Kenya, Tanzania and Zambia. 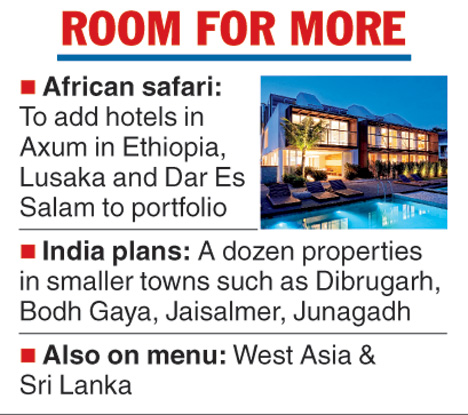 New Delhi: Indian hospitality brand Sarovar Hotels, which manages around 80 hotels, is expanding its footprint in East Africa, with plans to add to its existing properties in Ethiopia, Kenya, Tanzania and Zambia.

"We plan to add hotels in Axum in Ethiopia, Lusaka in Zambia and Dar Es Salam in Tanzania over the next few months," said Ajay K. Bakaya, managing director of Sarovar Hotels.

The latest to be taken over by Sarovar is luxury property Yeha Hotels in Axum, the fabled city of Queen of Sheba with a 2000 year-old history with ancient churches and Obelisks.

Bakaya said the company found opening hotels in smaller cities in India and East Africa to be profitable. "India is still undersupplied as far as hotel rooms are concerned. And there is value in East Africa... we have found it comfortable to expand there."

Around 15 hotels will be started between September 2018 and November 2019, including a dozen in smaller cities such as Dibrugarh, Bodh Gaya, Jaisalmer and Junagadh. Sarovar operates hotels in three-, four- and five-star categories. Besides hotels, it operates Geoffrey's, the popular English Pub brand.

"Other than India and East Africa, we will in the future focus on West Asia, which we feel is a natural extension to our East African ventures as there is good connectivity and business links between the two regions and with india," said Bakaya. The other country Sarovar is interested in is Sri Lanka.

"LHG wants us to grow the Sarovar brand... they have been supportive of our expansion plans not only in India but in Africa too," Bakaya added.

Sarovar also plans to set up a regional sales office at Nairobi for better marketing in East Africa. "We will keep looking at potential properties in East Africa... we feel the culture, language and similar legal systems help," Bakaya said.