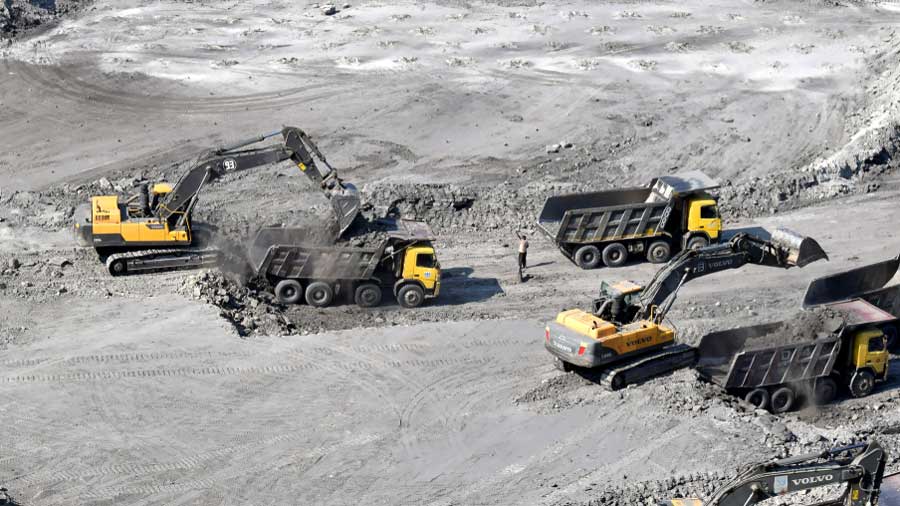 Importers of coking coal, steam coal and bituminous coal would have to gain a permit ahead of deliveries, the commerce and industry ministry said.
File picture
Our Special Correspondent   |   New Delhi   |   Published 25.12.20, 01:04 AM

The government plans to launch the coal import monitoring system from February, making it mandatory for importers to disclose future shipments.

Importers of coking coal, steam coal and bituminous coal would have to gain a permit ahead of deliveries, the commerce and industry ministry said.

The move is expected to encourage domestic coal production and make the recently auctioned commercial coal mining viable in the country.

“The coal import monitoring system (CIMS) shall require importers to submit advance information in an online system for import of items and obtain an automatic registration number,” it said.

The government has a similar system for steel imports. The proposed monitoring system will allow the government to keep an updated record of import volumes, with details of specific grades. The coal import data is at present compiled with a lag of two to three months.

The information on imports could also help the government to fine-tune its policies to discourage coal imports.

The data may enable state-controlled coal producers, including Coal India (CIL), to reach out to the importer, in case the requirement can be matched from domestic sources.

The government may impose an anti-dumping duty for five years on certain type of steel products from a few countries, including Japan and Korea, to guard domestic players from cheap imports as the commerce ministry has recommended for the same.

According to a notification by the ministry’s investigation arm DGTR, the duty “is recommended to be imposed for five years” on imports of “flat-rolled products of stainless steel” from regions, including the European Union, Japan, Korea, Malaysia, and Taiwan.

According to a notification of the directorate general of foreign trade (DGFT), import policy of these items “shall be subject to CIMS”.

The CIMS shall require importers to submit advance information in an online system for imports of items and obtain an automatic registration number by paying a registration fee of Re 1 per thousand, subject to a minimum of Rs 500 and maximum of Rs 1 lakh, on the CIF (cost, insurance, freight) value.

“The importer can apply for registration not earlier than 60 days and not later than the 15th day before the expected date of arrival of import consignment,” it said. The registration number would be valid for 75 days.

“The importer shall have to enter the registration number and expiry date of registration in the bill of entry to enable customs for clearance of consignment,” it added.

CIMS will be effective from February 1, 2021 and the facility of online registration will be available from December 31 this year.

The country's coal consumption was likely to rise in coming years, but it could vary widely, with 2030 demand seen anywhere between 1.15 billion tonnes and 1.75 billion tonnes.