But one day the BJP will form the government here on its own: Sushil 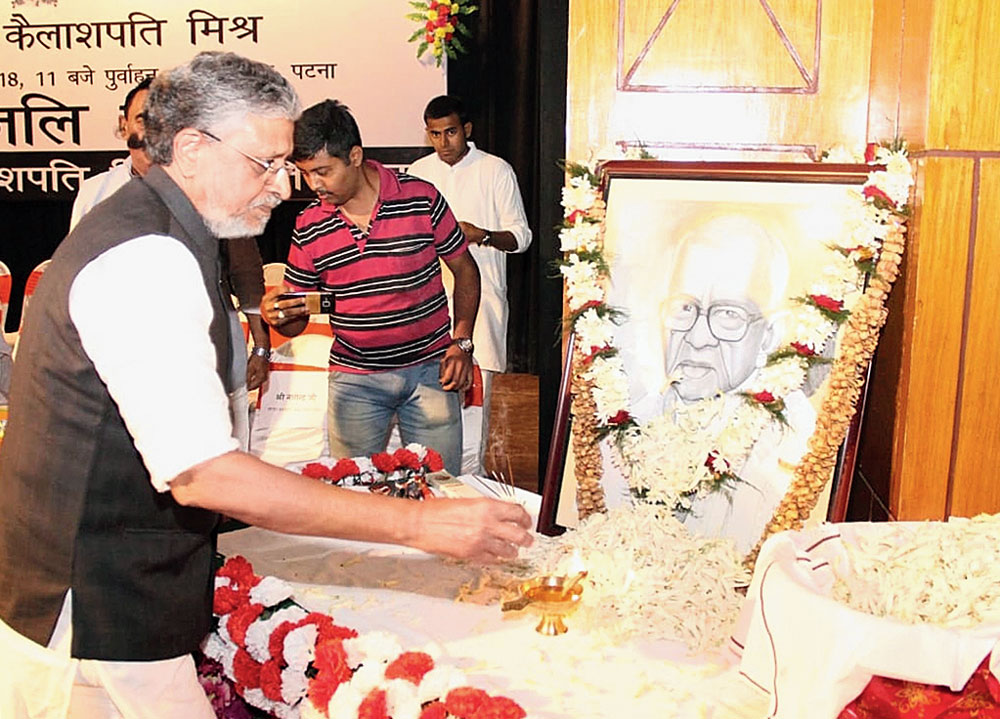 Deputy chief minister Sushil Kumar Modi on Saturday hinted at the BJP’s ambition to form a government on its own in Bihar, recalling the dream of late leader Kailashpati Mishra.

“We are in an alliance today. In future we will abide by alliance dharma. But one day the BJP will form the government here on its own,” he said at Rabindra Bhavan during Kailashpati’s sixth death anniversary ceremony. Radha Mohan Singh, Ashwini Choubey, Ram Kripal Yadav, Nityanand Rai, Bhupender Yadav, Nand Kishore Yadav and other leaders were present.

Kailashpati was called Bhismapitamah of the Bihar BJP for building the party from scratch and converting it into a major political force in the state. Modi recalled Kailashpati was opposed to alliances.

“When the BJP formed the alliance with the Samata Party in 1995, Kailashpatiji was so angry that he went and lived in Assam for a period. He, however, returned and later accepted the leadership’s decision,” said Modi. “It was his dream to form a BJP government in Bihar. All of us should take a pledge to fulfil his dream one day.”

Modi is considered one of the most ardent supporters of chief minister Nitish Kumar but his statement finds echoes in a section of BJP leaders who argue that the party should have gone alone in Bihar for the coming elections.

“In the 2015 Assembly polls we had almost 25 per cent of the votes despite contesting only two-third of the seats. On an average we had 60,000 voters per Assembly constituency in 2015. We should have let public resentment against Nitish and Lalu build up and fight the (2019 Lok Sabha) polls alone,” said a former Union minister.

They, however, seem resigned to the fact that the BJP will remain with Nitish at least till the 2020 Assembly polls.