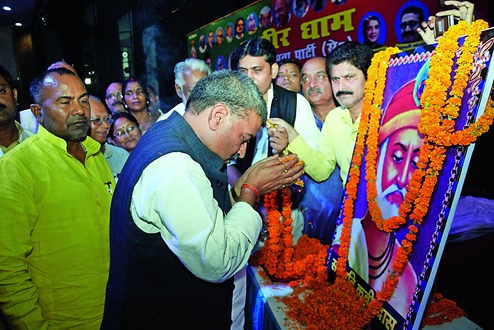 Former MLC Ajay Singh 'Almast' has been elected national president of the RSPS, while Om Prakash Singh will be president of its Bihar unit.

Formation of the new party was announced at Sri Krishna Memorial Hall in Patna where members of the RLSP and several other small socialist parties from Bihar, Uttar Pradesh, Haryana and other places had gathered to celebrate Kabir Jayanti.

The RLSP was founded by Union minister of state for human resources Upendra Kushwaha in 2009. It won three seats in Bihar in the 2014 Lok Sabha elections.

Though there was a vertical split between followers of Kushwaha and those owing allegiance to the party's Jehanabad MP Arun Kumar, the move comes at a time when general elections are around nine months away.

RLSP sources said both factions were battling before the Election Commission (EC) to get recognised as the main party. Arun is seen as the brain behind the new party.

"We have formed a secular party - RSPS - to agitate on issues related to equality, common people, crime, health, education in the state and the failure of the central government's policies vis-à-vis public welfare," RLSP national secretary Madheshwar Singh, from the Arun faction, said. "We have accepted Arun as our leader. He will guide us. All constituents and members of RSPS have accepted this."

Arun said he attended the function as an invitee. "We'll support RSPS and share the stage with it. We all are like-minded parties and believe in socialist ideology, which is in danger at present. We will chalk out a formula to decide how we will work together," Arun said.

The Jehanabad MP added said the new party and its associates may turn out to form a big front to work for the people. RLSP founder leaders Vinod Kushwaha, Vijay Kushwaha and Ram Pukar Sinha, and Amar Singh Chauhan of the Rashtriya Janwadi Party in Uttar Pradesh were present on the occasion.