Chief minister Nitish Kumar on Saturday flagged off "seed vehicles" to different districts while launching the Kharif Maha-abhiyan to spread awareness and better seeds among the state's farmers. 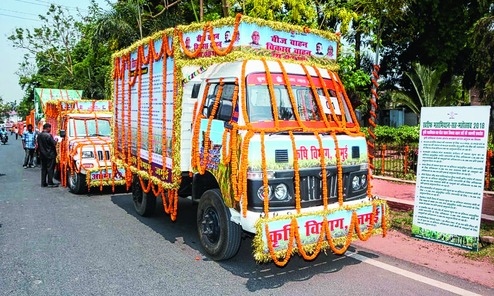 Patna: Chief minister Nitish Kumar on Saturday flagged off "seed vehicles" to different districts while launching the Kharif Maha-abhiyan to spread awareness and better seeds among the state's farmers.

Two "raths" (chariots or modified vehicles) will go to every district. One of the vehicles will inform farmers at the village level to village panchayat, block and district levels about the schemes run by the government during the kharif season. The second - or seed development vehicle - will provide better seeds of kharif crops to the farmers. These will also carry facilities for treatment of seeds and insecticides needed.

Prem said the two vehicles will visit villages to spread awareness about the latest agricultural techniques among farmers and to ensure they participate in block-level training and implement distribution camps across the state from May 23-31.

"The entire programme is aimed at ensuring production and productivity of paddy through timely sowing, irrigation, water management, cultivation with the help of SRI (system of rice intensification) technique, use of zero tillage and seed drill, direct sowing of paddy, and use of paddy transplanters. Horticulture crops will also be encouraged," said Prem.

He added that the recommended seeds will be made available to the farmers, and they will also be trained in scientific cultivation of crops sowed in the kharif season.

Agriculture minister Prem said this year's paddy cultivation will be cultivated on 34 lakh hectares and the production target is to have 153 lakh tonnes of paddy or 102 lakh tonnes of rice.