No festive break for political parties in Bihar 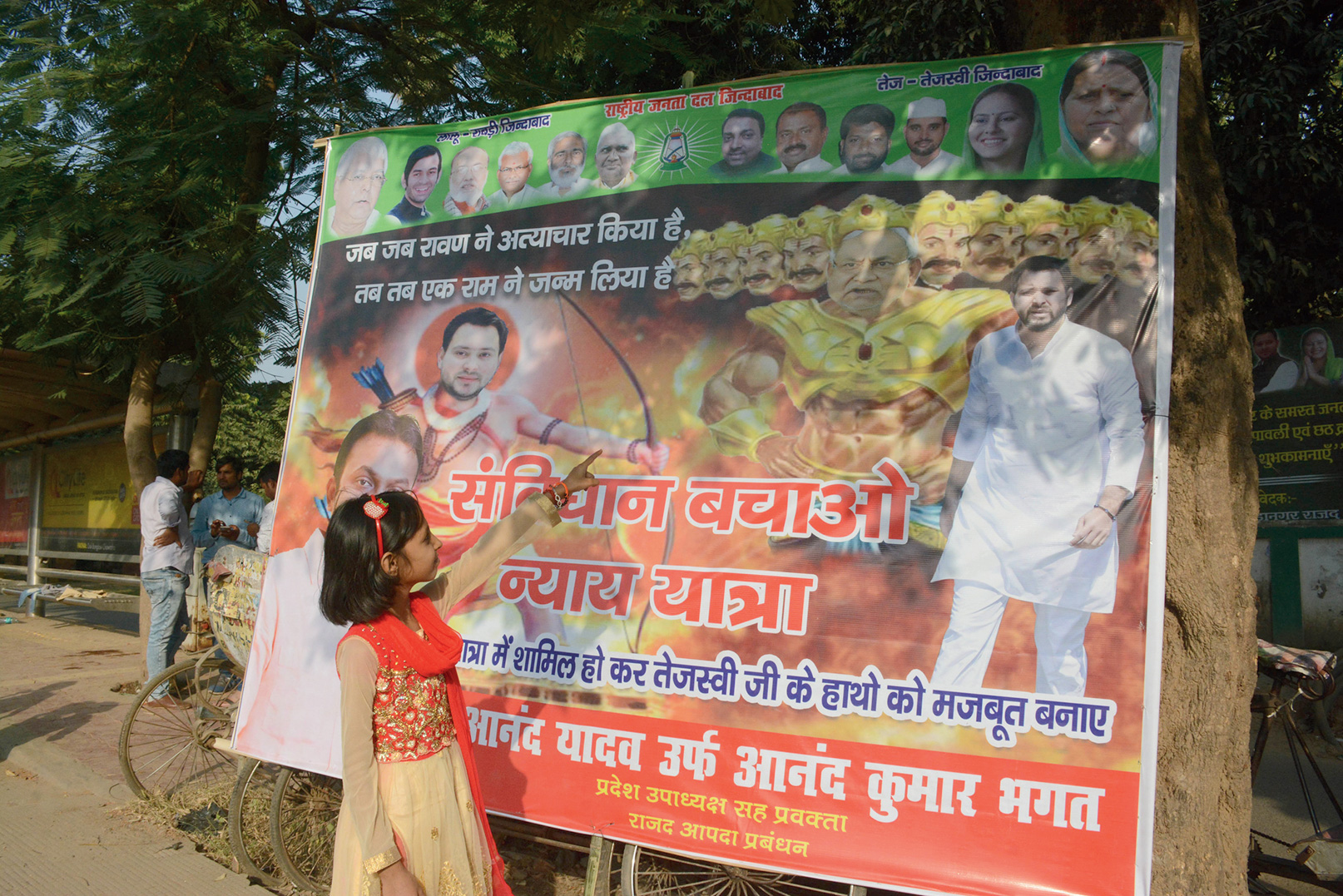 The nine nights of Navratra and the five days of Durga Puja are a time for friends, family, and bonhomie — unless, of course, you are a neta in Bihar.

Be it the RJD poster depicting party leader Tejashwi Prasad Yadav as Lord Ram and chief minister Nitish Kumar as the demon king Ravan or deputy chief minister Sushil Kumar Modi firing on all cylinders at the Opposition, this festive season saw no let up in politicking.

On Thursday, a day after an RJD office-bearer put up the poster depicting Nitish as Ravan and him as Ram, Tejashwi gave a half-hearted denouncement.

“I do not approve of such posters, but at the same time the chief minister should reflect why the people are so angry with him,” the leader of Opposition tweeted in Hindi.

Earlier, RJD MLA Shakti Singh Yadav had come out in defence of the poster. “It is actually Ravan raj (in the state). Rapes, murders, kidnappings and corruption are rampant. The poster reflects the truth,” he remarked.

The JDU, not to be outdone, took potshots at Tejashwi.

“Why are you in a hurry to be worshiped like Lord Ram that you got a poster put up depicting yourself as Lord Ram? Lord Ram was the ideal human. You, on the other hand, have only corruption to show. You cannot make anyone Ravan by slinging mud at them. Ravan, in today’s context, is a person who is submerged in corruption,” said JDU spokesperson Sanjay Singh.

As news came of poll strategist-turned-star JDU member Prashant Kishor being made the national vice-president of Nitish’s party, the RJD came out with a statement that Nitish was trying to clip the wings of his close confidant RCP Singh. Leaders of Lalu Prasad’s party added for good measure that Nitish had played a crucial role in the unseating of George Fernandes and Sharad Yadav from the post of party president.

The Congress was also not left behind in the contest to score political points during the festival season. The grand old party put up a poster declaring that it would award Rs 5 crore to the person who can name the 35 airports which Prime Minister Narendra Modi claims to have made during his tenure, and also to anyone who can reveal the details of the Rafale fighter aircraft deal. The Congress leaders, however, did express their disapproval over the RJD poster depicting Nitish as Ravan.

The BJP, meanwhile, gave it back as good as it got.

“Had it not been an election year there might have been some relief from politics, but everybody knows that they cannot afford to go slow,” remarked a BJP leader pointing towards dissident BJP leader Shatrughan Sinha and Tejashwi Yadav going Durga Puja pandal hopping together and Sinha blessing Tejashwi to be victorious.

The festive season politicking was not just limited to mudslinging. On Thursday, Union minister and RLSP chief Upendra Kushwaha met Bhupender Yadav, the BJP’s in-charge of Bihar, in Delhi leading to speculation overt the number of seats to be given to the party that

has been blowing hot and cold at the NDA.