Doing yoga apparently kept a British air hostess fit and allowed her to survive for 10 hours in the water without any other means of support after she "fell off" a cruise liner at midnight. 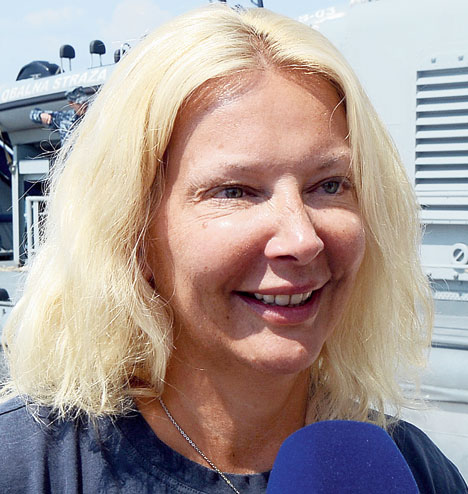 London: Doing yoga apparently kept a British air hostess fit and allowed her to survive for 10 hours in the water without any other means of support after she "fell off" a cruise liner at midnight.

One of her rescuers told a newspaper: "She said the fact that she practices yoga helped her as she was fit."

Mystery still surrounds precisely what happened to 46-year-old Kay Longstaff, who either fell or jumped from the seventh deck of the Norwegian Star, a 92,000-ton cruise liner, 60 miles off the coast of Croatia. CCTV showed she went into the water at midnight and she was rescued at 9.40am the following morning.

Yoga is now very popular in Britain, though not among Indians. Celebrities, especially actresses, have incorporated it into their daily routine.

Longstaff, who used to be a stewardess with Virgin Atlantic and now works on private jets, has unwittingly become the best walking ad for the power of yoga.

After being rescued, Longstaff, who lives in Spain, told Croatian news channel HRT: "I fell off the back of the Norwegian Star and I was in the water for 10 hours, so these wonderful guys rescued me. I am very lucky to be alive. I was sitting at the back of the deck."

Others sources suggested she had had too many drinks or and had jumped after a serious quarrel with her boyfriend, Craig Rayment, an electrician who had celebrated his 43rd birthday on board.

She had broken up with a previous partner, Luke Hopkins, after a seven-year relationship. There were also reports she suffered from periods of depression because of the death of her mother from cancer when she was 14.

"Because they knew the time, they were able to know the exact position of the ship," he said.

The Norwegian Star, which was on its way to Venice, turned back the moment the crew realised a passenger was missing but could not find Longstaff in the dark.

The Croatian Coast Guard said the ship and an aircraft launched a search at around 6.30am on Sunday. The ship's crew spotted her in the sea around 9.40am and one of them dived in the sea to haul her out and take her to hospital. She was found around a mile from where she fell and was on the point of giving up.

Lovro Oreskovic, captain of the Cavtat Coast Guard rescue ship, said: "We have saved a human life, and nothing else compares to it.

I am proud of the entire crew, and particularly of Ensign Marin Delic, a rescue swimmer who took the woman, exhausted from the long hours spent in the sea, to the deck."

There is now much discussion in Britain about how Longstaff survived for 10 hours.

According to Prof Mike Tipton, an expert in sea survival at the University of Portsmouth, "the two big factors with falling into water are the temperature and the sea state, and they compound each other.

"If you're in a rough, choppy sea, you have to work hard to keep your nose and mouth above the water and you become exhausted and drown. In this case it was quite calm, so you can relax in the water," Tipton said.