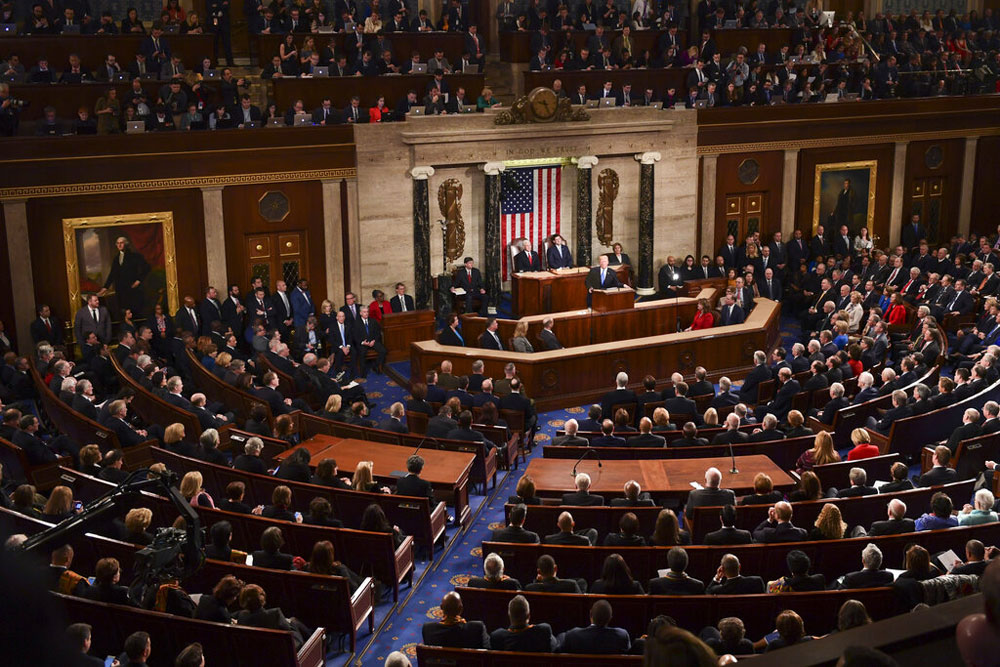 Nancy Pelosi behind and above. Female immigrants, gazing down from the balcony. A black woman who ran a close race for governor of Georgia, rebutting.

When President Donald Trump delivers his first State of the Union address under divided government on Tuesday, he'll be surrounded by these and other living reminders of the 2018 elections that delivered Democrats the House majority and a record number of women to Congress.

House Speaker Nancy Pelosi will sit just over his shoulder on the dais, on-camera, looking out at the assembled lawmakers, Cabinet members, Supreme Court justices and diplomats. Seated in front of Trump will be a record number of women House members, most Democrats and some dressed in easy-to-spot white. And in the gallery overhead? Two former employees of Trump's New Jersey golf club, women and immigrants, who have spoken out about its hiring practices.

'I hope she does a good job. I respect her,' Trump said Thursday of Abrams, who narrowly lost the race for Georgia governor to the president's ally, Brian Kemp. The president pledged to deliver a speech rooted in a theme of 'unity,' even as he renewed his demand for a border wall as a condition of keeping the government open past February 15. Before he spoke in the Oval Office on Thursday, Pelosi again rebuffed the demand and belittled him on national security matters.

Trump will give his speech on Tuesday before a joint session of Congress at a sensitive time in talks to prevent agencies from shuttering after the longest government shutdown in history. Members of Congress are inviting federal workers who went without pay for 35 days and are worried about a repeat.

But the striking visual is shaping up to be the new lawmakers who will be arrayed around the president and elected in the wake of Trump's inflammatory statements about women, immigrants, Muslims and more.

Two female immigrants will be among the lawmakers' guests and seated in the gallery above the House chamber. One is Victorina Morales, who worked for one of Trump's clubs in New Jersey for years even though she was born in Guatemala and lived in the US illegally. Morales, a guest of New Jersey Democratic Rep. Bonnie Watson Coleman, said in an interview that she feels respectful toward the president. But she does have a message for him after years of hearing Trump describe immigrants as a scourge that takes jobs from Americans.

'Forget about the wall, stop separating families and focus on immigration reform,' she said in an interview with The Associated Press, conducted in Spanish.

Another woman who cleaned the president's clothes and made his bed at his Bedminster club is attending the address, too.

Sandra Diaz, 46, a native of Costa Rica who worked at Trump's club from 2010 to 2013, will be attending as a guest of Democratic Rep. Jimmy Gomez of California, according to the lawyer for both women, Anibal Romero. Diaz told the AP last month that she was also hired without legal papers and supervisors at the club knew it. She is now a legal permanent US resident. Diaz said she decided to speak out because she is angry about the president describing immigrants as violent.

Abrams speaks both before and after Trump. The Georgia Democrat, heavily courted by Democrats to run for a Senate seat in 2020, lost her bid to be the nation's first African-American woman governor after a protracted fight.

On Sunday, the 45-year-old Democrat will take her push for voting rights to the airwaves in her home state during the Super Bowl. Abrams' political group, Fair Fight, has bought airtime on Georgia affiliates broadcasting the game so the Atlanta Democrat can push for election law changes.

Abrams said she'll speak about inclusion 'at a moment when our nation needs to hear from leaders who can unite for a common purpose.'