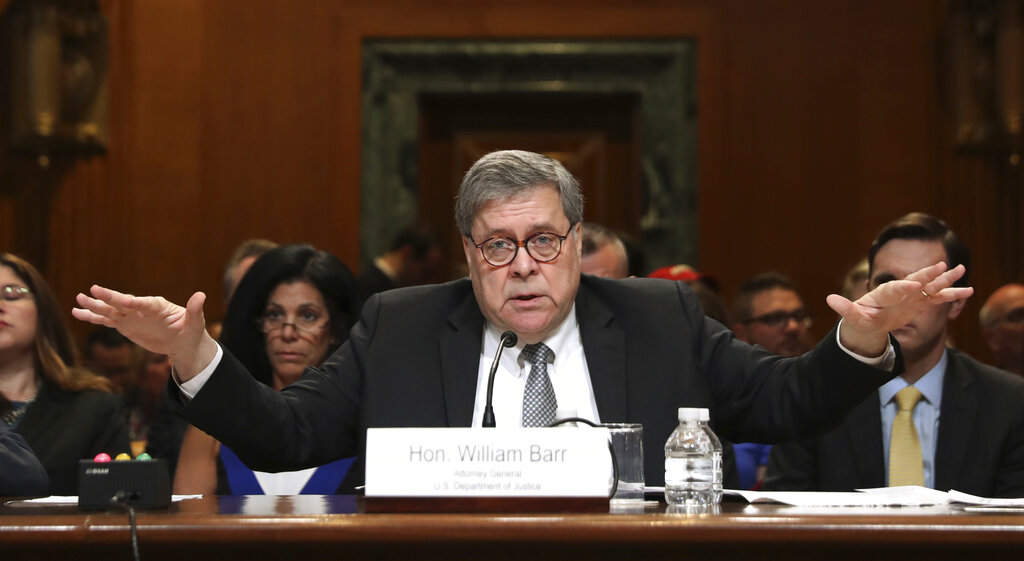 His comments before a Senate panel on Wednesday suggest the origins of the Russia investigation may have been mishandled. Barr's remarks aligned him with the President at a time when his independence is under scrutiny.

Barr did not say what 'spying' may have taken place but seemed to be alluding to a surveillance warrant the FBI obtained on a Trump aide. He later said he wasn't sure there had been improper surveillance but wanted to make sure proper procedures were followed.

Still, his remarks give a boost to Trump and his supporters who insist his 2016 campaign was unfairly targeted by the FBI.

Barr was testifying for a second day at congressional budget hearings that were dominated by questions about special counsel Robert Mueller's Trump-Russia investigation. The attorney general said he expects to release a redacted version of Mueller's report on Russian interference in the campaign next week.

Democrats have expressed concern that his version will conceal wrongdoing by the President and are frustrated by the four-page summary letter he released last month that they say paints Mueller's findings in an overly favorable way for the President.

In an interview with The Associated Press , House Speaker Nancy Pelosi said she didn't trust Barr and suggested his statements undermined his credibility as America's chief law enforcement officer.

Nancy Pelosi had earlier insisted that William Barr send to Congress the full report by special counsel Robert Mueller on the Russia probe with all its underlying evidence.
AP

At the Capitol hearing, senators appeared taken aback by his use of the word 'spying'. Asked by Democratic Sen. Brian Schatz if he wanted to rephrase his language, Barr said, 'I'm not sure of all the connotations of that word that you're referring to, but you know, unauthorised surveillance.'

Barr is an experienced public figure who chooses his words carefully, and it's not clear if he realized what a political storm he'd create in using the word 'spying.' While it could be used to describe lawful and necessary intelligence collection activities, for Trump and his supporters in this case it has an inherently negative meaning.

White House spokesman Hogan Gidley said on Fox Business News: 'People were wiretapped. People were looked into and spied upon. That should be a serious question that the American people should demand answers for and quite frankly so should Congress.'

Trump has repeatedly said the investigation of his campaign is an illegal 'witch hunt'.

On Wednesday he said: 'It was started illegally. Everything about it was crooked. Every single thing about it. There were dirty cops.'

Though Barr said at his January confirmation hearing that he didn't believe Mueller would be involved in a witch hunt, he struck a different tone Wednesday and said it 'depends on where you're sitting'.

'If you are somebody who's being falsely accused of something, you would tend to view the investigation as a witch hunt,' he said.


If you are somebody who's being falsely accused of something, you would tend to view the investigation as a witch hunt.
- William Barr


The spying discussion started when Barr was asked by Sen. Jeanne Shaheen, a Democrat, about his plans to review his department's actions in investigating Trump. A separate investigation is being conducted by the department's inspector general. Barr explained that he considered spying on a political campaign to be a 'big deal,' invoking the surveillance of civil rights protesters and then of anti-war protesters during the Vietnam War.

Barr later said that although he did not have specific evidence of wrongdoing, 'I do have questions about it'.

'I feel I have an obligation to make sure that government power was not abused,' he said.

Asked again about spying at the end of the hearing, Barr tempered his tone. 'I am not saying improper surveillance occurred. I am saying I am concerned about it, and I am looking into it,' he said.


I am not saying improper surveillance occurred. I am saying I am concerned about it, and I am looking into it.
- William Barr


Barr may have been referring to a secret surveillance warrant that the FBI obtained in the Fall of 2016 to monitor the communications of former Trump campaign aide Carter Page, who has not been charged with any wrongdoing. That warrant application included a reference to research by an ex-British spy that was funded by Democrats to examine Trump's ties to Russia.

Critics of the Russia investigation say the warrant was unjustified and have also seized on anti-Trump text messages sent and received by one of the lead agents involved in investigating whether the Trump campaign was colluding with Russia.

Barr's statement on Wednesday that he expected to release a redacted version of Mueller's nearly 400-page report next week marked a slight change from the estimate he gave Tuesday, when he said the release would be within a week.

Though he said the document will be redacted to withhold negative information about peripheral figures in the investigation, he said that would not apply to Trump, an officeholder and someone central to the probe.

Meanwhile, Trump falsely claimed again on Wednesday that the Mueller report had found 'no obstruction', While Barr's letter said the special counsel did not find a criminal conspiracy between Russia and Trump associates during the 2016 election, it also said Mueller had presented evidence on both sides of the obstruction question and ultimately did not reach a conclusion on it.

Barr said he did not believe Mueller's evidence was sufficient to prove that Trump had obstructed justice.

Democrats not giving up on Russia probe

Where the investigations related to Donald Trump stand