Trump lashed out at Acosta, saying, 'Honestly, I think you should let me run the country — you run CNN' 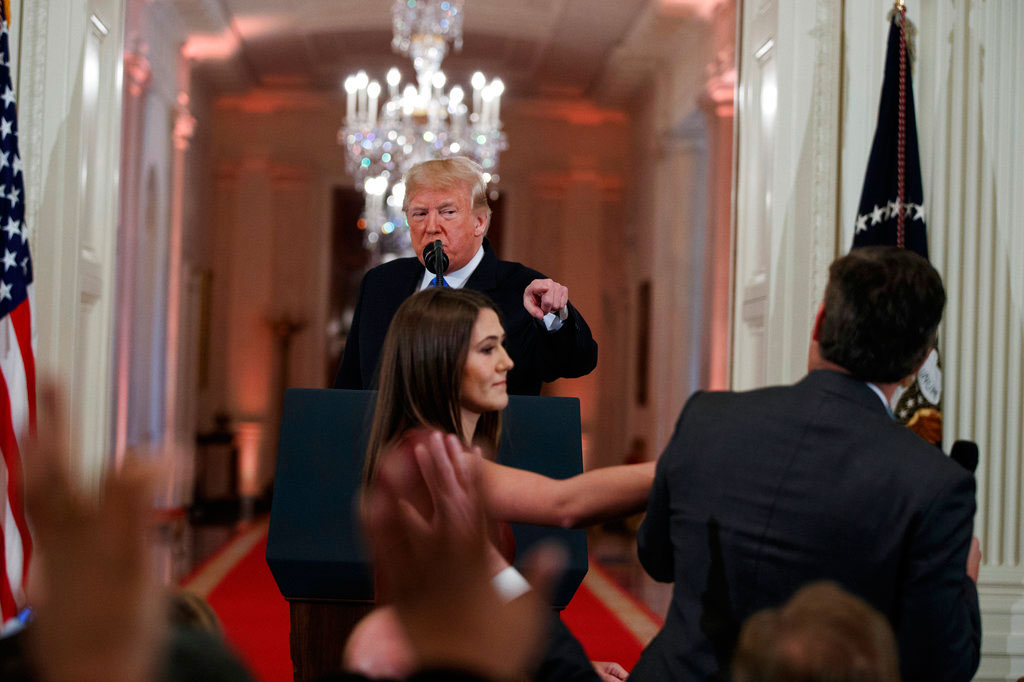 President Trump took the exceedingly rare step of suspending the White House credentials of Jim Acosta, the chief White House correspondent for CNN, on Wednesday after an intense verbal clash at a news conference earlier in the day.

During a testy session with reporters after Tuesday’s midterm elections, Trump recognised Acosta for a question. Their exchange grew heated when Acosta repeatedly challenged the President’s characterisation of a Central American migrant caravan as an invasion.

Trump responded by lashing out at Acosta, saying, “Honestly, I think you should let me run the country — you run CNN.”

Acosta, who was in the front row just a few feet away from the President, refused several times to sit down or to return a microphone to a White House intern who sought to retrieve it. When he finally did give up the microphone, Trump said that Acosta was “a rude, terrible person”.

“You shouldn’t be working for CNN,” the President said.

When Acosta tried to re-enter the White House on Wednesday evening for a live shot for his network, a Secret Service officer asked him to hand over his “hard pass”, which grants journalists access to the compound. Acosta captured the episode in a grainy video on his cellphone and posted it to Twitter.

Sarah Huckabee Sanders, the White House press secretary, who has also repeatedly clashed with Acosta during televised briefings at the White House, announced the decision, claiming falsely that Acosta had placed “his hands on a young woman” who was responsible for giving the microphone to reporters asking questions.

“The fact that CNN is proud of the way their employee behaved is not only disgusting, it is an example of their outrageous disregard for everyone, including young women, who work in this administration,” Sanders said.

The confrontation with the President came during a fractious encounter with reporters, only the third formal solo news conference held by Trump at the White House.

In addition to clashing with Acosta, he scolded several other reporters he deemed offensive, including Peter Alexander of NBC, April D. Ryan of American Urban Radio Networks and Yamiche Alcindor of PBS.

Trump repeatedly told Ryan to sit down, and he complained that a query by Alcindor was a “racist question”.

Coming the day after Trump’s party suffered significant losses in Tuesday’s midterm elections, the action sent a signal to other journalists that the President was willing to do what has almost never been done by his predecessors in modern times: blacklist a mainstream journalist from coverage at the White House.

Late on Wednesday, CNN denounced the decision. “It was done in retaliation for his challenging questions at today’s press conference,” the network said in a statement. “In an explanation, Press Secretary Sarah Sanders lied. She provided fraudulent accusations and cited an incident that never happened. This unprecedented decision is a threat to our democracy, and the country deserves better.”

A review of the video from the news conference did not suggest that Acosta put his hands on the woman, and a reporter who was present said that the White House account was not true.

“I was seated next to @Acosta at today’s press conference and did not witness him ‘placing his hands’ on the young intern, as the White House alleges,” Jeff Mason, a White House correspondent for Reuters, wrote on Twitter. “He held on to the microphone as she reached for it.”