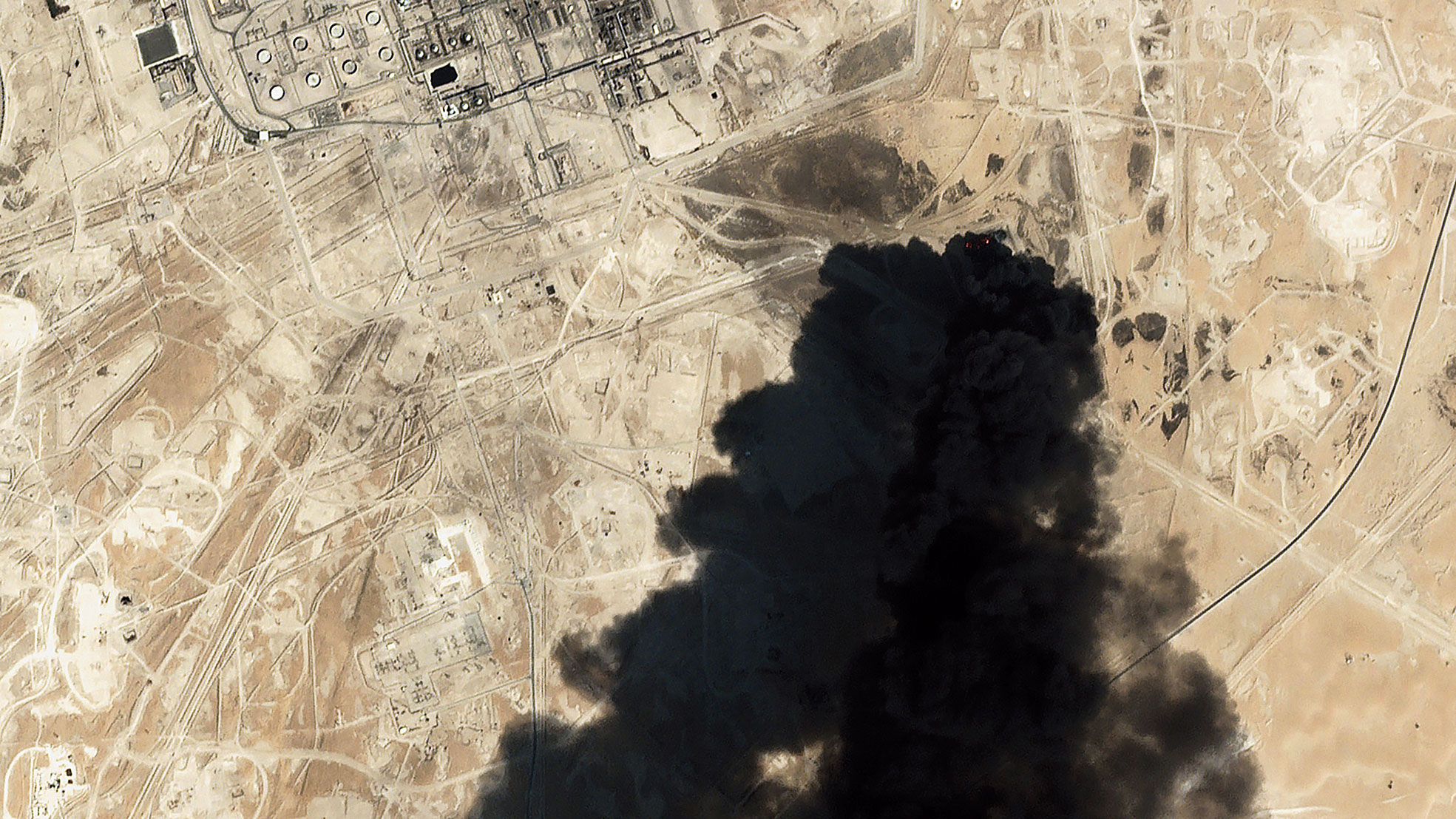 Iran dismissed accusations by the US that it was behind attacks on Saudi oil plants that disrupted world oil production and warned on Sunday that US bases and aircraft carriers in the region were in range of its missiles.

Yemen’s Iran-aligned Houthi group claimed responsibility for Saturday’s attacks that knocked out more than half of Saudi oil output. But US secretary of state Mike Pompeo said there was no evidence the attacks came from Yemen and accused Iran of “an unprecedented attack on the world’s energy supply”.

A senior Revolutionary Guards commander warned that Iran was ready for “full-fledged” war and that US military assets were within range of Iranian missiles.

“Everybody should know that all American bases and their aircraft carriers in a distance of up to 2,000km around Iran are within the range of our missiles,” the head of the Revolutionary Guards Corps Aerospace Force, Amirali Hajizadeh, was quoted as saying by the semi-official Tasnim news agency.

State-run oil company Saudi Aramco said the strikes would cut output by 5.7 million barrels per day, or more than 5 per cent of global crude supply, at a time when Aramco is gearing up for a stock market listing.

The kingdom, the world’s top oil exporter, ships more than 7 million barrels of oil to global destinations every day, and for years has served as the supplier of last resort to markets.

“Abqaiq is the nerve centre of the Saudi energy system. Even if exports resume in the next 24-48 hours, the image of invulnerability has been altered,” Helima Croft, global head of commodity strategy at RBC Capital Markets, told Reuters.

Saudi authorities have yet to directly blame any party for Saturday’s pre-dawn strikes, which they said involved drones, but the energy minister linked it to a series of attacks on Saudi oil assets and crude tankers in Gulf waters.

US secretary of state Pompeo said there was no evidence the attacks came from Yemen, where a Saudi-led military coalition has been battling the Houthis for over four years in a conflict widely seen as a proxy war between regional rivals Sunni Muslim Saudi Arabia and Shia Iran.

Riyadh has accused Iran and its proxies of being behind previous attacks claimed by the Houthis on oil pumping stations and Shaybah oilfield, charges Tehran denies.

Some Iraqi media outlets said the attack originated from Iraq, where Iran-backed paramilitary groups have wielded increasing power but Iraq denied this on Sunday and vowed to punish anyone who intended to use Iraq as a launchpad for attacks in the region.

Regional tensions have escalated after Washington quit an international nuclear deal and extended sanctions on Iran to choke off its vital oil exports, a move supported by US Gulf allies Saudi Arabia and the United Arab Emirates.

“Amid all the calls for de-escalation, Iran has now launched an unprecedented attack on the world’s energy supply,” Pompeo said in a Twitter post on Saturday.

Turkey, an ally of Iran, condemned the attack but called for avoiding “all sorts of provocative steps” that could damage regional security and stability, the foreign ministry said.

A senior Emirati official said the UAE, Riyadh’s main partner in the western-backed military coalition in Yemen, would fully support Saudi Arabia as the assault “targets us all”.

The UAE, concerned about rising tensions with Iran and western criticism of the Yemen war, in June scaled down its military presence, leaving Riyadh to try to neutralise the Houthis to prevent Iran from gaining influence along its border.

The White House on Sunday did not rule out a potential meeting between President Donald Trump and Iranian President Hassan Rouhani.

White House adviser Kellyanne Conway said the attacks on Saturday “did not help” prospects for a meeting between the two leaders during the United Nations General Assembly this month but she left open the possibility it could happen.

However, Conway said, “You’re not helping your case much,” by attacking Saudi Arabia, civilian areas and critical infrastructure that affects global energy markets.