The workers, who lived in trailers hidden from view, had been promised jobs helping to build the temple with standard work hours and ample time off 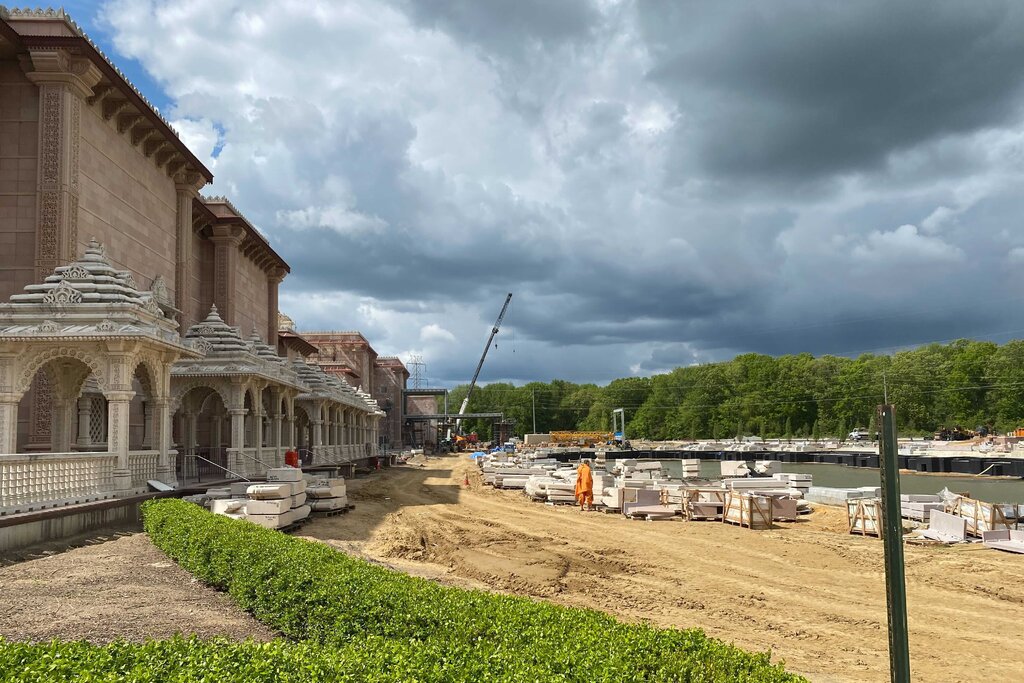 Federal law enforcement agents descended on a massive temple in New Jersey on Tuesday after workers accused a prominent Hindu sect of luring them from India, confining them to the temple grounds and paying them the equivalent of about $1 an hour to perform gruelling labour in near servitude.

In a lawsuit filed on Tuesday, lawyers for the labourers said Bochasanwasi Akshar Purushottam Swaminarayan Sanstha, a Hindu sect known as BAPS that has close ties to India’s ruling party and has built temples around the world, had exploited possibly hundreds of low-caste men in the years-long construction project.

A spokeswoman for the FBI confirmed agents were on the grounds of the temple in rural Robbinsville, New Jersey, but would not comment further. The action is believed to be connected to the claims of labour and immigration law violations, according to several people familiar with the matter. A spokesman for the department of homeland security declined to comment.

The workers, who lived in trailers hidden from view, had been promised jobs helping to build the temple with standard work hours and ample time off, according to the lawsuit, a wage claim filed in US district court in New Jersey. The majority are Dalit.

They were brought to the US on religious visas, or R-1 visas — temporary visas used for clergy and lay religious workers such as missionaries — and presented to the US government as volunteers, according to the claim. They were asked to sign several documents, often in English, and instructed to tell US embassy staffers that they were skilled carvers or decorative painters, the complaint said.

Lawyers for the men, however, said they did manual labour on the site, working nearly 13 hours a day lifting large stones, operating cranes and other heavy machinery, building roads and storm sewers, digging ditches and shovelling snow, all for the equivalent of about $450 per month.

“I respectfully disagree with the wage claim,” Kanu Patel, the chief executive of BAPS, told The New York Times, while noting he was not in charge of day-to-day operations at the site.

Lenin Joshi, a spokesman for BAPS, also disputed the accusations, saying the men did complicated work connecting stones that had been hand-carved in India. “They have to be fit together like a jigsaw puzzle. In that process, we need specialised artisans,” Joshi said, saying this work qualified the men for the visas.

“We are naturally shaken by this turn of events and are sure that once the full facts come out, we will be able to provide answers and show that these accusations and allegations are without merit,” Joshi said.

The lawsuit said the men’s passports were confiscated, and they were confined to the fenced-in and guarded site, where they were forbidden from talking to visitors. They subsisted on a bland diet of lentils and potatoes, and their pay was docked for minor violations, such as being seen without a helmet, according to the claim.

“They thought they would have a good job and see America. They didn’t think they would be treated like animals, or like machines that aren’t going to get sick,” said Swati Sawant, an immigration lawyer in New Jersey who is also Dalit and said she first learned of the men’s plight last year.

She said she secretly organised the temple workers and arranged legal teams to pursue both wage and immigration claims.

BAPS describes itself as “a spiritual, volunteer-driven organisation dedicated to improving society through individual growth by fostering the Hindu ideals of faith, unity and selfless service”.

Over the years, the organisation has grown into a global enterprise made up of both for-profit and non-profit entities. It builds temples around the world that draw visitors with awe-inspiring white stone spires, intricate carvings, gurgling fountains and wandering peacocks.

The New Jersey temple is itself a multimillion-dollar operation, public records show. It opened in 2014 but is still under construction as BAPS has tried to fulfill its aim of building the largest Hindu temple in the country. Located near Princeton, the temple draws followers from across the region.