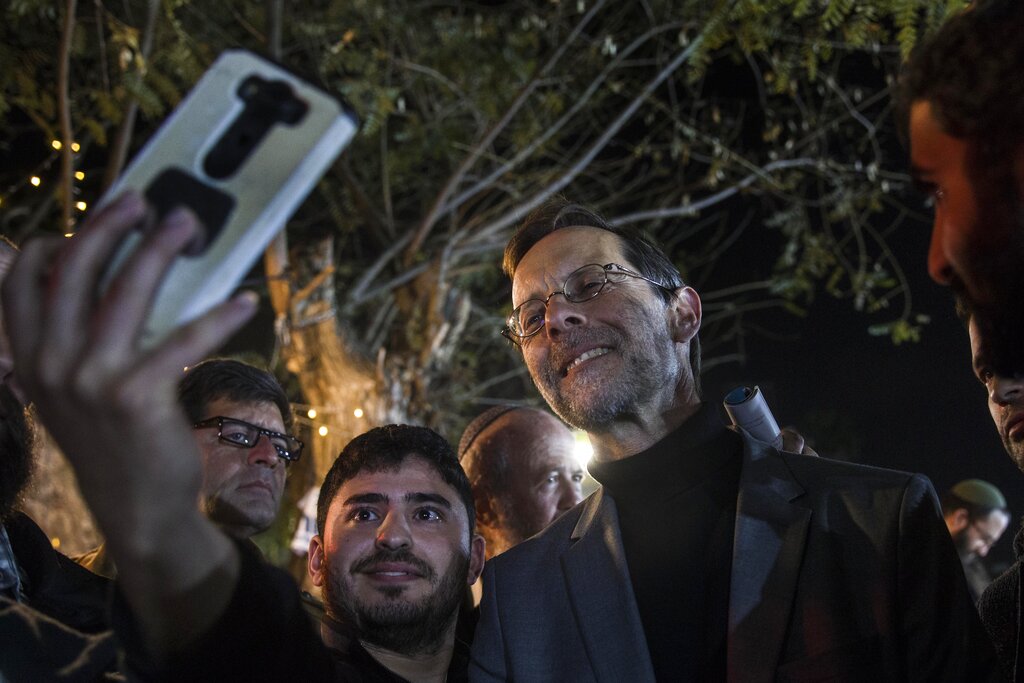 The Cinderella story of Israel's current election campaign is a fringe party led by an ultranationalist libertarian with a criminal record who vows to legalise marijuana, and seems to diverge dramatically from the long list of quirky candidates of the past who have drawn attention to their improbable runs for parliament.

For starters, Moshe Feiglin's Zehut party has a real shot of getting elected and could even emerge as a kingmaker in a tightly contested race for prime minister. But his seemingly liberal civic platform, which has generated a strong hipster following, could be masking a far more polarising agenda.

Feiglin, who got pushed out of the ruling Likud party four years ago for his extreme right-wing positions, has taken the campaign by storm, putting cannabis high on the national agenda and forcing the front-runners to take a stand on the issue. He's also one of the few party leaders to refrain from endorsing either Prime Minister Benjamin Netanyahu or his top challenger, retired military chief Benny Gantz.

'We are in nobody's pocket,' Feiglin told Israel's Army Radio recently. 'Legalisation is the condition for us joining any government.'

The message seems to be catching on, ironically, in the first election in 20 years that the single-issue Green Leaf party has refrained from running. In response to what has been dubbed the 'Feiglin effect', Netanyahu this week boasted about increasing the availability of medical cannabis and approving its export, making Israel just the third nation in the world to do so. He also promised to 'examine' the issue of legalisation for recreational use.

Labour Party leader Avi Gabbay said he was in favour of legalising, calling cannabis less dangerous than alcohol. In a radio interview, he then disclosed he had smoked it himself in the past. And the dovish Meretz party, seeking to reclaim what would seem to be its natural electorate, issued a reminder that it was the first party in parliament to promote the issue while others were now merely catching up.

But Feiglin, an observant, Jewish West Bank settler who doesn't smoke marijuana himself, has been the one cashing in, finding an unlikely audience among urban youngsters drawn to his message of personal freedom and domestic policies, which, besides legalisation, include an anti-labour union platform that promotes school vouchers, animal rights and free market economics.

With his skullcap, trim beard and small round-frame glasses, the 56-year-old Feiglin hardly cuts the image of an iconoclast. But he's become an Internet sensation with viral animated online hipster memes portraying him as a cool gangster with sunglasses and a joint hanging from his lips.

Expand your horizons man. Awaken the #3rdEye within. Eat some #shrooms, shave off your eyebrows, paint yourself green. Vote #Zehut and soon grass, ganja, the green, the Morrocan moss, the Jamaican G, the velvet scruff, whatever u call it, will be as easy to buy as bubble gum. 🐲 pic.twitter.com/FjSD2fIsnH

It's a stunning makeover for a man who first made his name in Israel for orchestrating raucous protests against the Oslo Peace accords in the early 1990s. A recent cartoon in the Maariv daily poked fun at the irony of his drawing liberal supporters. Cast as the pied piper, Feiglin is shown leading a slew of smiling, glassy-eyed voters following the trail of smoke from a joint he is holding in the air.

'Feiglin is a revelation to young, secular supporters of the center-left,' explained commentator Yaron Dekel in the YNet news site. 'He emphasises that he is primarily liberal when it comes to the issue of religion and state, and a staunch supporter of the legalization of marijuana, but is hiding an extremely hawkish platform in every other arena.'

The political manifesto of Feiglin's Zehut — Hebrew for identity — party includes canceling signed agreements with the Palestinians, making Israeli Arab citizens pass a loyalty test and offering financial incentives to them to emigrate elsewhere if they refuse to accept Jewish sovereignty over the land.

He's also spoken out against women, gays and reform Jews. In 1995, shortly before Yitzhak Rabin was assassinated, his Zo Artzeinu (This is our Land) movement blocked dozens of major intersections that wreaked havoc throughout the country. The Supreme Court later sentenced him to six months in prison for sedition against the state, which was later commuted to community service.

Feiglin, who refused an Associated Press interview, has downplayed his past as an ultranationalist activist and insists he is currently focused on civic issues alone. In reinventing himself, he has managed to create the latest iteration of a regular Israeli election ritual of obscure and offbeat lists offering an entertaining diversion to those voters despairing over Israel's weighty issues.

Previous parties have included a faction calling for the establishment of a national casino and a group led by a fishmonger and puppeteer that tried to abolish bank fees. An offshoot of Green Leaf aligned with elderly Holocaust survivors to make a run in 2009 and four years later its castaways ran as the Israeli Pirate Party, offering a platform promoting a variety of personal freedoms, including the right to sail the high seas.

Should Zehut manage to cross the electoral threshold, it would join the likes of the Israeli Pensioners Party that managed to win seven seats in the 2006 election and joined Prime Minister Ehud Olmert's Cabinet. Seen largely as the recipient of protest votes against the system, the group of retirees led by an octogenarian former spymaster disappeared in the next election.

Feiglin's Zehut party, however, could prove to have a greater impact if it eventually has a say in who forms the next government. Columnist Shmuel Rosner called its emergence a 'deliberate, cunning distraction' that reflects the dire state of discourse and overall disgust with mainstream politics.

'It is the proof — and not the first — of the difficulty the public has in addressing complex issues that require expertise and in-depth study,' he wrote Thursday in Maariv. 'Everyone has despaired and only wants to be given something to dull their senses. It could be that the marijuana in the campaign is simply medical cannabis to relieve pain.'

Cannabis is legal, Canada is on a high