Ahead of Israel's April 9 elections, Netanyahu has zoned in on Arab lawmaker Ahmad Tibi 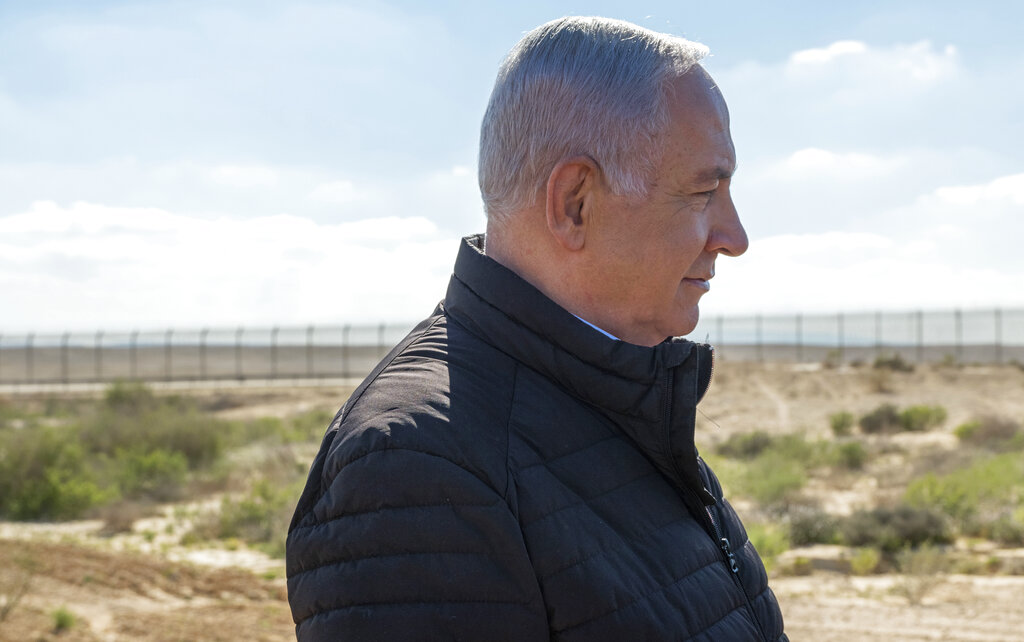 When Prime Minister Benjamin Netanyahu has run into political trouble in the past, he has lashed out at the media, the political opposition and Israel's Arab minority with incendiary and divisive language to galvanise his nationalist base.

Ahead of the April 9 elections, Netanyahu has zoned in on prominent Arab lawmaker Ahmad Tibi.

The Israeli leader, slumping in the polls after the dramatic announcement of his pending corruption indictment, is portraying Tibi as a threat to national security in a charged campaign that critics say questions the loyalty of the country's Arab citizens.

Using his own nickname, Netanyahu has been repeating a campaign mantra: 'Bibi or Tibi.' The snappy slogan, eagerly parroted by his hard-line allies, highlights Netanyahu's efforts to paint his challengers as weak 'Leftists' conspiring with Arab Israelis and a hostile media to oust him.

It also shines a spotlight on Tibi — an affable, media-savvy political veteran who speaks fluent Hebrew. Tibi is known for his harsh criticism of government policies toward the country's Arab citizens and toward Palestinians who live under Israeli control in territories Israel captured in 1967.

'Until this week, I didn't know that against my will I was a leading candidate for Prime Minister,' he said with a smile from his home in an Arab neighbourhood of Jerusalem.

Arab lawmaker Ahmad Tibi during an interview with the Associated Press at his home in Jerusalem.
AP

Despite the humour, Tibi said he is concerned about what he views as Netanyahu's attempt to demonise Israel's Arab minority.

'He is delegitimising the Arab parties, the Arab lawmakers and the Arab public in general,' he said. 'He's trying to transmit that it is either me, the supposed patriotic Jewish leader, or the Arabs will take over the country and decide who will be the prime minister. And he portrays this as a nightmare.'

Arabs make up about 20 per cent of Israel's 9 million residents. They hold full citizenship rights but have faced decades of discrimination.

The outgoing Netanyahu-led government further stoked tensions by passing a controversial law that defines Israel as the nation-state of the Jewish people. A parliamentary panel recently recommended banning an Arab party from running in the election, while Netanyahu has courted anti-Arab extremists in hopes of improving his re-election chances.

Part of Netanyahu's typical stump speech these days alleges that his prime challenger, ex-military chief Benny Gantz, will be unable to build a ruling coalition without the backing of Arab parties. Arab parties never sat in an Israeli coalition government, and they say they have no interest in doing so now.

Gantz has been quick to reject the association, flaunting his tough military record of pounding Gaza militants and saying he would not rely on the Arab bloc in parliament to stabilise a future government.

The charge nonetheless is part of the Netanyahu campaign playbook that has worked before.

Fearing a possible loss on election day in 2015, Netanyahu mobilised his supporters by releasing a frantic midday video in which he warned that Arab voters were heading 'in droves' to the polls. The move, for which he later apologised, appeared to help turn the tide and secure another term for him.

If he wins again, he's expected to walk back his rhetoric once more, said Yohanan Plesner, president of the non-partisan Israel Democracy Institute.

Plesner said Netanyahu tends to speak in two voices about the Arab minority.

He said Netanyahu has earmarked unprecedented budgets to Arab communities to try to close the wide economic gaps between Arabs and Jews.

But during election campaigns, Netanyahu attempts to mobilise his base, Plesner said. Netanyahu 'recruits the ultimate 'other' of Israeli life, which is the Arab minority', he said. 'It is cynical, and it is effective.'

Such rhetoric will encourage more Arab voters to sit out the election, said Thabet Abu Rass, co-director of the Abraham Fund Initiatives, a non-profit dedicated to promoting equality in Israel.

'A lot of people are now saying we cannot continue to play the game and pretend Israel is a state for all its citizens,' he said. 'And they'll say we have to highlight this by boycotting the election.'

At the same time, many Israeli Jews, especially among Netanyahu's right-wing base, consider the Arab minority disloyal for sympathising with the Palestinians and other Arab adversaries. A decade ago, Arab lawmaker Azmi Bishara fled into exile after he was accused of spying for Hezbollah — a charge he denied.

The 60-year-old Tibi illustrates many of the contradictions faced by Israel's Arabs. He's worked as a gynecologist in Israeli hospitals and served for years as a member of parliament, but also advised Yasser Arafat, the late Palestinian leader.

For the past two decades, Tibi has advocated for Arab rights in Israel and for a Palestinian state. Hard-line lawmakers frequently brand him a fifth-column in the Israeli legislature.

But he is also considered the most popular Arab lawmaker, even among Israeli Jews. He is a regular on their television screens, known for his witty quips.

In parliament, he's earned praise for his environmental and consumer legislation and for his promotion of Holocaust commemoration that touched many Jews.

In the current election campaign, he has refrained from endorsing any of Netanyahu's challengers, wary of playing into the prime minister's hands. Tibi said he is ill at ease with the leadership of the Blue-and-White party, which includes Gantz and two other former chiefs of what he calls the 'occupation army.'

But he makes no qualms about wanting to unseat Netanyahu, whom he accuses of 'Arab hatred' and of leading Israel down a dangerous path by deepening control over the occupied West Bank and its millions of Palestinians.

'It's possible that Benjamin Netanyahu is leading us toward a binational state, and then it will either be an apartheid state in which only the Jews can vote or a democratic country in which there is one person, one vote,' he said. 'If that happens, tomorrow I will run against Bibi. Then it will really be Bibi or Tibi.'