In 2019, two Texas newspapers revealed details of hundreds of alleged predators of sexual abuse within the church over the previous two decades 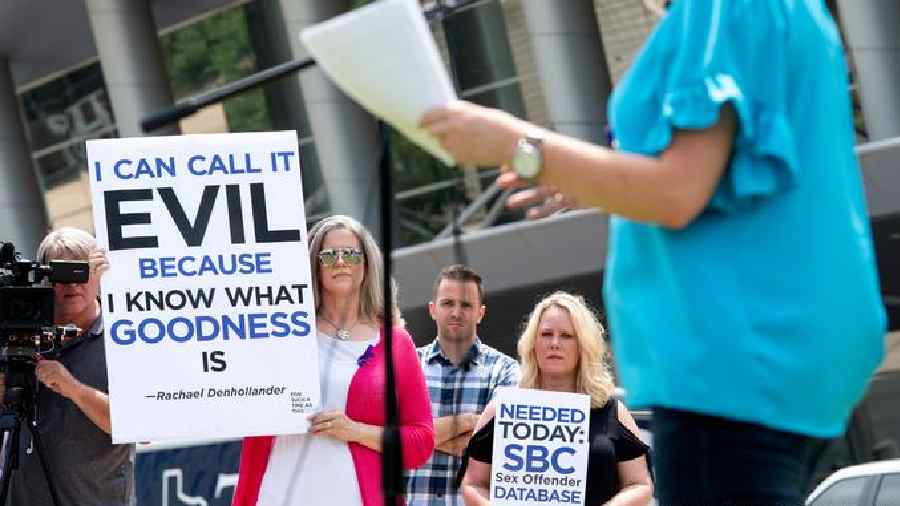 Victims and their allies have been protesting against sexual abuse in the Southern Baptist church for years
Deutsche Welle
Deutsche Welle   |   Published 13.08.22, 03:47 PM

Leaders of the Southern Baptist Convention said Friday the church was being investigated by the US Justice Department following a scandal over its handling of sexual abuse over decades.

The Convention promised to "fully and completely" cooperate with the probe into several of its entities, which it said would help to "transparently address the scourge of sexual abuse."

The Southern Baptists are the largest Protestant denomination in the US, with thousands of churches and 15 million members, mostly in southern states.

Why are the Southern Baptists facing investigation?

In 2019, two Texas newspapers revealed details of hundreds of alleged predators and more than 700 victims of sexual abuse within the church over the previous two decades.

The report, which took seven months, found that many cases were simply ignored or covered up.

The committee was also found to have secretly maintained a list of clergy and other church workers accused of abuse.

The list contained hundreds of entries — some of them partially or fully redacted — detailing allegations and some cases were not reported to the police.

Some of the allegations relate to the sexual abuse of children as young as five years old.

Many of the offenders have now been criminally convicted, had civil judgments against them or confessed their actions.

Following the report, the church voted to find a way to track pastors and other church workers credibly accused of sex abuse and launch a new task force to oversee further reforms.

There was no immediate comment from the Justice Department about the probe.

Southern Baptist sex abuse survivor Christa Brown, who has long demanded a thorough investigation into sex abuse in the church, celebrated the news of the DOJ probe.

Another survivor, Jules Woodson, who went public with her abuse story in 2018 and reacted by tweeting, "May justice roll down!!!"

Oklahoma pastor Mike Keahbone, who serves on the Executive Committee and is the vice chair of the new abuse task force, wrote on Twitter that the investigation "is not something to fear ... If there is more work to do, we will do it."