Over the weekend, incoming alerts and rocket salvos sent crowds of beachgoers running for cover and closed down many of the city’s famed restaurants and bars 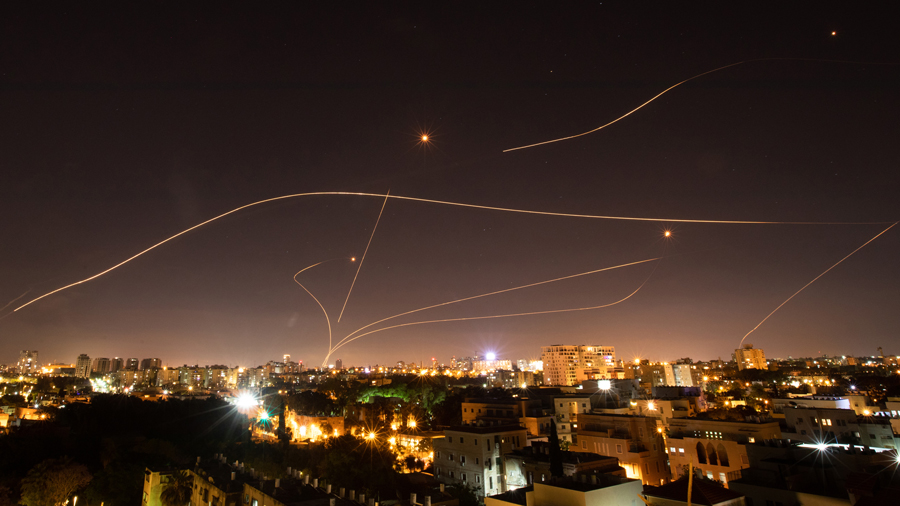 Israel’s Iron Dome missile defense system intercepts rockets launched into Tel Aviv from the Gaza Strip, May 16, 2021. The largely liberal, secular beachside city has a reputation for being a hedonistic bubble. But during the past week, Tel Aviv has been targeted by at least 160 rockets.
Corinna Kern/The New York Times
Isabel Kershner   |   Tel Aviv   |   Published 18.05.21, 12:33 AM

That was before the rockets began to strike.

During the past week of fighting between Israel and militant groups in Gaza, Tel Aviv has been the target of at least 160 rockets fired out of the Palestinian coastal enclave about 40 miles to the south.

Over the weekend, incoming alerts and rocket salvos sent crowds of beachgoers running for cover and closed down many of the city’s famed restaurants and bars.

Tel Aviv has been the target of rocket fire in past rounds of fighting, but not with anything like the intensity of the past few days. And while the military says its Iron Dome anti-missile defence system intercepts about 90 per cent of rockets heading for populated areas, when large barrages are fired, some slip through.

Shahar Elal, 30, an Israeli who was back for a family visit from her current home in Zurich,  said she and her mother had rushed to shelter in a protected space behind the kitchen of a beachside cafe as a siren sounded on Saturday afternoon, frightened after being caught off guard.

“Beer in hand, sun lotion on face, we ran,” she said, dropping a wallet along the way. When they emerged, they saw the white smoke trail of a rocket that had fallen into the sea in front of them.

One day last week, during business hours, militants fired about 100 rockets in the direction of Tel Aviv and its environs, saying they were retaliating for Israeli airstrikes against what they described as civilian buildings.

The incoming fire sent close to a million Israelis into bomb shelters. On Saturday, one man, Gershon Franko, 55, was killed by shrapnel after a rocket slammed into the middle of the road outside his apartment in the Tel Aviv suburb of Ramat Gan.

Often referred to as the “State of Tel Aviv”, this largely liberal, secular beachside city and its metropolitan area have long had a reputation for being somewhat detached from the dangers of the less affluent, more peripheral parts of the country that are close to its volatile borders.  Many residents of this city of skateboards, surfing and electric scooters are said to live in a hedonistic bubble.

“It’s a kind of an escape,” said Sagi Assaraf, 31, a medical engineer, explaining the Tel Aviv state of mind while sitting on the beach with a beer and some friends on Sunday, a day after they all had to run from the same stretch of sand looking for cover.