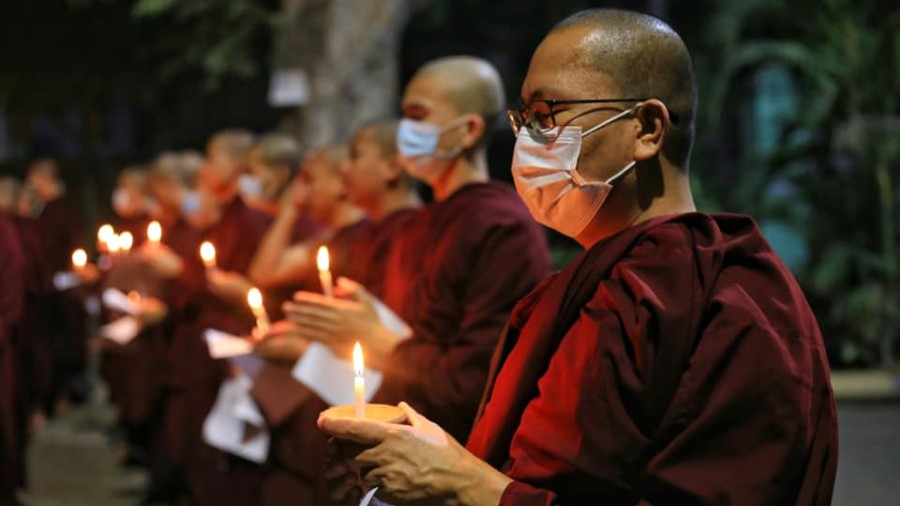 Myanmar’s most powerful Buddhist monks’ association called on the junta to end violence against protesters and accused an “armed minority” of torture and killing innocent civilians since last month’s coup, media said on Wednesday.

In its most forthright condemnation of the military’s bloody crackdown on pro-democracy demonstrations, the government-appointed organisation also said in a draft statement its members intended to halt activities, in an apparent protest.

The State Sangha Maha Nayaka Committee planned to release a final statement after consulting the religious affairs minister on Thursday, the Myanmar Now news portal said, citing a monk who attended a meeting of the committee.

Monks have a long history of activism in Myanmar and were at the forefront of a 2007 “Saffron Revolution” against military rule, an uprising that, although suppressed, helped usher in democratic reforms.

Committee members could not immediately be reached for comment, but their reported stance would signal a significant rift between authorities and a group that usually works closely with the government.

Myanmar has been in turmoil since the military ousted Aung San Suu Kyi’s elected government on February 1, detaining her and members of her party, drawing international condemnation.

Ousted members of parliament, most from Suu Kyi’s party, pushed for a united stand against the coup in the ethnically diverse country, saying the designation of terrorist would be lifted from all autonomy-seeking insurgents fighting for democracy.

More than 180 protesters have been killed as security forces try to crush a wave of demonstrations, the Assistance Association for Political Prisoners activist group says.

Protesters confronted security forces over a sand-bag barricade on one street in the city of Yangon. Police opened intermittent fire and one man appeared to get shot in the head, according to footage on social media.

Reuters could not verify the video. Media reported that authorities forced some Yangon residents to dismantle barricades and threatened to open fire in neighbourhoods that didn’t take them down.

Two protesters were killed in the central town of Kale, the BBC reported, while several hundred people gathered in Demoso town in the east, Pathein in the Irrawaddy river delta and Dawei in the south, pictures on social media showed.

Residents of the second city of Mandalay and the central town of Monywa also reported protests.

A total mobile Internet shutdown made it difficult for protesters to communicate and to verify information. Very few people in Myanmar have access to Wi-Fi.

“We use a guerrilla protest system. We tell people to disperse if security forces come,” Chit Chit Win, a member of a women’s protest group, told Reuters from Dawei.

“We’re avoiding confrontation but doing what we can.”

A team of UN investigators appealed for people to collect documentary evidence of crimes ordered by the military in order to build cases against its leaders.

State-controlled TV in Myanmar on Wednesday reported a prominent businessman as saying he had given Suu Kyi about $550,000 in illegal payments in 2019 and 2020.

The comments made by property developer Maung Weik on MRTV add to the case the junta has begun to make against Suu Kyi, who could face a long prison sentence if convicted.