Staff prepare to leave US mission in Chengdu 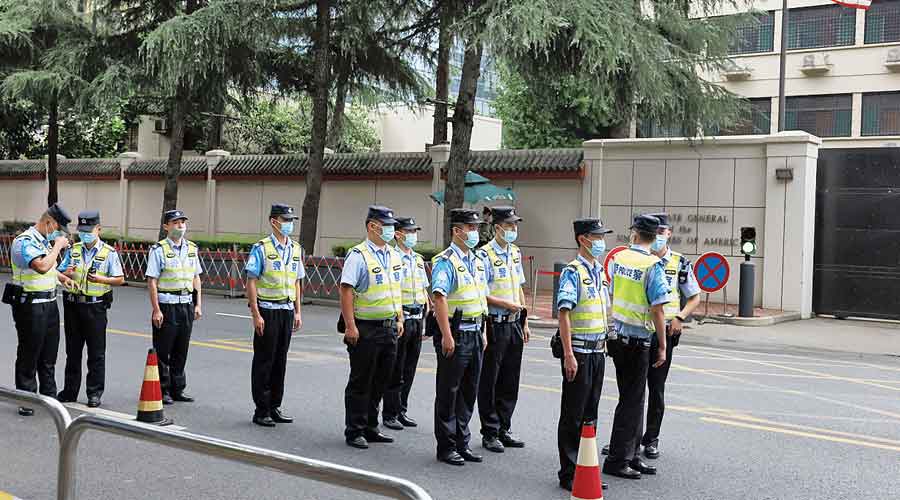 Security was tight outside the US consulate in the Chinese city of Chengdu on Saturday as staff inside prepared to leave, a day after China ordered it to close in response to a US order for China to shut its consulate in Houston.

The tit-for-tat consulate closures have brought a sharp deterioration in relations between the countries, which have the world’s two largest economies.

Shortly after the Houston closure order took effect on Friday, a group of men who appeared to be US officials were seen forcing open a back door to the facility.

China’s ministry of foreign affairs said on Saturday that violated international and bilateral agreements and China would respond, without elaborating how.

In Chengdu, a US consulate emblem inside the compound was taken down and staff could be seen moving about. Three removal vans later entered the compound.

Police gathered outside and closed off the street to traffic in the southwestern Chinese city.

A steady stream of people walked along the street opposite the entrance throughout the day, many stopping to take photos or videos before police moved them on.

Plain clothes officers detained a man who tried to hold up a sign. It was not clear what the sign said.

Neither the consulate nor the US embassy in Beijing have responded to requests from Reuters for comment on the closure.

The order to close came after the Trump administration had given China until 4pm (local time) on Friday to vacate its Houston consulate.

US secretary of state Mike Pompeo said the consulate had been “a hub of spying and intellectual property theft”.

The US consulate in Chengdu was also given 72 hours to close, or until 10am (local time) on Monday, the editor of China’s Global Times tabloid said on Twitter.

The consulate opened in 1985 and has almost 200 employees, including about 150 locally hired staff, according to its website. It was not immediately clear how many are there now after US diplomats were evacuated from China because of the coronavirus pandemic.

Residents in Chengdu expressed mixed views on the closure of the US consulate there. “What I fear the most is the US won’t just stop there, it might get uglier,” said 19-year-old university student Zhang Chuhan. “I approve. The US closed our consulate, I think we should shut theirs too,” said a man who identified himself as Jiang, 29.

Relations between Washington and Beijing have deteriorated this year to what experts describe as their lowest level in decades over issues ranging from trade and technology to the pandemic.