From Myanmar to Mexico, journalists continue to risk their lives to deliver the news 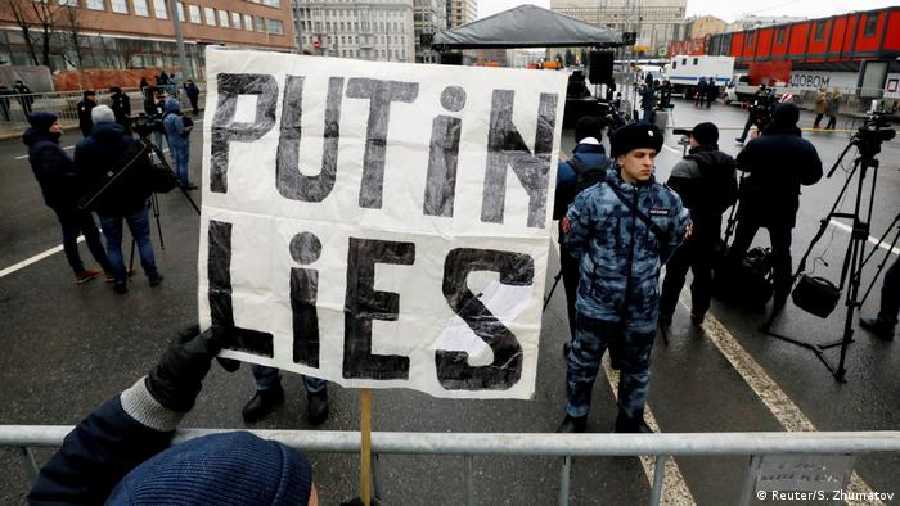 Russia has clamped down on internet freedom and international media since its invasion of Ukraine
Deutsche Welle
Deutsche Welle   |   Published 03.05.22, 05:45 PM

The Russian government has taken complete control of news and information to manage the public's view of the country's invasion of Ukraine, Reporters Without Borders (RSF) said on Tuesday as it published the latest World Press Freedom Index.

The Paris-based campaign group said Russian President Vladimir Putin had established extensive wartime censorship at a level not seen since the Soviet Union, launching a massive disinformation campaign to justify the conflict.

Russia, which was previously ranked just 150 out of 180 countries as a result of a decadelong crackdown on independent media, has fallen a further five places in the latest index to 155, below Zimbabwe, Sudan and Libya.

At least 20 journalists and media workers have died or been injured since Russian tanks rolled into Ukraine on February 24, according to the National Union of Journalists of Ukraine.

Putin's clampdown on non-compliant media and journalists began before the war. Since 2017, about 90 media outlets and individuals have been labeled "foreign agents" and forced to shut down and/or flee the country.

Reporters Without Borders said the Kremlin's influence stretches to the media in neighboring former-Soviet countries, like Belarus, which is ranked 153rd in the Press Freedom Index. A growing number of Belarusian media outlets have been labeled "extremist," which means that reading and sharing their content on social networks is subject to criminal prosecution.

Following his disputed election win in 2020, Belarusian strongman Alexander Lukashenko was denounced internationally after he ordered a plane carrying exiled opposition journalist Raman Pratasevich to be diverted to Minsk last May. More than 20 media workers are currently in prison in Belarus.

Once again, the World Press Freedom Index reveals the dangers that journalists and many media outlets face in reporting on world events, in the face of increasing authoritarianism.

Hong Kong, for example, registered the steepest drop in the ranking, falling 68 places to 148th, as Beijing continues to extend its information control over the semi-autonomous Chinese territory. Saudi Arabia (166th), meanwhile, has been labeled as having some of the world’s worst prisons for journalists.

Myanmar's military coup last year sparked an extremely harsh repression of journalists, which saw the country fall to 176th in the rankings. The Taliban's seizure of power in Afghanistan (156th) also further worsened conditions for reporters and news organizations, who are often the targets of intimidation and violence.

Reporters Without Borders also highlighted how journalists often risk death while reporting from conflict zones or on the work of criminal gangs. Mexico (127th), where at least seven journalists were murdered in 2021 and already eight this year, remains the world's deadliest country for the media and ranks 179th of 180 in the index.

Several reporters were killed in the Middle East over the past year, including in Lebanon (130th), where Lokman Slim, a journalist and critic of Islamist militant group Hezbollah was found dead near his car. Others died covering the conflicts in Yemen and between Israel and the Palestinians.

In Turkey (149th), local newspaper editor Gungor Arslan was shot dead in front of his office in February, while radio host Hazim Ozsu was gunned down by a listener last March. Iran (178th), meanwhile, has seen an increase in arbitrary arrests and convictions of journalists.

Reporters Without Borders also singled out North Africa as a region where press freedom has declined significantly, with many journalists in Morocco (135th) or Algeria (134th) in jail, prosecuted or barred from traveling. The campaign group said the absence of a genuine government in Libya (143rd) and Sudan (151st) has prevented the establishment of press freedom and acceptable working conditions for reporters.

Other countries that saw large falls in the press freedom rankings in 2022 were Botswana (95th), Kuwait (158th) and Cyprus (65th). In South America, Nicaragua (160th) entered the index's red zone following a fierce crackdown on dissenting voices by the government of Daniel Ortega, who won a fourth term as president in the November election, described internationally as a sham.

Politicians around the world have taken a leaf out of former US President Donald Trump's book, fueling anti-media rhetoric around the term "fake news" while spreading their own disinformation. This was particularly noticed in Brazil (111th), with President Jair Bolsonaro seeking reelection in October.

The United States, on the other hand, moved up a modest two places in the index to 42nd thanks to the Biden administration reinstating regular White House and federal agency press briefings. However, Reporters Without Borders noted that the "systematic polarization of the media" and a "climate of animosity and aggression towards journalists" remain.

As the Covid-19 pandemic abates, anti-lockdown and anti-vaccine protests have drawn animosity toward journalists, particularly in Europe and the Americas. Reporters in Germany, France, Italy and the Netherlands were physically attacked, while elsewhere they faced insults and threats from demonstrations.

Canadian reporters also faced hostile treatment and even death threats while covering the Freedom Convoy protests against the government's Covid curbs in January and February. Canadian officials also arrested journalists covering an Indigenous protest against an oil pipeline in British Columbia. As a result, the country slipped five places to the 19th position in the index.

Netherlands drops out of top 10

While Norway (1st) remains at the top of the index, the Netherlands has fallen out of the top 10 and now lies in 28th place after the murder of journalist Peter R. De Vries, who was gunned down in July last year. Greece (108th) has replaced Bulgaria (91st) in last place in Europe after the killing of veteran crime journalist Giorgios Karaivaz.

Some EU and neighboring governments were singled out for stepping up draconian laws against journalists, especially in Slovenia (54th), Poland (66th), Hungary (85th) and Albania (103rd).

The United Kingdom (24th) was criticized for allowing WikiLeaks publisher Julian Assange to be extradited to the United States on espionage charges over the publication of classified military documents.

On a positive note, Reporters Without Borders noted that the European Union has started to implement protective measures for journalists and press freedom, and has launched proceedings against Hungary for violating European law.