Russia has rerouted internet in occupied Kherson through Russia, a watchdog says 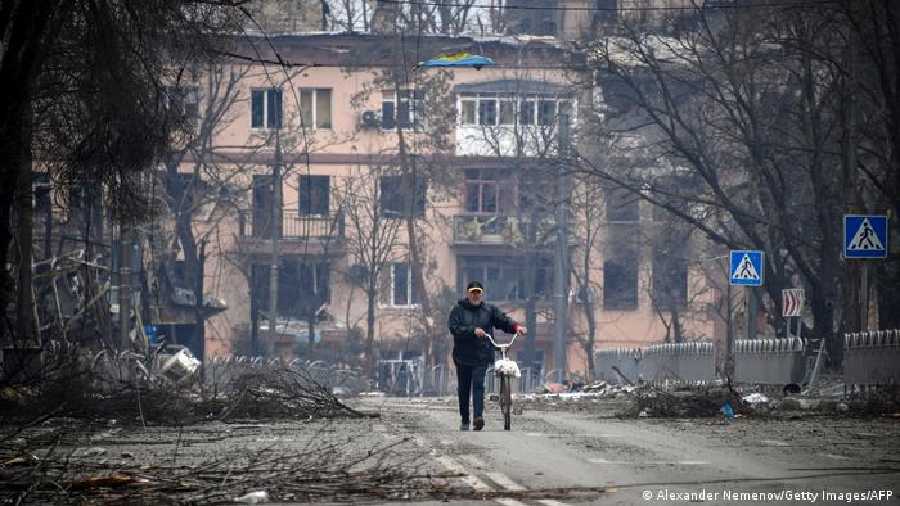 US Senate Majority Leader Chuck Schumer hopes an emergency aid package can go for a floor vote next week.

This article was last updated at 10:15 IST

The war in Ukraine would have a lasting negative impact on the Russian military ability to deploy a conventional military force, the UK Ministry of Defence said.

"Russia's military is now significantly weaker, both materially and conceptually," it said in its latest military intelligence update.

It points to Russia's defense budget doubling between 2005 and 2018 but the country still failing to dominate Ukraine.

"Failures both in strategic planning and operational execution have left it unable to translate numerical strength into decisive advantage," the update stated.

Inflation rising in developed economies, partly fueled by the war in Ukraine

Australia's central bank has increased interest rates for the first time in more than 11 years.

Ending record-low rates, the bank cited inflation levels that had "picked up more quickly, and to a higher level, than was expected."

Prime Minister Scott Morrison, who is in the middle of an election campaign, has insisted that inflation results from worldwide trends, including COVID-19 and the war in Ukraine.

"We are still feeling the effects of the rather extraordinary economic times that we are living in," Morrison said ahead of the announcement.

The Reserve Bank of Australia raised the primary lending rate by 25 basis points to 0.35%, the first increase since November 2010.

The US Federal Reserve was widely expected to raise its key interest rate by 0.5 percentage points after meeting on Wednesday, as was the Bank of England.

Western economies have consistently held their interest rates at or near the unprecedented level of 0 ever since the 2008 global financial crash.

The war in Ukraine would likely keep pressure on prices.

Russia's Defense Ministry said more than one million people had been taken to Russia from Ukraine since the war began.

It included 11,550 people, including 1,847 children, in the past day, "without the participation of the Ukrainian authorities," state-owned news agency TASS quoted Defence Ministry official Mikhail Mizintsev as saying.

He added they "were evacuated to the territory of the Russian Federation from the dangerous regions" of Donetsk, Luhansk and other parts of Ukraine.

In an interview on Monday, Ukrainian President Volodymyr Zelenskyy told Greek state TV ERT a million Ukrainians have been "illegally taken to Russia, or other places, against their will."

Josep Borrell, the EU's top diplomat, said during a visit to Panama that "there will be more Russian banks that will leave SWIFT."

SWIFT is the global banking communications system that permits money to be wired around the globe.

Melnyk was also critical that the Gepard tanks Germany had promised as of yet were without ammunition as none has been located.

The Mariupol city council said on Facebook that evacuations will continue Tuesday.

"With the support of the UN and the Red Cross, the evacuation of civilians has been agreed for tomorrow," the city council wrote, adding that the attempt to start the latest round of evacuations will begin at 7:00 a.m.

Anja Wolz, the emergency coordinator for Ukraine for Doctors Without Borders, told newspapers of Germany's Funke media group that the humanitarian situation in the Ukrainian port city of Mariupol "is a total catastrophe."

"Bucha, Irpin and Hostomel are just the tip of the iceberg," Wolz said.

The three towns are suburbs of Kyiv where mass graves, bodies with signs of obvious torture and distress were found along with murdered civilians who were left on the streets following a weeks-long occupation and subsequent withdrawal of Russian forces.

Wolz stressed: "It is currently almost impossible to get aid supplies to Mariupol," the besieged port city in southeastern Ukraine.

"People there are on their own," she said.

UK to announce £300 million in military aid for Ukraine

British Prime Minister Boris Johnson plans to announce during a remote address to the Ukrainan parliament, known as the Verkhovna Rada, his country's plans to provide an additional £300 million (roughly €360 million or $375 million) in military aid for Ukraine.

Johnson's speech will be the first to the Ukrainian parliament since the February 24 Russian invasion of Ukraine.

In his address, he plans to note that, "When my country faced the threat of invasion during the Second World War, our parliament -- like yours -- continued to meet throughout the conflict," according to an excerpt of his prepared remarks released by the prime minister's office.

One teenager dead and another wounded in Odesa missile strike

Ukrainian President Volodymyr Zelenskyy said in his nightly video address that one 14-year-old boy had died and a 17-year-old girl was injured when a missile struck the southern port city of Odesa.

"How did these children and the dormitory threaten the Russian state?" Zelenskyy asked.

Internet service disruption monitor NetBlocks said Russia has rerouted internet traffic in the Ukrainian region of Kherson, which it currently occupies, through Russia to tighten its grip on information and exert control.

On Saturday, the region of Kherson faced a nearly full internet blackout, NetBlocks said. When the internet was restored, traffic was rerouted through Russia, with NetBlocks noting on its website that the internet in Kherson was "hence likely now subject to Russian internet regulations, surveillance, and censorship."

Russian-appointed authorities in areas of Kherson said the region would adapt the Russian currency, the ruble, beginning May 1.

US warns Russia plans to annex parts of eastern Ukraine

The US warned Moscow plans to formally annex parts of eastern Ukraine, specifically the regions of Luhansk and Donetsk, after Russia failed to take the Ukrainian capital Kyiv.

Michael Carpenter, US ambassador to the Organization for Security and Cooperation in Europe (OSCE), said, "Russia plans to engineer referenda upon joining sometime in mid-May."

He added Russia also has a similar plan for the Kherson region. Carpenter told reporters in Washington the US believes "the reports are highly credible."

The new focus sees Russia shifting to capitalizing on existing territorial gains in the east while pounding the southern port city of Odesa.

The US Senate Majority Leader Chuck Schumer said he hopes the Senate will bring to a floor vote US President Joe Biden's $33 billion request for emergency aid to Ukraine as soon as next week.

In remarks in the Senate, the New York Democrat said, "Quickly approving this emergency funding is essential to helping the people of Ukraine in their fight against Russia."

Summary of Monday's events in Russia's war on Ukraine

Ukraine also said that a Russian strike has hit a strategically key road and rail bridge in the coastal city of Odesa that had already been damaged in previous strikes. The loss of this logistical route would obstruct the supply of weapons and other goods from neighboring Romania.

Lavrov made the comments during a 42-minute discourse on an Italian television channel owned by former prime minister Silvio Berlusconi. The comments were widely condemned, including by Israeli Prime Minister Nafttali Bennett and Foreign Minister Yair Lapid, Italian Prime Minister Mario Draghi and Felix Klein, the antisemitism commissioner for the German government, among other leaders. Israel also summoned the Russian ambassador and demanded an apology.

Altogether 3,153 civilians have been confirmed killed in military actions since the start of the Russian invasion of Ukraine on February 24, the UN human rights office (OHCHR) said, though the actual number is expected to be much higher.

Additionally, more than 5.5 million people have fled Ukraine since the Russian invasion, the UN Refugee Agency (UNHCR) said and at least 7.7 million people are displaced within Ukraine.

The Russians said they shot down a MiG-29 near Slovyansk in eastern Ukraine while the EU warned that Russia may end its supply of gas to member states at any moment, following Moscow's decision to stop exports to both Poland and Bulgaria.

Russia has demanded that "unfriendly countries," including the EU, pay for their imports in rubles following sanctions against Russia's central bank. The European Commissioner for energy, Kadri Simson, said that attempts to pay for gas and oil in rubles, even with a workaround, would constitute a breach of the EU's sanctions.

Simson said that the 27 member states would begin to stockpile gas in preparation for a possible breakdown in Russian fuel imports.