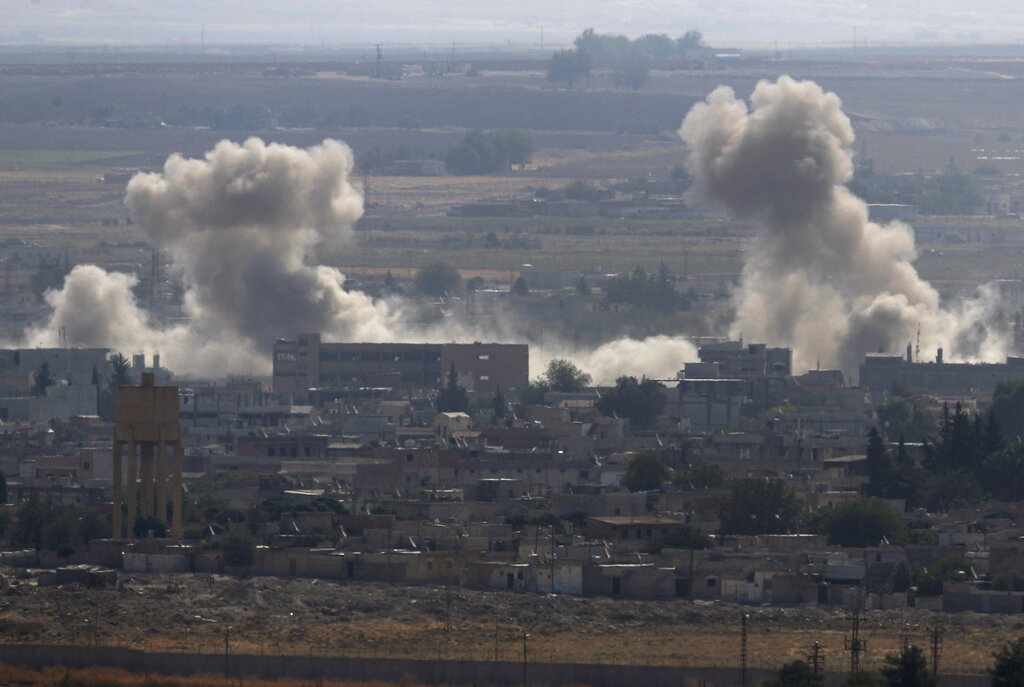 In this photo taken from the Turkish side of the border between Turkey and Syria, in Ceylanpinar, Sanliurfa province, southeastern Turkey, smoke and dust billows from targets in Ras al-Ayn, Syria, caused by bombardment by Turkish forces, Tuesday, Oct. 15, 2019.
AP
Carlotta Gall And Patrick Kingsley/ NYTNS   |   Turkey   |   Published 15.10.19, 08:04 PM

Russia said on Tuesday that its military units were patrolling territory in northern Syria between Syrian and Turkish forces after the American withdrawal from the area, underscoring the sudden loss of US influence in the area and illustrating how the power balance in the region has shifted rapidly in the past week.

The announcement that Russian forces were now patrolling an area where the US had until Monday maintained two military bases appeared to signal that Moscow was moving to fill a security void left by the withdrawal of both the American military and its partners in an international counterterrorism mission.

Videos circulating on social media appeared to show a Russian-speaking man filming himself walking around a recently evacuated US military base in northern Syria.

The Russian defence ministry said in a statement that its military police, which had already established a presence in other parts of Syria, were patrolling “the northwestern borders of Manbij district along the line of contact of the Syrian Arab Republic military and the Turkish military”.

It added that its troops were coordinating “with the Turkish side” and that “the Syrian government army has taken full control of the city of Manbij and nearby populated areas”.

The developments on Tuesday came as a spokesman for the US-led coalition said on Twitter that its forces, which include French and British soldiers, had left the formerly Kurdish-held town of Manbij. “Coalition forces are executing a deliberate withdrawal from northeast Syria,” Col Myles B. Caggins wrote. “We are out of Manbij.”

Russia and Turkey will soon be the only international armies in the area.

Turkish and Syrian troops are racing to control large parts of northern Syria that were run by an autonomous Syrian Kurdish government until a Turkish-led invasion began last Wednesday.

On Tuesday, Syrian government troops were deployed inside the northern city of Manbij, a Syrian state broadcaster said, as Turkish-led forces advanced in the countryside outside the city. Elsewhere, Kurdish-led fighters attempted to retake the strategic Syrian border town of Ras al-Ain from Turkish-led forces.

Heavy fire from machine guns could be heard to the south and southwest of Ras al-Ain and from the Turkish border town of Ceylanpinar, which is less than a mile from the fighting. Turkish artillery pounded an eastern suburb of the Syrian settlement midmorning, raising clouds of smoke above low farmhouses and pistachio groves.

As of Tuesday, fighting in Ras al-Ain and other areas in northern Syria has forced at least 160,000 people from their homes, according to UN estimates. The Kurdish authorities put the figure at 270,000.

The battle highlighted the fluctuating nature of the Turkish incursion, which began last Wednesday after President Trump ordered the evacuation of American troops from the Turkish-Syrian border, opening the door for Turkish troops and their Syrian Arab proxies to enter Kurdish-held territory in northern Syria.

The White House decision drew global condemnation and left Kurdish fighters feeling betrayed, and the situation has quickly turned into a blood bath.

Abandoned by the Americans, and quickly losing land to the Turkish force, the Kurdish authorities sought protection from the Syrian government and its largest backer, Russia.