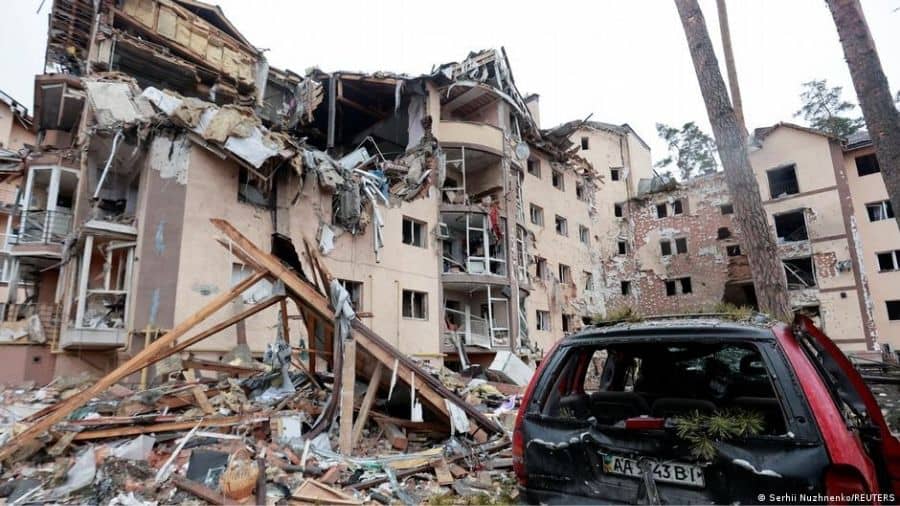 Russia said its forces had stopped firing near two besieged Ukrainian cities on Saturday to allow safe passage to civilians fleeing fighting, but officials in one of the cities said Moscow was not fully observing the limited ceasefire.

The Russian defence ministry said its units had opened humanitarian corridors near the cities of Mariupol and Volnovakha which were encircled by its troops, as Russia's invasion of Ukraine entered into its 10th day.

But in Mariupol, the city council said Russia was not observing the ceasefire and asked residents to return to shelters and wait for further information on evacuation.

The southeastern port has endured heavy bombardment, a sign of its strategic value to Moscow due to its position between Russian-backed separatist-held eastern Ukraine and the Black Sea Crimean peninsula, which Moscow seized from Ukraine in 2014.

"This night the shelling was harder and closer," a staff member from Doctors without Borders/Medecins sans Frontieres (MSF) said, according to the aid agency, adding there was still no power, water, heating or mobile phone links and food was scarce.

The Ukrainian government said the plan was to evacuate around 200,000 people from Mariupol and 15,000 from Volnovakha, and the Red Cross is the ceasefire's guarantor.

Despite the limited ceasefire plans, the Russian defence ministry said a broad offensive would continue in Ukraine, where it denies targeting civilians or invading, calling its actions a "special military operation".

Russian forces were carrying out strikes on military infrastructure and forces from separatist-held Donetsk were tightening the encirclement of Mariupol, Defence Ministry spokesman Igor Konashenkov said.

"We are simply being destroyed," Mariupol Mayor Vadym Boychenko said.

Aid agencies have warned of a humanitarian disaster across the country as food, water and medical supplies run short. The number of refugees could rise to 1.5 million by the end of the weekend from a current 1.3 million, the head of the United Nations refugee agency said on Saturday.

Women and small children crossed at the Medyka checkpoint in southeastern Poland in freezing conditions. A man crossing the other way yelled at the crowd that men should return to Ukraine and fight.

One woman, struggling to carry half a dozen bags, wept when the snacks she had packed for her and her young son, who was clutching a green dinosaur toy, fell to the ground. She gave the boy a bag to carry as they trudged slowly on.

President Vladimir Putin launched the invasion on Feb. 24 after weeks of massing troops near Ukraine and his actions have drawn almost universal condemnation around the world. Officials in Ukraine have reported thousands of dead and wounded civilians and many countries have imposed heavy sanctions on Russia.

Moscow says its aim is to disarm its neighbour, counter what it views as NATO aggression and capture leaders it calls neo-Nazis. On Saturday it accused the West of acting like a bandit and threatened to retaliate without giving details.

"As you understand, there must be a corresponding response to economic banditry," Kremlin spokesman Dmitry Peskov said.

NO TO NO-FLY ZONES

Ukraine says Russian forces have focused efforts on encircling Kyiv and Kharkiv, the second-biggest city, while aiming to establish a land bridge to Crimea.

Kyiv, in the path of a Russian armoured column that has been stalled outside the Ukrainian capital for days, was again under attack, with explosions audible from the city centre.

But British intelligence said on Saturday the overall rate of Russian air strikes and artillery over the past 24 hours had been lower than in previous days although Russian forces were believed to be advancing in the south of Ukraine.

Ukrainian media outlet Suspilne cited authorities in Sumy, about 300 km (190 miles) east of Kyiv, as saying that there is a risk of fighting in the city's streets, urging residents to stay in shelters.

Ukrainian President Volodymyr Zelenskiy was expected to press Washington for more help in a video call with the U.S. Senate at 9:30 a.m. ET (1430 GMT) on Saturday.

At a meeting on Friday, NATO allies rejected Ukraine's appeal for no-fly zones, saying they were increasing support but that stepping in directly could make the situation worse.

"Please close the sky ... because people are dying," said Solomiya Zdryko, 18, who fled from Lviv in western Ukraine.

U.S. Secretary of State Antony Blinken was visiting Poland on Saturday and was set to discuss security and humanitarian assistance with Polish officials. Poland has taken in the vast majority of those fleeing Ukraine.

Ukraine's Defence Minister Oleksii Reznikov said 66,224 Ukrainian men had returned from abroad to join the fight against Russia's invasion. "These are 12 more combat and motivated brigades! Ukrainians, we are invincible," he said in an online post.

"Units of the invaders are demoralized, soldiers and officers of the occupying army continue to surrender, flee, leaving weapons and equipment on Ukrainian soil," it said, adding that at least 39 Russian planes and 40 helicopters had been destroyed.

Reuters has not been able to independently verify such accounts from either side.

Russian forces have made their biggest advances in the south, where they captured their first sizeable Ukrainian city, Kherson, this week. Bombing has worsened in recent days in the northeast cities of Kharkiv and Chernihiv.

Russia's parliament passed a law on Friday imposing a prison term of up to 15 years for spreading intentionally "fake" news about the military.

Russia is blocking Facebook for restricting state-backed channels and the websites of the BBC, Deutsche Welle and Voice of America.