Moscow should find a way out of war: Zelensky 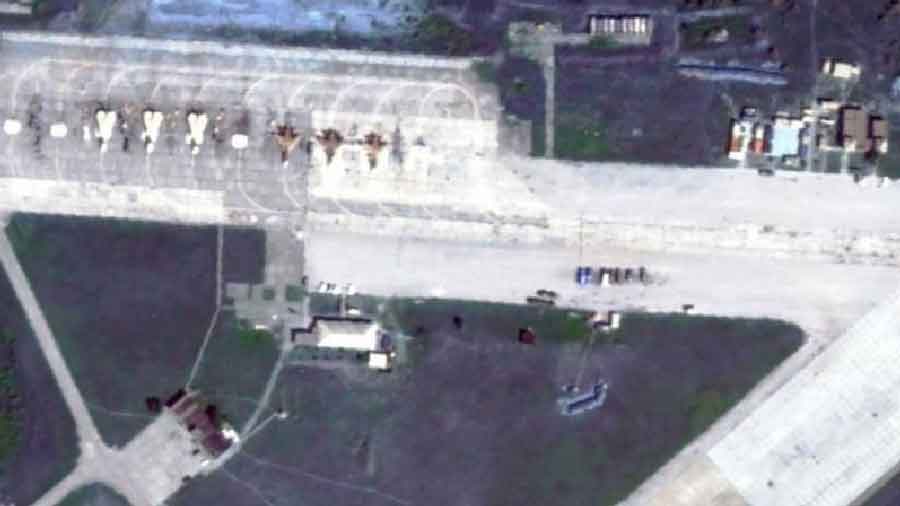 With satellite images showing at least eight wrecked warplanes after explosions at a Russian air base in Crimea, President Volodymyr Zelensky of Ukraine said late on Wednesday that Moscow’s mounting losses should persuade its leadership to “find a way out of the war”.

Pictures released by Planet Labs, a satellite imaging company, on Wednesday appeared to show at least three blast craters in areas where planes were parked near the runways at the Saki Air Base, on the western Black Sea coast of Russia-occupied Crimea, leaving blackened debris.

Russia has played down damage from the explosions on Tuesday, which a senior Ukrainian military official has said was the result of an attack by Ukrainian forces and partisan fighters. But with the images indicating an expensive and serious blow to the Russian military, Zelensky alluded to the episode for the first time in his nightly address, and he put the number of lost Russian warplanes at nine.

“In just one day, the occupiers lost 10 combat aircraft: nine in Crimea and one more in the direction of Zaporizhzhia,” he said Wednesday night. The New York Times has reviewed satellite imagery of the Saki Air Base, collected by Planet Labs hours before and a day after the explosions.

The pictures show at least eight destroyed aircraft, both Su-24 and Su-30 warplanes, all parked on the base’s western tarmac. The planes cost tens of millions of dollars each. In addition, two buildings near the aircraft appear to have been destroyed, and damage and large burn marks were observable elsewhere at the military base. Other parts of the base appeared intact, including several helicopters and a large ammunition depot.

A senior Ukrainian official has said that the blasts were an attack carried out with the help of partisans, but was not more specific, and the Ukrainian military has not publicly acknowledged any involvement. Military analysts have said that Ukraine does not have missiles that can reach the base from territory it controls, well over 100 miles away, and that Ukrainian jets would have been unlikely to penetrate that far into Russia-controlled airspace.

Russia’s defence ministry has played down the extent of the damage. But witness reports of multiple explosions at the base — and videos and photographs posted to social media showing plumes of smoke rising from the scene and what appeared to be the nose cone of a jet — were piercing the Kremlin’s narrative.

Yury Podolyaka, a prominent pro-Russian military blogger who is known for posting daily updates from the front lines, called the explosions “an act of sabotage coupled with negligence”. Nuclear power plant The US supports calls for ade militarised zone around Ukraine’s Zaporizhzhia nuclear power plant after fighting involving Russian and Ukrainian forces in the vicinity of the plant, a state department spokesperson said.