As high temperature becomes more frequent around the world, how can affected areas adapt to remain livable? 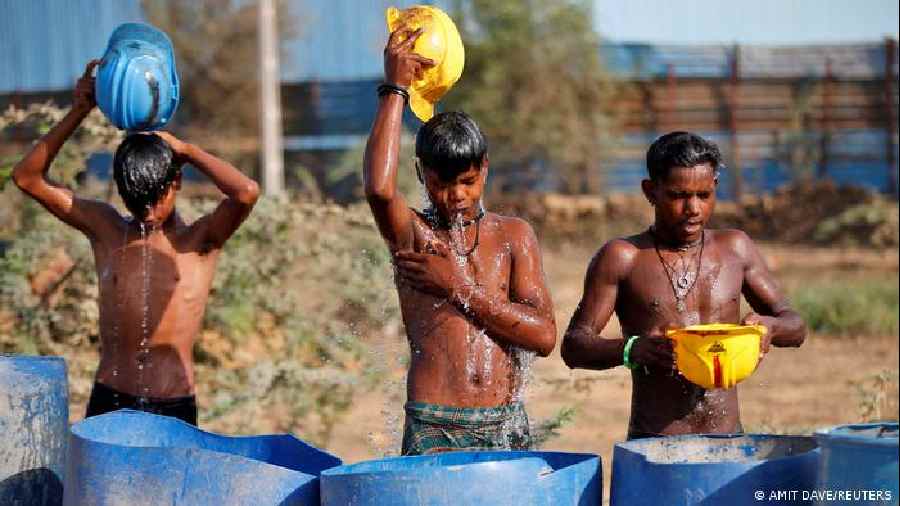 Workers use their helmets to pour water to cool themselves off near a construction site on a hot summer day on the outskirts of Ahmedabad, India
Deutsche Welle
Deutsche Welle   |   Published 15.07.22, 02:56 PM

Earlier this spring, the effects of India's heat wave, one of dozens just this year, were all-encompassing. Temperatures topping 40 degrees Celsius across the country put millions at risk for heat-related illnesses, decimated wheat crops, intensified a power crisis and interrupted schooling.

India is not alone. Neighboring Pakistan was also battling scorching temperatures before summer has even begun. And earlier this year, central South America was the hottest place on the planet before Western Australia claimed the title.

As the climate crisis exacerbates heat waves around the world and temperatures increasingly soar unseasonably early, countries are faced with the question of how to remain livable.

It comes down to wealth and preparedness

Ramping up electricity bills with air conditioning, cooling down with fans, working indoors — these options are only available to a privileged few.

"The story of climate change is one of high inequality and we're seeing that playing out already in the poorest and hottest regions of the world," said Tamma Carleton, assistant professor of economics at UC Santa Barbara's Bren School of Environmental Science and Management.

Carleton co-authored a 2022 study that distilled a city's ability to minimize deaths during extreme temperatures to two main factors: affluence and the number of hot days it experiences.

Money decides which technologies a city can afford to shield its most vulnerable. And when these adaptation costs aren't covered by the state, the burden falls on individuals to finance their own protection, says Carleton. A situation that leaves the poorest high and dry.

But even wealthy cities can suffer if they are caught off guard without an action plan. That happened in the Pacific Northwest of the US, a wealthy region known for its temperate climate, where more than 100 people were killed in last year's heat wave.

Just how high this death risk is in developing countries became clear when Ahmedabad, a city in western India's Gujarat state, lost more than 1,344 people as thermometers hit 47 Celsius in 2010.

The toll spurred the city into action. In 2013, it rolled out a plan that has prevented about 1,100 heat induced deaths each year since, according to a study.

The first heat action plan in South Asia, it includes an early warning system, community outreach to vulnerable populations and education for health staff about possible signs of heat exposure. It also organizes cooling centers in buildings such as temples and malls as well as reduced or staggered working times for outdoor laborers, among other things.

As India's temperatures consistently surpass the baseline in spring and summer months, the Ahmedabad heat plan has since served as a template for similar models in 23 of the country's 28 states.

"The focus has shifted significantly in the last couple of years from merely protecting human health and mortality against extreme heat to more proactive measures," said Mukherjee. "These include changing building by-laws so that new constructions are better insulated, and the cool roofs program."

A low-cost solution to reduce indoor temperatures, the cool roofs program primarily targets badly insulated houses in slums where informal workers and other vulnerable groups reside. When a roof is coated with materials like lime-based whitewash or white tarp, it becomes more reflective and absorbs less heat.

Ideas like these are budding around the world. The Japanese capital Tokyo has introduced cool pavements, which work with thermal-barrier coating, for example. Medellin in Colombia has planted "green corridors," vegetated passages that offer more shade in public spaces, while the city of Toronto, Canada, offers grants for people to install green or cool roofs.

Some cities have introduced heat officers, whose task it is to coordinate the response to rising temperatures.

Eugenia Kargbo became Africa's first heat officer when she took the post in Freetown, Sierra Leone. A goal of hers is to provide reflective market shade covers that protect women selling produce outdoors. To make the capital more livable, she has also introduced a tree planting program, in which planters can collect micro-payments on an app.

"This is the future I envision for my children and all the children in Freetown: A safe environment not limited by the risk of extreme heat," she told DW's EcoAfrica.

Focus on the climate crisis

Even as some regions find ways to alleviate some of the effects of scorching heat waves, many scientists emphasize that governments shouldn't forget the root cause of the rising temperatures: the climate crisis.

Aditi Mukherji, who co-authored the water chapter in the IPCC's assessment on "Impacts, Adaptation and Vulnerability," says the onus to come up with solutions shouldn't be on the most affected, who historically have emitted the least amount of CO2.

"I feel that when it comes to these kinds of heat extremes, the only solution is that the high emitting countries stop emissions immediately and stop burning fossil fuels," she said.