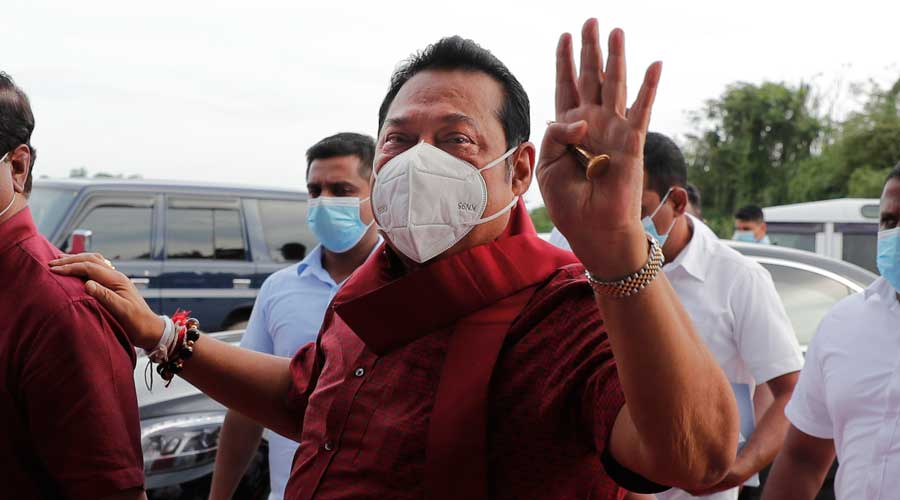 Sri Lanka Prime Minister Mahinda Rajapaksa was poised to stage a political comeback on Thursday as his party took an unassailable lead and was set for a landslide victory in the twice-postponed general elections, according to results announced so far.

Prime Minister Narendra Modi was among the first  to congratulate Rajapaksa on the outcome of the elections and said the two sides will work together to further advance all areas of bilateral cooperation and to take their special ties to ever newer heights.

“Thank you PM Narendra Modi for your congratulatory phone call. With the strong support of the people of #SriLanka, I look forward to working with you closely to further enhance the long-standing cooperation between our two countries. Sri Lanka & India are friends & relations,” 74-year-old Rajapaksa tweeted.

The SLPP has polled more votes than its rivals, scoring over 60 per cent of the total votes in the 16 seats officially declared so far from the South, dominated by the Sinhala majority community.

Unofficial results indicate that the SLPP would comfortably win at least 17 out of the 22 districts on offer.

President Gotabaya Rajapaksa in a tweet described the results as a “magnificent victory” for the ruling party.

“The SLPP has recorded a magnificent victory according to the official results declared so far. I firmly believe that by tomorrow I would be able to form the parliament which is needed to implement my election manifesto,” he said in a statement.

Rajapaksa’s party is expected to win control of the 225-member assembly by a comfortable margin, according to analysts.

In Galle district, the SLPP won seven out of nine seats on offer while in the neighbouring Matara district they won six out of seven seats.

The nearest rival is the new party formed by former presidential candidate Sajith Premadasa who has relegated his mother party, the United National Party (UNP) of former Premier Ranil Wickremesinghe, to the fourth place even below the Marxist Janatha Vimukthi Peramuna (JVP).

The SJB has won only three seats from both districts.

Wickremesinghe’s party is struggling to reach the five per cent mark needed to qualify for any seat in the entire island. He is facing the danger of losing his parliamentary seat for the first time since July 1977.

In the polling division results from other districts where counting is in progress, the SLPP has taken unassailable leads, sources said.

The counting began in the morning after the polls were closed on Wednesday.

SLPP founder and its National Organiser Basil Rajapaksa — younger brother of Gotabaya and Mahinda Rajapaksa — said that the party is all set to form a new government.

President Gotabaya hopes for a two-thirds majority so that he can amend the Constitution to restore presidential powers curbed by a 2015 constitutional change.

The President is not a candidate while caretaker Prime Minister Mahinda is running from the northwestern capital district of Kurunegala. Gotabaya had appointed Mahinda as the Prime Minister of the caretaker cabinet until the general election.