Someone accidentally activated the cat filter during a Pakistani minister's conference, and netizens were delighted 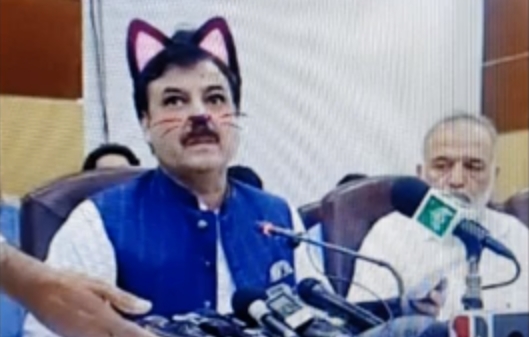 Stills of Minister of Information Shaukat Yousufzai and his fellow ministers with cat ears and whiskers went viral on social media
(YouTube)
Published 16.06.19, 11:51 AM

It was but 'a comedy of errors', when someone streaming a conference by a Pakistani minister live on Facebook, accidentally activated the cat filter, initiating a slurry of memes and humour among netizens. Stills of Minister of Information Shaukat Yousufzai and his fellow ministers with cat ears and whiskers taken from Pakistan Tehreek-e-Insaf's (PTI) provisional page of Khyber Pakhtunkhwa, went viral on social media afterwards.

According to KP government’s social media team we now have a cat in the cabinet #Filter pic.twitter.com/LNl7zwOfLU

The press conference was about the recent decisions made by the provincial Assembly, but the netizens could not get over the mishap. ”Who let the cats out,” said on Twitter user, while another posted: “Positive image of Pakistan is being promoted though a press conference streamed live on Facebook with cat filter on Ministers of KP province.” One Twitter user also said that Yousufzai “looks kinda cute” with the cat ears and whiskers.

Most took the situation lightly, and insisted that the 'mistake' was delightful.

Here is a selection of the onslaught of tweets that captured the 'purrfect' moment.

Pakistan’s Govt officials do a Facebook live and how. With the cat filter on 😺 pic.twitter.com/tURJsY2DGJ

Too much of Filter overdose🤣 #Pakistan Minister Gets Live Online With Cat Filter Switched On.
This I thought was fake till I read the news piece. 😊 Good way to destress #IndvsPak pic.twitter.com/cwfUGhu6nn

Positive image of Pakistan is being promoted though a press conference streamed live on Facebook with cat filter on ministers of KP province.. pic.twitter.com/ihjxarISfe

Meanwhile, Pakistan Prime Minister's party Tehreek-e-Insaf yesterday said that all necessary actions have been taken to avoid such an incident in the future, emphasising on strict enforcement of standard operating procedures (SOP) and protocol for live coverage by the ground teams.

Pakistan tehreek e insaf social media team is deemed to be the pioneers of social media in Pakistan. We not only price power cells in bringing Pakistani politics to internet but also feel content in setting high standards of SOPs#PTISMT
1/4 pic.twitter.com/oMPTu88LZ1