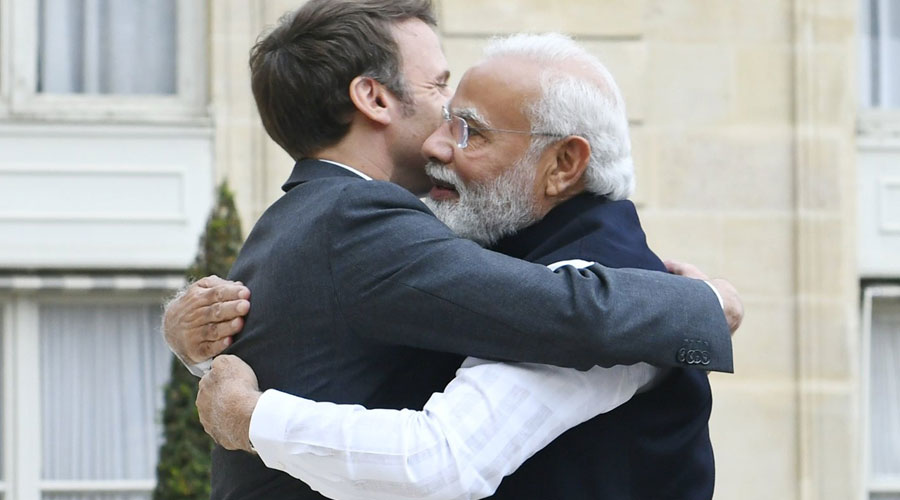 Prime Minister Narendra Modi and French President Emmanuel Macron held extensive discussions on a wide range of bilateral and global issues, including the ongoing conflict in Ukraine, the situation in the Indo-Pacific and terrorism, as they agreed on an ambitious agenda for the next phase of the India-France Strategic Partnership.

Modi, who arrived here from Denmark on the final leg of his three-nation European tour, on Wednesday night held one-on-one and delegation-level talks with Macron, who was re-elected to the top post over a week back.

Modi and Macron held discussions on the entire range of bilateral issues, including cooperation in defence, space, blue economy, civil nuclear and people-to-people ties, the Ministry of External Affairs (MEA) said in a press release.

"Delighted, as always, to meet my friend President @EmmanuelMacron. We talked at length about bilateral as well as global issues. India and France are proud developmental partners with our partnership spread across different sectors," Modi tweeted in English and French languages along with a photograph of him and Macron hugging each other.

The two leaders also took stock of the regional and global security outlook and discussed ways to work together in making the India- France Strategic Partnership a force for global good. The Prime Minister's visit to France displayed the strong friendship and goodwill not only between the two countries but also between the two leaders, the release said.

Tweeting a photograph of his meeting with Modi, Macron said, "Tonight, with @NarendraModi, we discussed the different ongoing international crises as well as our strategic partnership. We also talked about food security issues and the FARM initiative, in which India will play a key role."

According to a joint press statement issued after the meeting, India and France -- in a post-pandemic world, facing global geopolitical challenges -- reaffirmed their commitment to prepare for the future together by further deepening their cooperation, expanding it in new domains to meet emerging challenges and broadening their international partnership.

Besides bilateral cooperation, India and France will continue to develop new partnerships in various formats with like-minded countries in the region and within regional organisations, it said.

"India and France have built one of the premier strategic partnerships for advancing peace, stability and prosperity in the Indo-Pacific region. They share a vision of a free, open and rules-based Indo-Pacific region, based on commitment to international law, respect for sovereignty and territorial integrity, freedom of navigation and a region free from coercion, tensions and conflicts," the statement noted, amidst China's aggressive moves in the strategically important region.

The two leaders also expressed serious concern at the ongoing conflict and humanitarian crisis in Ukraine.

"They unequivocally condemned civilian deaths in Ukraine and called for an immediate cessation of hostilities to bring parties together to promote dialogue and diplomacy to find an immediate end to the suffering of the people," the statement said.

Both countries underlined the need to respect the UN Charter, international law and the sovereignty and territorial integrity of states. The two leaders discussed the regional and global implications of the conflict in Ukraine and agreed to intensify coordination on the issue, it said.

On Afghanistan, India and France expressed serious concern on the humanitarian situation and violation of human rights and reiterated strong support for a peaceful, secure and stable Afghanistan, emphasising respect for its sovereignty, unity and territorial integrity and non-interference in its internal affairs.

"They called for an inclusive and representative government, and respect for the rights of women, children and minorities. They also reaffirmed the UNSC Resolution 2593 (2021) and emphasised on zero tolerance for the use of Afghan territory for spreading terrorism in other parts of the world, and agreed to work together in this regard, including at the UN Security Council," the statement said.

Earlier, the Prime Minister's Office said that the meeting between the two leaders will add momentum to the India-France friendship.

Macron held a tete-a-tete with Modi before the delegation-level talks at the Elysee Palace - the official residence of the French President.

"PM @narendramodi and French President @EmmanuelMacron had a warm and detailed conversation. Agreed on an ambitious agenda for the next phase of the India-France Strategic Partnership. Underlined that the India-France partnership is a force for peace, progress and prosperity," MEA spokesperson Arindam Bagchi tweeted.

"A meeting between two friends. An opportunity to translate the renewed mandate of President @EmmanuelMacron into a renewed momentum for the India-France Strategic partnership," Bagchi had tweeted at the start of the meeting.

On Tuesday, Macron spoke with his Russian counterpart Vladimir Putin and urged Moscow to rise to the level of its responsibility as a permanent member of the US Security Council by ending this devastating aggression, an Elysee statement said.

The Ukraine issue also figured prominently at the second India-Nordic summit attended by Prime Minister Modi and his counterparts from Finland, Iceland, Sweden, Norway and Denmark in Copenhagen on Wednesday.

Modi has said that India believes no country would emerge victorious in the Russia-Ukraine war as all will suffer losses and there will be a "more serious" impact on developing and poor countries.

Soon after his arrival here, Modi had described France as one of India's strongest partners, with both countries cooperating in diverse areas.

Diplomatic sources said Modi's meeting with Macron days after his election victory is highly symbolic. It sends a powerful signal that the two leaders want to make the Indo-French partnership a guiding principle of their foreign policy for the years to come, they said.

It's also a demonstration of the level of personal chemistry between the two leaders, which gives impetus to our joint actions across all fields of cooperation, they said.

His visit comes during the French presidency of the European Union. It also coincides with the 75 years of diplomatic relations between India and France.

India and France, which are strategic partners since 1998, have a multifaceted partnership across the spectrum in defence, civil nuclear, economy, space and maritime security, clean energy and environment, counter-terrorism, people-to-people ties.

India and France are founding members of the International Solar Alliance announced by Prime Minister Modi at UN Climate Change COP21 in November 2015.

Both the countries enjoy a robust economic partnership with a bilateral trade of USD 7.86 billion (2020-21) and cumulative Foreign Direct Investment (FDI) of USD 9.83 billion since April 2000.

Over a thousand French businesses are present in India across sectors like defence, IT, consulting, engineering services and heavy industries. Over 150 Indian companies in France employ more than 7,000 people.

A thriving Indian diaspora in France deepens the cultural connect between both countries.

On the sidelines of the summit in Copenhagen, Prime Minister Modi held separate bilateral meetings with his counterparts from Norway, Sweden, Iceland and Finland.