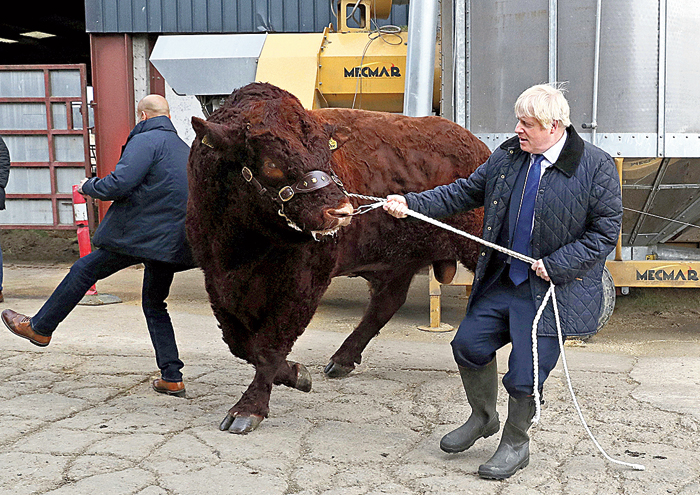 A bull bumps into a plainclothes police officer (left) while being walked by British Prime Minister Boris Johnson during a visit to Darnford Farm in Banchory near Aberdeen, Scotland, on Friday
(AP)
Amit Roy   |   London   |   Published 06.09.19, 09:53 PM

Boris Johnson, still reeling from the resignation of his young brother Jo from his government, had rather more encouraging news on Friday when the High Court in London ruled that it was not illegal for him to prorogue parliament.

But the controversy over the suspension of parliament for five weeks has become something of a side show as Boris will press for a “people vs parliament” general election on Monday — before the Commons is prorogued.

On Wednesday he was unable to get a two-thirds majority needed to trigger a general election when Labour MPs abstained during the vote.

On Monday, in a new motion naming the date of the election as October 15, he will require only a simple majority.

But Labour and other Opposition parties have said they will not agree to a general election until Boris has formally sought an extension to the Brexit process.

On Thursday in a speech in Yorkshire the Prime Minister declared that he would rather be “dead in a ditch” than ask the EU for another extension to the UK’s current departure date from October 31 this year to January 31, 2020.

However, under a motion which is supposed to receive royal assent and become law, he is required to do precisely that.

How he will resolve this contradiction — other than possibly by resigning as Prime Minister — is not clear.

On Friday, a legal challenge brought over his decision to prorogue parliament was rejected by the High Court in London.

But Gina Miller, a Sikh origin campaigner who came to the UK from Guyana, was immediately given leave to appeal. A similar ruling by the court in Edinburgh is also subject to an appeal.

Lord Burnett said: “We have concluded that, whilst we should grant permission to apply for judicial review, the claim must be dismissed.”

The urgent judicial review application brought by Miller — who successfully challenged the government at the High Court in 2016 over the triggering of the Article 50 process to start the Brexit countdown — was supported by a number of other parties, including former Prime Minister Sir John Major.

When the judges ruled in Miller’s favour in 2016, they were attacked by the Daily Mail as “enemies of the people”.

During the current hearing, Lord Pannick QC, representing Miller, told the judges: “The Prime Minister’s decision to prorogue Parliament is contrary to constitutional principle and constitutes an abuse of power. There is no justification for closing Parliament in this way and, accordingly, it represents an unjustified undermining of parliamentary sovereignty which is the bedrock of our Constitution.”

He said the Prime Minister’s decision to advise the Queen to suspend Parliament was “extraordinary” — both because of the “exceptional length” of the suspension and because Parliament will be “silenced” during the critical period leading up to the October 31 deadline.

Sir James Eadie, on behalf of Boris, said: “The exercise of this prerogative power is intrinsically one of high policy and politics, not law.”

Arguing that the claim was “academic”, he pointed out that each House of Parliament will sit before the UK leaves the EU on October 31 “and may consider any matter it chooses”.

Rejecting Miller’s application, Lord Burnett said: “We have concluded that, whilst we should grant permission to apply for judicial review, the claim must be dismissed.”

The judges granted permission for the case to go the Supreme Court for an appeal, which will be heard on September 17.

Speaking outside the Royal Courts of Justice after the ruling, Miller said she was “very disappointed with the judgment”.

“To give up now would be a dereliction of our responsibility. We need to protect our institutions,” she said. “It is not right that they should be shut down or bullied, especially at this most momentous time in history. My legal team and I will not give up our fight for democracy.”

She added: “We feel it is absolutely vital that Parliament should be sitting. We are therefore pleased that the judges have given us permission to appeal to the Supreme Court, which we will be doing, and they feel that our case has the merit to be handed up. Today, we stand for everyone. We stand for the future generations and we stand for representative democracy.”