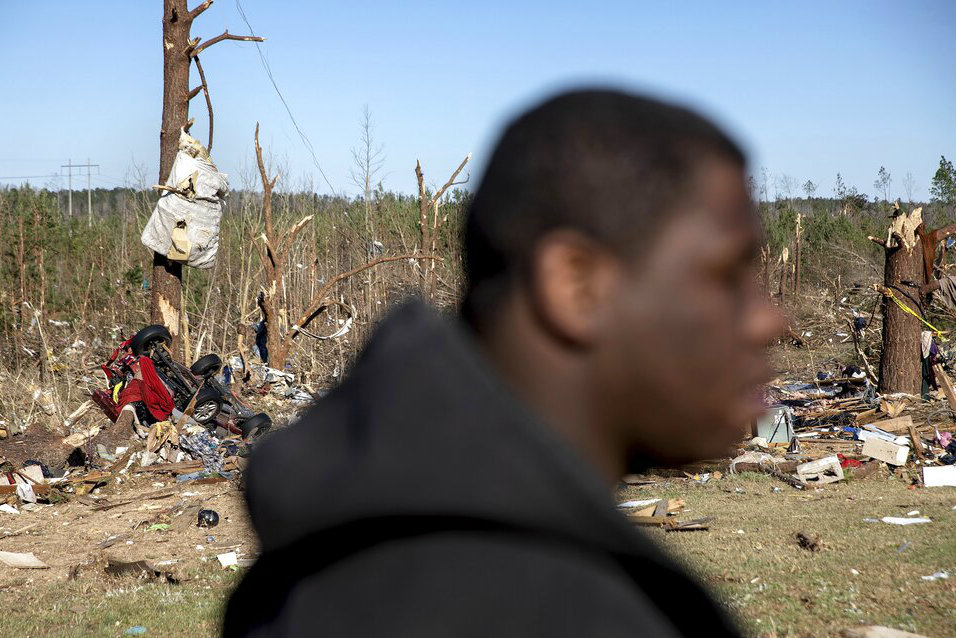 Demetria Jones walks through the damaged neighbourhood where he said he lost ten relatives in a tornado in Beauregard, Alabama, on Tuesday.
AP
AP   |   Beauregard (Alabama)   |   Published 06.03.19, 08:49 AM

Cousins Cordarrly Jones and Demetria Jones have a hard time counting all the relatives they lost to a monster tornado that wiped out a rural community in Alabama.

Their grandparents, 89-year-old Jimmy Jones and 83-year-old Mary Louise Jones, were killed in their home on a two-lane road where most everyone shares family ties.

Stunned by the loss of 10 relatives and worried about still more who are hospitalised with serious injuries, the cousins stood on Tuesday amid the wreckage of a row of family homes in tiny Beauregard, near the Georgia state line.

'It really hasn't fully hit me yet. I'm still trying to process it,' said Cordarrly Jones, 29.

“Everybody in this area just about was related,' said Demetria Jones, 28. 'It's devastating.'

With winds of as much as 275 kph, the deadliest US tornado in nearly six years rolled mobile homes across fields and caused even brick homes to collapse into unrecognizable heaps. At least 23 people were killed, some of them children. The full scale of the loss came into focus with the release of the names of the dead. The youngest victim was 6, the oldest 89.

Debris litters the neighbourhood where multiple members of the same family were killed in a tornado in Beauregard.
AP

It was the deadliest tornado to hit the US since May 2013, when an EF5 twister killed 24 people in Moore, Oklahoma. The enormous twister apparently churned for about 110 km, crossing the state line and ending in neighbouring Georgia, the National Weather Service said. Government teams that surveyed Sunday's damage confirmed there was an outbreak of at least 20 twisters in Florida, Alabama, Florida and South Carolina.

On Tuesday, the search for bodies, pets and belongings continued in and around Beauregard amid the din of beeping heavy machinery and whining chain saws. Sheriff Jay Jones said the list of the missing shrunk from dozens to just seven or eight.

Richard Tate, who is part of the same family and lost four close relatives, said he was lucky to be alive. 'It could have taken all of us the way it was moving,' said Tate, who was inside his home with his wife when the structure was destroyed.

Bernard Reese, a distant relative of the Jones cousins, picked through the remains of his aunt's house on Tuesday. He said he found more than a half-dozen bodies or fatally injured residents along Lee County 39, the road where so many of the family members died.

'It bothers me, but it had to be done,' said Reese, who lives about 2 miles away. He arrived in his truck after the twister passed and climbed over downed trees and power lines to get to the scene.

'I keep seeing it. I ain't slept worth a crap,' said Norwood, 46. He suffered a fractured vertebra when the twister hit the mobile home he shared with his wife, but he said both are fine.

The bloated corpse of a gray horse lay on the ground beside the couple's home. Norwood said he had to euthanize the animal after the storm because it suffered a serious leg injury.

The extent of the damage and death left him shaken.

The Jones cousins, who survived at least in part because don't live on the road where their relatives died, said they had to talk their way past police barricades to get to the scene. Officers, they said, kept asking for something to prove they were related to the victims.

'I just had to tell them that everything that proves who I am is out on that road,' Cordarrly Jones said.