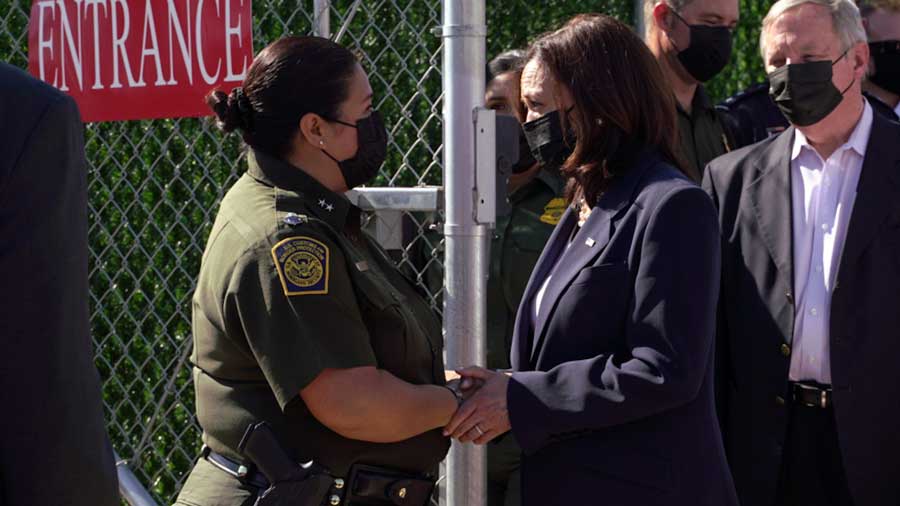 Vice-President Kamala Harris said on Friday that she had always intended to visit the US-Mexico border, responding to criticism by Republicans that she should have travelled there earlier as part of her work to address the root causes of migration.

“It was always the plan to come here,” Harris told reporters shortly after landing in Texas. “And I think we’re going to have a good and productive day.”

From the first few minutes of her trip, Harris was politically miles away from a rare moment of placidity in Washington, where President Biden was celebrating what appeared to be a bipartisan deal on an expansive infrastructure package. Instead, Harris faced immediate questions about why she had selected El Paso over the lower Rio Grande Valley, which is considered the epicentre of the current surge in migration.

And she was criticised for not visiting a tent complex at nearby Fort Bliss, where migrant children are being held.

“She’ll check off the box of going down to the border,” said Representative Henry Cuellar, a Texas Democrat who wrote a letter to Harris last week urging her to visit. Cuellar was sceptical that Harris’s visit would give her a full understanding of the scope of the problem.

“The folks down there don’t need a pat on the back,” said Cuellar, who added that his letter went unanswered.

Other Democrats said Harris’s trip would be productive. Representative Veronica Escobar, a Democrat whose district includes El Paso and who travelled to Texas with Harris, said in an interview on Thursday that the trip will give the Vice-President an idea of what happens when officials don’t address the root causes of migration.

“We’ve neglected to do that, and what has happened as a result is chaos and really poor management of people at our nation’s front door,” she said.

Along with Escobar, Harris travelled with Senator Dick Durbin, the chairman of the Senate Judiciary Committee who has been involved in past attempts at bipartisan immigration reform, and Alejandro N. Mayorkas, the secretary of homeland security.

On the agenda for Friday was a visit to the US customs and Border Protection’s El Paso Processing Centre, where she will receive a briefing from officials on the “administration’s efforts to combat transnational crime”, Symone D. Sanders, the Vice- President’s press secretary, said on Thursday evening.

The Vice-President will also meet migrants who are being held at the centre, as well as with immigration advocates, Sanders said. The trip came together quickly after Harris was criticised in Mexico City and Guatemala, where she was grilled her about why she had not visited the border.