John le Carré, who elevated the spy novel to high art, dies at 89

In his books, MI6 was the ‘Circus,’ agents were ‘joes,’ operations involving seduction were ‘honeytraps’ and agents deeply embedded inside the enemy were ‘moles’ 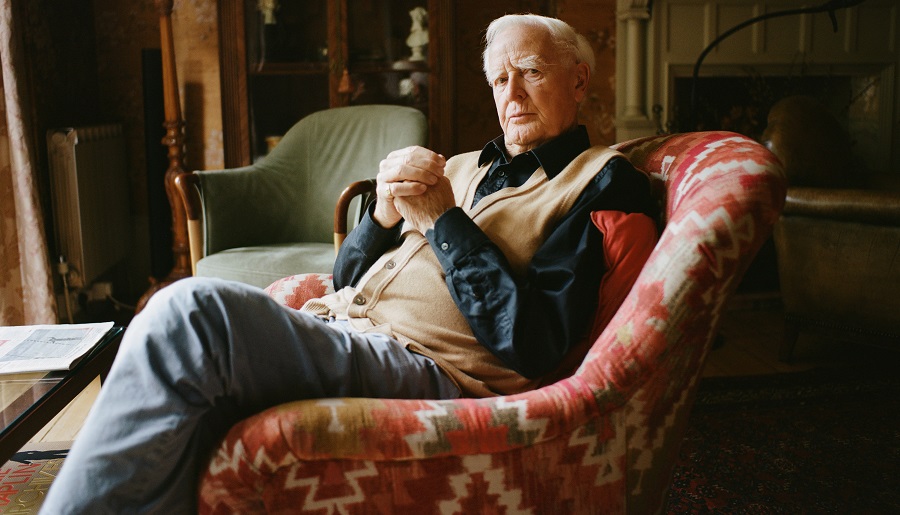 John le Carré, whose exquisitely nuanced, intricately plotted Cold War thrillers elevated the spy novel to high art by presenting both Western and Soviet spies as morally compromised cogs in a rotten system full of treachery, betrayal and personal tragedy, died on Saturday in Cornwall, England. He was 89.

The cause was pneumonia, his publisher, Penguin Random House, said on Sunday.

Before le Carré published his bestselling 1963 novel “The Spy Who Came in From the Cold,” which Graham Greene called “the best spy story I have ever read,” the fictional model for the modern British spy was Ian Fleming’s James Bond — suave, urbane, devoted to queen and country. With his impeccable talent for getting out of trouble while getting women into bed, Bond fed the myth of spying as a glamorous, exciting romp.

Le Carré upended that notion with books that portrayed British intelligence operations as cesspools of ambiguity in which right and wrong are too close to call and in which it is rarely obvious whether the ends, even if the ends are clear, justify the means.

Led by his greatest creation, the plump, ill-dressed, unhappy, brilliant, relentless George Smiley, le Carré’s spies are lonely, disillusioned men whose work is driven by budget troubles, bureaucratic power plays and the opaque machinations of politicians — men who are as likely to be betrayed by colleagues and lovers as by the enemy.

Smiley has a counterpart in the Russian master spy Karla, his opposite in ideology but equal in almost all else, an opponent he studies as intimately as a lover studies his beloved. The end of “Smiley’s People,” the last in a series known as the Karla Trilogy, brings them together in a stunning denouement that is as much about human frailty and the deep loss that comes with winning as it is about anything.

“Thematically, le Carré’s true subject is not spying,” Timothy Garton Ash wrote in The New Yorker in 1999. “It is the endlessly deceptive maze of human relations: the betrayal that is a kind of love, the lie that is a sort of truth, good men serving bad causes and bad men serving good.”

Some critics took le Carré’s message to be that the two systems, East and West, were moral equivalents, both equally bad. But he did not believe that. “There is a big difference in working for the West and working for a totalitarian state,” he told an interviewer, referring to his own work as a spy in the 1950s and early ’60s.

Le Carré refused to allow his books to be entered for literary prizes. But many critics considered his books literature of the first rank.

“I think he has easily burst out of being a genre writer and will be remembered as perhaps the most significant novelist of the second half of the 20th century in Britain,” the author Ian McEwan told the British newspaper The Telegraph in 2013, adding that he has “charted our decline and recorded the nature of our bureaucracies like no one else has.”

Le Carré’s own youthful experience as a British agent, along with his thorough field research as a writer, gave his novels the stamp of authority. But he used reality as a starting-off point to create an indelible fictional world.

In his books, the Secret Intelligence Service, otherwise known as MI6, was the “Circus,” agents were “joes,” operations involving seduction were “honeytraps” and agents deeply embedded inside the enemy were “moles,” a word he is credited with bringing into wide use if not inventing it. Such expressions were taken up by real British spies to describe their work, much as the Mafia absorbed the language of “The Godfather” into their mythology.

“As much as in Tolkien, Wodehouse, Chandler or even Jane Austen, this closed world is a whole world,” the critic Boyd Tonkin wrote in The Independent. “Via the British ‘Circus’ and its Soviet counterpart, Le Carré created a laboratory of human nature; a test-track where the innate fractures of the heart and mind could be driven to destruction.”

John le Carré knew deception intimately because he was born into it. (For one thing, “John le Carré” was not his real name.) Born David John Moore Cornwell in Poole, Dorset, on Oct. 19, 1931, he had a ragged, destabilizing childhood dominated by his father, Ronald, an amoral, flamboyant, silver-tongued con man who palled around with celebrities and crooks, left trails of unpaid bills wherever he went, and was forever on the verge of carrying out a huge scam or going to jail. (He was in and out of prison for fraud.)

The family lurched between extremes. “When father was flush, the chauffeur-driven Bentley would be parked outside,” he said. “When things were a bit iffy, it was parked in the back garden, and when we were down and out, it disappeared altogether.” Often, debts would be called in.

“You have no idea how humiliating it was, as a boy, to suddenly have all your clothes, your toys, snatched by the bailiff,” le Carré told an interviewer.

The boys’ mother, Olive (Glassey) Cornwell, walked out of the family house and into the arms of another man when David was 5. He has little memory of it — his father intimated that she was ill, then that she had died — and he did not see her again for 16 years.

As crooked as he was, Ronnie Cornwell craved establishment respectability for his children, and David was sent to prep school and then to Sherborne, a boarding school, which he hated so much, he decamped for Switzerland at age 16 and enrolled at the University of Bern to study modern languages.

There he was recruited by a British spy working undercover at the embassy, and so his life of spying began. Except for two years when he taught at Eton, England’s premier secondary school, le Carré was a spy of some kind for 16 years, for both MI6 and its domestic counterpart, MI5.

It was not until years later that he owned up to his earlier profession — it was a relief, he said, not to have to lie about it any more — and he was always vague on the details. But while a student at Oxford, where he went after Bern, le Carré kept an eye out for possible Soviet sympathizers in left-wing groups. In 1960, he moved to Germany, posing as a British diplomat; his work included conducting interrogations, tapping phones, organizing break-ins and running agents.

Briefly, he led a triple life: diplomat, spy, novelist, writing his first book, “Call for the Dead” (1961), in longhand in red notebooks. The story of the unveiling of an East German spy operation, it was notable mostly for the introduction of Smiley and his faithless wife, Ann. (Ann was the name of le Carré’s wife at the time, though when they divorced, in 1971, it seems to have been his infidelity that was a problem, not hers).

Forbidden by his employers to write under his own name, the author fixed on “John le Carré.” Over the years he gave various explanations for it, finally admitting that he could not remember which, if any, were true.

“The Spy Who Came in From the Cold,” the author’s third novel, was published to instant acclaim and worldwide bestsellerdom. It was a shock of a book. Its hero, Alec Leamas, is a worn-out spy sent down a rabbit hole of deception, betrayal and personal tragedy in a mission that he thinks is one thing but that is really another. To readers used to tidy fantasy endings, the book’s conclusion is like a blow to the head.

“In its way, it marked a boundary between two eras: the era of God-is-in-our side patriotism, of trust in government and in the morality of the West, and the era of paranoia, of conspiracy theory and suspicion of government, of moral drift,” Stephen Schiff wrote in Vanity Fair. As many of le Carré’s books would be, “The Spy Who Came in From the Cold” was made into a movie; Richard Burton starred as Leamas.

The success of the novel — and the fact that a British paper revealed its author’s true identity — allowed le Carré in 1964 to quit his undercover work to write full-time. He produced book after book set against the Cold War backdrop, including “The Looking Glass War” (1965); “A Small Town in Germany” (1968); the Karla Trilogy, and “The Russia House” (1989).

In addition to the Cold War books, his most celebrated novels include “The Little Drummer Girl” (1983), about an undercover operation by a passionate young actress-turned spy; the book performs the seemingly impossible trick of evoking genuine sympathy for both the Israeli and Palestinian points of view. ‘“The Little Drummer Girl’ is about spies,” William F. Buckley Jr. wrote in The New York Times, “as ‘Madame Bovary’ is about adultery or “Crime and Punishment’ about crime.”

“A Perfect Spy” (1986), le Carré’s most autobiographical work, tells the story of Magnus Pym, a double agent with a con man father modeled after le Carré’s own, and how the two deceive and are deceived by each other in an intricate skein of lies. Schiff called it “one of the most penetrating depictions in all literature of the links between love and betrayal.”

The author ultimately broke off contact with his father, who continued to hound him for money, styled himself “Ron le Carré” and once threatened to sue him. After Ronald died, le Carré paid for his funeral but did not go to it.

The women in le Carré’s early books were often caricatures — the ingénue, the adulteress, the sexless crone — and that was so, he once said, because “I grew up without them and they have always been strangers to me.”

But he made a conscious effort to address the lapse in later books. In “A Constant Gardener,” a diplomat, seeking the truth about his murdered wife in Africa and filled with remorse about how little he understood her, resolves to redeem himself by continuing her work and finding a way inside her, almost, by trying to see the world as she had seen it.

If le Carré painted his Cold War world in shades of gray, his post-9/11 books seemed increasingly black and white.

They had the familiar le Carré flourishes: multidimensional chess games of plots; biting characterizations; the sense of weak and sometimes decent individuals caught up in situations they barely understood; in-depth on-location research that he compared to “a perfectly normal espionage operation — it’s just good reporting.” But he became bitterly disillusioned with Britain and America after the 2003 invasion of Iraq and the war on terror.

He was particularly angry at reports of Western torture, something that did not happen when he was a spy, he said.

“Le Carré is still writing at something close to the top of his game,” Dwight Garner wrote in The New York Times Magazine, speaking of “A Delicate Truth” (2013), the author’s 23rd novel, which he called “an elegant yet embittered indictment of extraordinary rendition, American right-wing evangelical excess and the corporatization of warfare.”

His last novel, another spy thriller, titled “Agent Running in the Field,” was published in October 2019, prompting Robert McCrum of The Guardian to write, “Publishing such a thriller at the age of 88, a feat of imaginative stamina that surpasses the tenacity of his idol Graham Greene, le Carré confirms his place at the head of his profession.”

His first marriage, to Ann Sharp, ended in divorce in 1971.

He married Valerie Jane Eustace, a book editor, in 1972; she later served as keeper of the schedule and typist of the manuscripts and general provider of sound counsel for her husband. Their son, Nicholas, became a successful novelist, too, writing under the name Nick Harkaway.

They both survive him, as do his three sons from his first marriage, Simon, Stephen and Timothy; 14 grandchildren, and three great-grandchildren.