Truce efforts by Egypt, Qatar and the UN made no progress to end violence that flared this week after tension during Ramazan and clashes in East Jerusalem 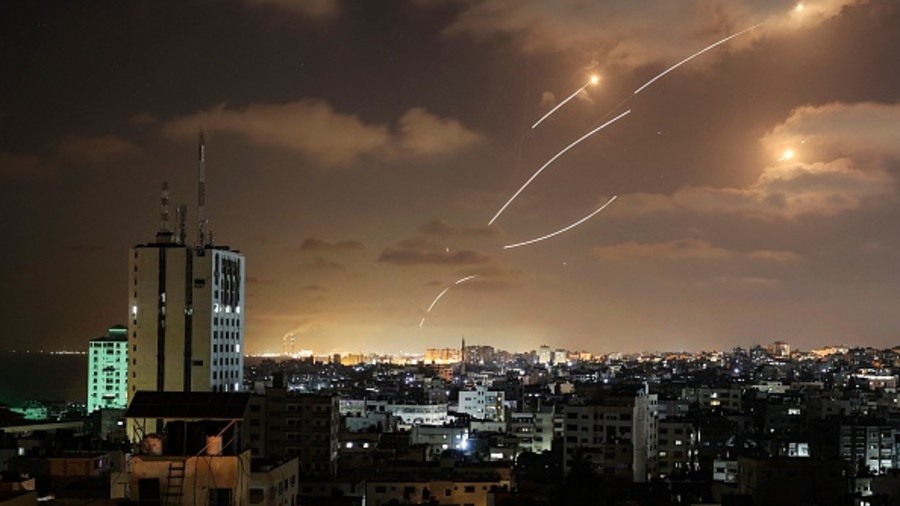 Rockets launched from the Gaza Strip, controlled by the Palestinian Hamas movement, are intercepted by Israel's Iron Dome aerial defence system on May 12, 2021
Getty Images
Reuters   |   Jerusalem   |   Published 13.05.21, 02:28 AM

Israel said it killed 16 members of the Hamas military wing in an air strike on Gaza on Wednesday and Palestinian militants rained rockets into Israel as global concern mounted over their most intense hostilities in years.

Israel’s Shin Bet security service said the brigade commander for Gaza City was among senior members of the Islamist militant group Hamas who had been killed.

“This is just the beginning. We’ll hit them like they’ve never dreamed possible,” Prime Minister Benjamin Netanyahu said in a statement.

Soon after the announcement, a new rocket barrage was fired at the Israeli city of Ashdod and Israeli media said the military was preparing for new salvoes on the Tel Aviv area. Hamas confirmed the commander’s death and the loss of “other leaders and warriors” and said in a statement: “Thousands of leaders and soldiers will follow in their footsteps.”.

A Palestinian source said truce efforts by Egypt, Qatar and the UN had made no progress to end violence that flared this week after tension during Ramazan and clashes in East Jerusalem.

The offensive is the heaviest between Israel and Hamas since a 2014 war in the Hamas-ruled enclave, and concern is growing that the situation could spiral out of control.

In Gaza, a multi-storey residential building collapsed after Israel warned its occupants in advance to evacuate, and another was heavily damaged in the air strikes.

Other air strikes hit what Israel’s military said were rocket launch sites, Hamas offices and the homes of Hamas leaders. Israeli officials said at least 41 Palestinian fighters have been killed in the Gaza hostilities so far. “Israel has gone crazy,” said a man on a Gaza street, where people ran out of their homes as explosions rocked buildings.

Sixteen people were killed in Israeli air strikes on Gaza on Wednesday, Gaza’s health ministry said. Witnesses and health officials in Gaza said one Israeli air strike killed three people, including a woman, in a car.

“The children have escaped the coronavirus, and now a new trauma,” an Israeli woman in the coastal city of Ashkelon told Channel 11 TV.

Israelis ran to shelters or lay flat on pavements in some communities far from Gaza.

“All of Israel is under attack. It's a very scary situation to be in,” said Margo Aronovic, a 26-year-old student, in Tel Aviv.

Along the Gaza border, an Israeli soldier was killed by an anti-tank missile, the military said. Two people were killed by a rocket in Lod, near Tel Aviv.

Tension also spilled over in mixed Arab-Jewish towns in Israel where there have been demonstrations over the hostilities.

On video call, wife killed by rocket in Israel