Israel-Palestine conflict: India calls for restraint from all parties 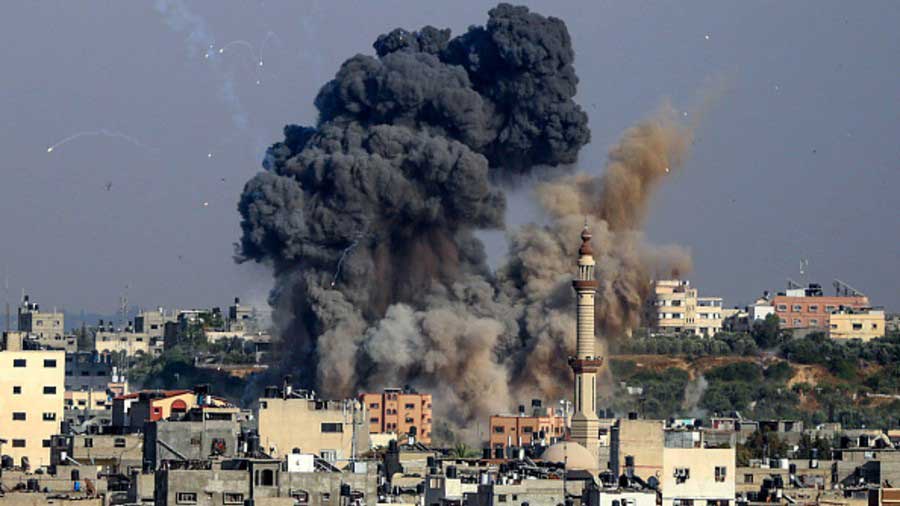 Voicing concern over the recent escalation in the Gaza Strip, India on Monday called on all parties to the conflict to refrain from acts that could exacerbate tensions and worsen the security situation in the region.

Speaking at the UN Security Council meeting on the Middle East Peace Process, including the Palestine Question, Foreign Secretary Harsh Vardhan Shringla also expressed hope for early commencement of high-level negotiations between Israel and Palestine that "provide the best opportunity" to resolve all final status issues and achieve a two-State solution.

"We are concerned by the recent escalation in the Gaza Strip, which once again underscores the fragility of the ceasefire and the urgent need for addressing the underlying causes that have triggered the escalation," said Mr Shringla, who chaired the UNSC meeting as President of the Security Council for the month of August.

Addressing the Council in his national capacity, Mr Shringla said that India calls on "all parties to the conflict to respect the ceasefire and refrain from acts that could exacerbate tensions and worsen the security situation. We recognise the efforts made by the UN and regional countries to prevent the hostilities from escalating into another military conflict."

Mr Shringla stressed that "high-level interaction" between Israel and Palestine contributes to a better environment for the resumption of direct peace negotiations.

"We hope to see early commencement of these negotiations between the two sides, as they provide the best opportunity to resolve all final status issues and achieve a two-State solution. The international community, the Middle East Quartet in particular, has an important role to play in reviving these negotiations," he said.

"The West Bank continues to witness incidents of violence and clashes between the Palestinians and Israeli security forces. Both sides must desist from provocative actions in the interest of peace and stability," Mr Shringla said.

"We note the progress in the legal challenge to the eviction of Palestinian families in Sheikh Jarrah and underscore the need for respecting the historic status quo in East Jerusalem and its neighbourhoods. We also urge parties to refrain from unilateral actions that undermine the viability of the two-State solution," he added.

He underlined that "given our long-standing and firm commitment to the establishment of a sovereign, independent and viable State of Palestine, within secure, recognised and mutually agreed borders, living side by side with Israel in peace and security, India will remain fully supportive of all efforts to restart the peace process."

His remarks comes a day after Israel's Defence Minister Benny Gantz held talks with Palestinian President Mahmoud Abbas in the West Bank on Sunday, the first high-level meeting between the two sides in years.

In his speech, Shringla noted that the decision by Israel to increase the number of work permits issued to Palestinians will help strengthen both the Palestinian and Israeli economies.

"Further, the recognition of Covid-vaccination certificates issued by the Palestinian Authority and the facilitation of passage of patients from the Gaza Strip to the West Bank are also positive signals," he said.

He reaffirmed India's call for regular and predictable transfer of aid and other essential items to Gaza to ease the humanitarian situation and facilitate early reconstruction, as well as for appropriate use of such aid.

"It is also important that the international donor community supports the reconstruction of the Gaza Strip through the Palestinian Authority," he said, adding that India takes note of the incremental relaxation of restrictions for entry of commodities into the Gaza Strip and urges the parties to work together to ensure timely access to such relief for the Palestinians.

"This would create conditions which will help in preventing another round of escalation," said Mr Shringla, who is in New York to Chair the UNSC meetings as India's Presidency of the 15-nation Council ends August 31.

He termed as "an important development" the recent agreement for resumption of cash assistance to needy Palestinian families in the Gaza Strip that would provide much needed relief for these families.

He also voiced appreciation for the work of agencies like UN Office for the Coordination of Humanitarian Affairs (OCHA), UN Relief and Works Agency for Palestine Refugees in the Near East (UNRWA) and World Food Programme (WFP) to ensure delivery of critical aid to the Palestinians in the Gaza Strip.

India welcomed all measures which create greater opportunities for the socio-economic development of the Palestinian people.

Mr Shringla told the Council that India's development cooperation with Palestine is also geared towards this objective and the country has helped in building schools, setting up ICT and vocational training centres, a technology park and a national printing press; and is also supporting several other quick-impact community projects in Palestine.