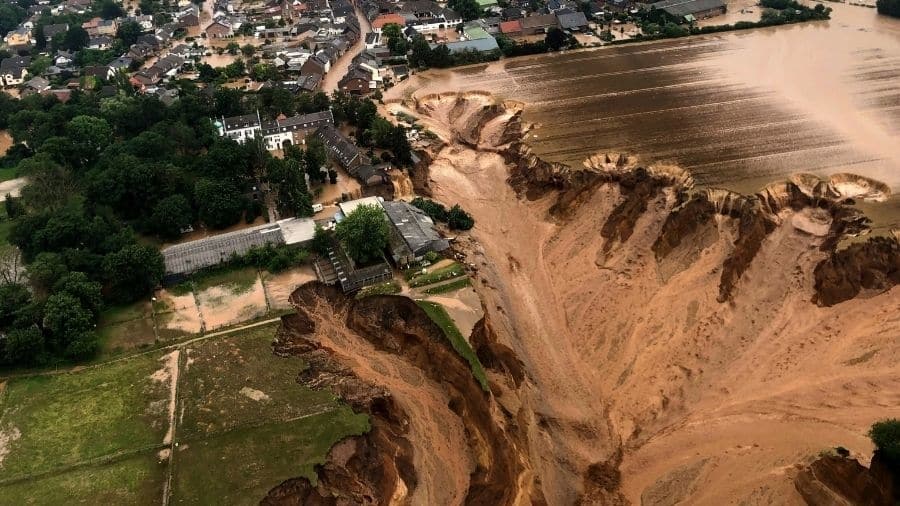 Rescue workers searched flood-ravaged parts of Germany and Belgium for survivors on Saturday after burst rivers and flash floods this week collapsed houses and claimed at least 157 lives.

Some 133 people have died in the flooding in western Germany, in the country's worst natural disaster in more than half a century. That included about 90 in the Ahrweiler district south of Cologne, according to police. Hundreds of people are still missing.

Around 700 residents were evacuated late on Friday after a dam broke in the town of Wassenberg near Cologne, authorities said.

"Water levels have been stabilising since last night, one can say the situation is stable," Wassenberg mayor Marcel Maurer said. "It's too early to give the all-clear but we are cautiously optimistic."

In Belgium, the death toll rose to 24, according to the national crisis centre, which is coordinating the rescue effort.

"Unfortunately, we have to assume that this figure will continue to rise in the coming hours and days," the centre said in a statement. About 20 people are still missing.

Over the past several days the floods, which have mostly hit the German states of Rhineland Palatinate and North Rhine-Westphalia and eastern Belgium, have cut off entire communities from power and communications.

In the southern Belgian provinces of Luxembourg and Namur, authorities rushed to supply drinking water to households without a clean supply.

Water levels slowly fell in the worst hit parts of Belgium, though the crisis centre said the situation could worsen in the afternoon along the Demer river closer to Brussels, with about 10 houses under threat of destruction.

Belgian rail network operator Infrabel published plans of repairs to lines, some of which would be back in service only at the very end of August.

Emergency services in the Netherlands also remained on high alert as overflowing rivers threatened towns and villages throughout the southern province of Limburg.

Tens of thousands of residents in the region have been evacuated in the past two days, while soldiers, fire brigades and volunteers worked frantically throughout Friday night to enforce dykes and prevent flooding.

The Dutch have so far escaped disaster on the scale of its neighbours, and as of Saturday morning, no casualties had been reported.

Laschet is ruling CDU party's candidate in September's general election. The devastation of the floods could intensify the debate over climate change ahead of the vote.

Scientists have long said that climate change will lead to heavier downpours. But determining its role in these relentless downpours will take at least several weeks to research, scientists said on Friday.