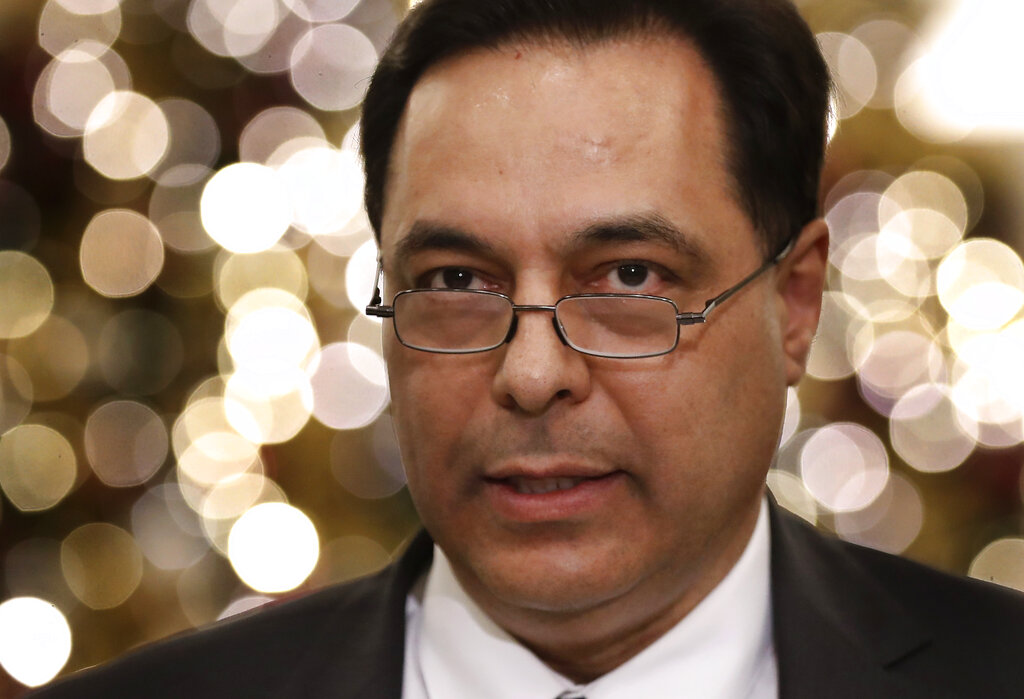 But prime minister-designate Hassan Diab's efforts to form a government will almost certainly hit snags in a deeply divided country facing its worst economic and financial crisis since the 1975-90 civil war. Protesters rejected him as part of the old ruling class and continued to demonstrate.

Analysts said Diab is backed by one political group in parliament and failed to secure a consensus, including from his Sunni community at exceptionally difficult times. According to the country's sectarian-based system, the premier has to come from Sunni community.

In his first public address, Diab said he would work quickly to form a government in consultations with political parties and representatives of the protest movement.

He said he is committed to a reform plan and described the current situation as “critical and sensitive” requiring exceptional efforts and collaboration.

“We are facing a national crisis that doesn't allow for the luxury of personal and political battles but needs national unity,” Diab said. He told the protesters he hears their “pain.'

President Michel Aoun named Diab prime minister after a day of consultations with lawmakers in which he gained a simple majority of the 128-member parliament. Sixty-nine lawmakers, including the parliamentary bloc of the Shiite Hezbollah and Amal movements, as well as lawmakers affiliated with Aoun, gave him their votes.

Diab, a 60-year-old professor at American University of Beirut, faces the daunting task of forming a government to tackle the crippling financial crisis in one of the most indebted countries of the world.

Although gaining the majority of votes, Diab failed to get the support of the country's major Sunni leaders, including former Prime Minister Saad Hariri. That makes it difficult for him to form an inclusive Cabinet able to gain the international community's trust and unlock badly needed assistance for the tiny Mediterranean country. Friendly nations, including France, have made clear they will not support Lebanon before a reform-minded Cabinet is formed.

U.S. Undersecretary of State for Political Affairs David Hale was expected to arrive Thursday in Beirut, the most senior foreign diplomat to visit the country since the crisis. U.S. diplomats have said they support the quick formation of a government that can effectuate reform.

Support from Iran-backed Hezbollah guarantees Diab a thorny path, potentially inviting push-back from Western and Gulf nations that had supported the outgoing Hariri. The Shiite group is designated a terrorist organization by the U.S., some Gulf Arab countries and a few Latin American nations. The European Union considers only Hezbollah’s military wing to be a terrorist group.

Maha Yahya, director of Carnegie Middle East, a Beirut-based think tank, said Diab arrives with no support from his community and no consensus at a time when Lebanon is facing an economic meltdown and needs international support.

'The problem is he is coming on as a weakened prime minister, ' she said.

Following Diab's appointment, protesters began gathering in central Beirut's Martyrs' Square, the epicenter of the protests. They rejected Diab's appointment and cast him as part of the old class of politicians they are revolting against. Supporters of Hariri also began taking to the streets.

“I see the country is going to waste. With this kind of government, no one will deal with it, no Arab, no Europe and No U.S.,” said Saeb Hujrat, a protester in Martyr Square. Hujrat held a large circular banner reading: “We want a government outside of the ruling class.'

The leaderless protests have for two months been calling for a government made up of specialists that can work on dealing with the economic crisis. The protests have in recent days taken a violent turn, with frequent clashes between security forces and protesters. Supporters of Hezbollah and Amal have also attacked the protest camp site in Beirut on several occasions. The most recent came over the weekend when they set fire to cars and pelted security forces with stones and firecrackers for hours.

Diab, who served as education minister in 2011, gained attention after caretaker premier Hariri withdrew his name from consideration following weeks of haggling and deep divisions between the various factions over naming him again. Hariri resigned Oct. 29 in response to the unprecedented mass protests and as an already dire economic crisis quickly deteriorated.

Hariri had insisted he would head a Cabinet made up of specialists to deal with the economic and financial crisis. The Iran-backed Hezbollah, which initially backed him, demanded a government that includes all major political factions.

Diab served as minister of education from 2011-2014 when Hezbollah and its allies overturned a former Cabinet headed by Hariri at the time.

Diab was in the United Kingdom when Lebanon's civil war broke out. There, he received undergraduate and graduate degrees in Communications and Computer Engineering from the universities of Leeds Metropolitan, Surrey and Bath.