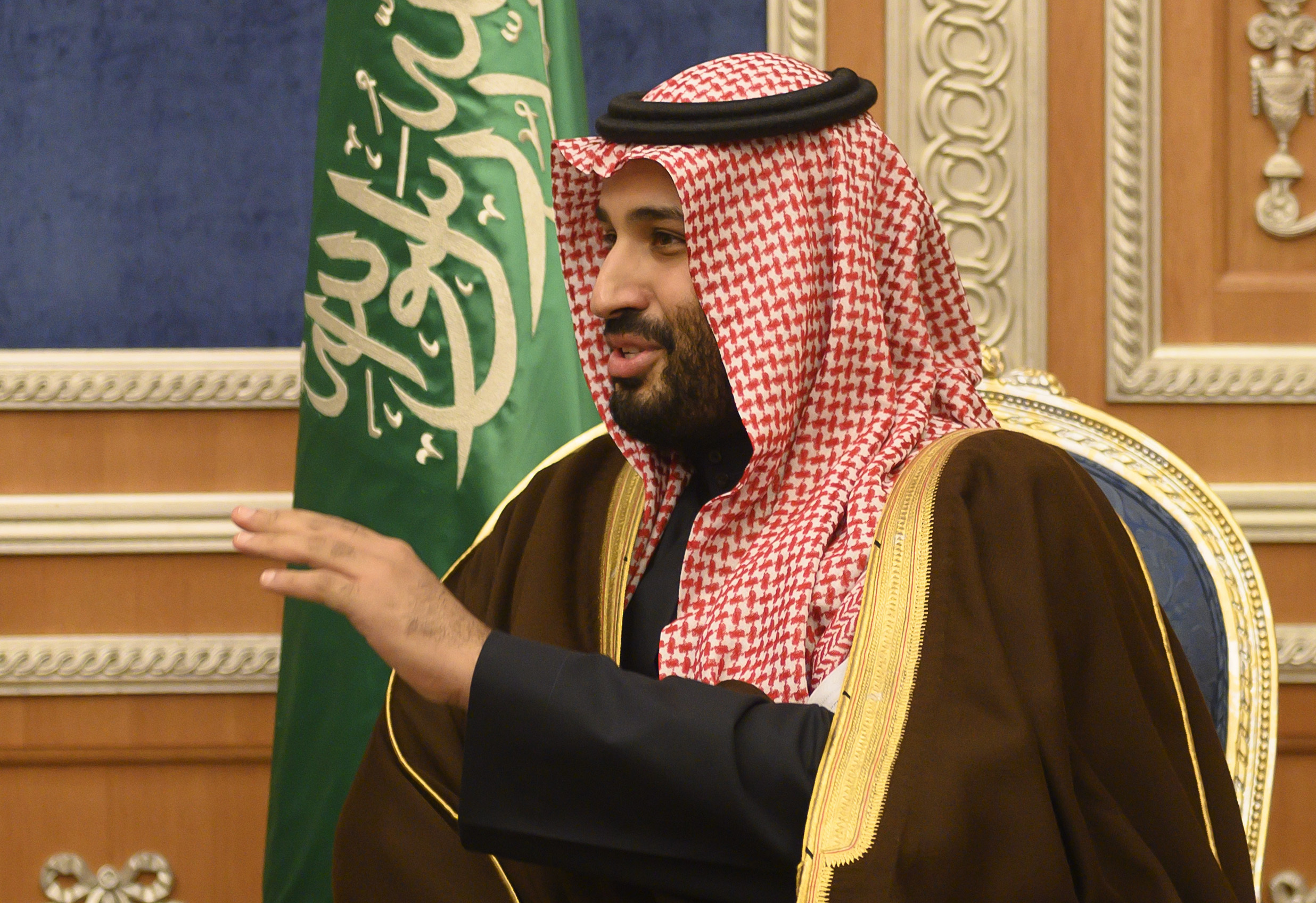 Saudi Crown Prince Mohammed bin Salman at a meeting with US secretary of state Mike Pompeo in Riyadh on January 14. Congress has grown increasingly critical of Saudi Arabia since the assassination of Jamal Khashoggi in Istanbul, allegedly carried out by members of Prince Mohammed's entourage.
AP
AP   |   Dubai   |   Published 26.01.19, 08:23 AM

A military base deep inside Saudi Arabia appears to be testing and possibly manufacturing ballistic missiles, experts and satellite images suggest, evidence of the type of weapons programme it has long criticised its archrival Iran for possessing.

Further raising the stakes for any such programme are comments by Saudi Arabia's powerful crown prince Mohammed bin Salman, who said last year the kingdom wouldn't hesitate to develop nuclear weapons if Iran does. Ballistic missiles can carry nuclear warheads to targets thousands of kilometres (miles) away.

Officials in Riyadh and the Saudi embassy in Washington did not respond to requests for comment.

Having such a programme could further strain relations with the US, the kingdom's long-time security partner, at a time when ties already are being tested by the killing of Washington Post columnist Jamal Khashoggi and the Saudi-led war in Yemen.

Jeffrey Lewis, a missile expert at the Middlebury Institute of International Studies in Monterey, California, said heavy investment in missiles often correlates with an interest in nuclear weapons. 'I would be a little worried that we're underestimating the Saudis' ambitions here,' said Lewis, who has studied the satellite images.

The images, first reported by The Washington Post, focus on a military base near the town of al-Dawadmi, some 230 km west of Riyadh, the Saudi capital. Jane's Defence Weekly first identified the base in 2013, suggesting its two launch pads appear oriented to target Israel and Iran with ballistic missiles the kingdom previously bought from China.

In this November 13, 2018 satellite image from Planet Labs Inc that has been annotated by experts at the Middlebury Institute of International Studies, a suspected Saudi ballistic missile base and test facility is seen outside of the town of al-Dawadmi, Saudi Arabia.
Planet Labs Inc, Middlebury Institute of International Studies via AP

The November satellite images show what appear to be structures big enough to build and fuel ballistic missiles. An apparent rocket-engine test stand can be seen in a corner of the base — the type on which a rocket is positioned on its side and test-fired in place. Such testing is key for countries attempting to manufacture working missiles, experts say.

Michael Elleman, the senior fellow for missile defence at the International Institute for Strategic Studies in Washington, also reviewed the satellite photos and said they appear to show a ballistic missile programme.

The question remains where Saudi Arabia gained the technical know-how to build such a facility. Lewis said the Saudi stand closely resembles a design used by China, though it is smaller.

Chinese military support to the kingdom would not come as a surprise. The Chinese have increasingly sold armed drones to Saudi Arabia and other Mideast nations, even as the US blocks sales of its own to allies over proliferation concerns. Beijing also sold Riyadh variants of its Dongfeng ballistic missiles, the only ones the kingdom was previously believed to have in its arsenal.

Asked by The Associated Press on Friday about the base, China's defence ministry declined immediately to comment.

'I have never heard of such a thing as China helping Saudi Arabia to build a missile base,' Chinese foreign ministry spokeswoman Hua Chunying said.

Neither Saudi Arabia nor China are members of the Missile Technology Control Regime, a 30-year-old agreement aimed at limiting the proliferation of rockets capable of carrying weapons of mass destruction, such as nuclear bombs.

Saudi Arabia, along with Israel and the US, have long criticised Iran's ballistic missile programme, viewing it as a regional threat.

Iran, whose nuclear programme for now remains limited by its 2015 deal with world powers, insists its atomic programme is peaceful. But Western powers have long feared it was pursuing nuclear weapons in the guise of a civilian program, allegations denied by Tehran.

Iran has relied on its ballistic missiles as its own air force is largely made up of pre-1979 fighter jets. Saudi Arabia, on the other hand, has a fleet of modern F-15s, Typhoons and Tornadoes — which raises the question of why the Saudis would choose to develop the missiles.

Elleman, the defence expert, said that while Saudi pilots are skilled, the kingdom still needs American help with logistics.

'Today, they rely heavily on direct American support. There is no absolute guarantee that US forces and supporting functions will aid a Saudi attack on Iranian targets,' Elleman told AP. 'Ballistic missiles are a reasonable hedge against those concerns.'

Saudi Arabia, meanwhile, has been targeted by ballistic missiles fired from neighbouring Yemen by the Houthi rebels, some of which have reached Riyadh. Researchers, Western nations and UN experts say Iran supplied those missiles to the rebels, something Tehran and the rebels deny.

Saudi Arabia is pursuing its own nuclear programme, and Prince Mohammed, the 33-year-old son of King Salman who is next in line for the throne, said it would race for an atomic weapon if Iran were to develop one.

'Saudi Arabia does not want to acquire any nuclear bomb, but without a doubt if Iran developed a nuclear bomb, we will follow suit as soon as possible,' Prince Mohammed told CBS 60 Minutes in an interview aired last March.

A Saudi programme would only complicate efforts by the US and its Western allies to limit Iran's ballistic missile programme, said STRATFOR, the Austin, Texas-based private intelligence firm.

STRATFOR said that 'should Saudi Arabia move into a test-launch phase, the United States will be pressured to take action with sanctions,' as it has done with Iran.

Congress has grown increasingly critical of Saudi Arabia since the Oct. 2 assassination of Khashoggi at the Saudi Consulate in Istanbul, allegedly carried out by members of Prince Mohammed's entourage.