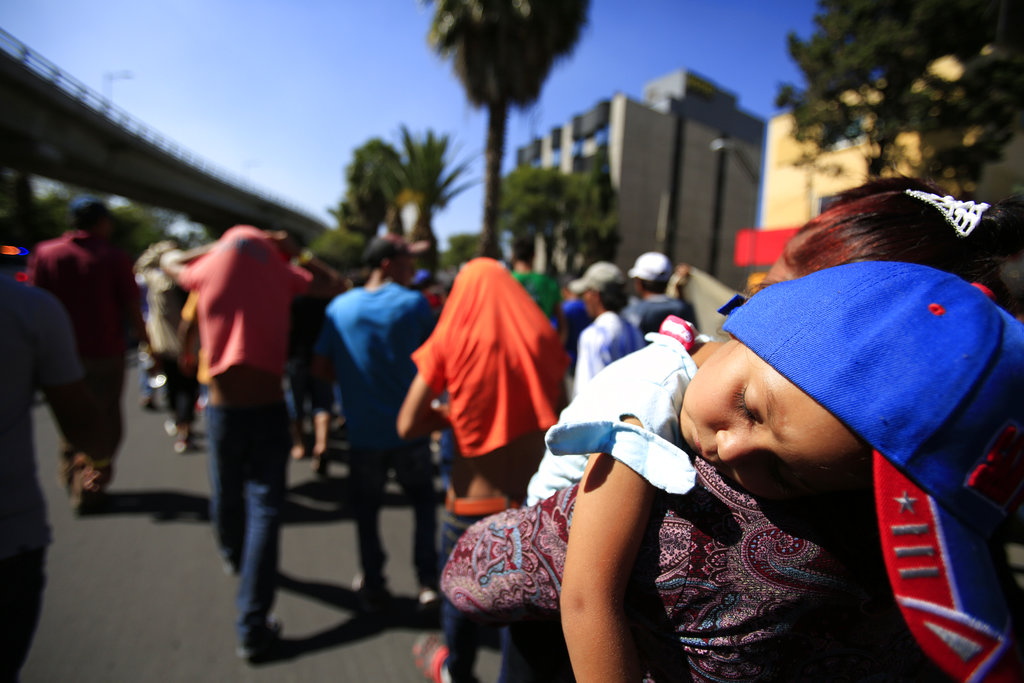 A sleeping Honduran girl is carried as Central American migrants march to the office of the United Nations' humans rights body in Mexico City.
AP
AP   |   Washington   |   Published 10.11.18, 06:57 AM

President Donald Trump has issued a proclamation to deny asylum to migrants who enter the country illegally, tightening the border as caravans of Central Americans slowly approach the US. The plan was immediately challenged in court.

Trump invoked the same powers he used last year to impose a travel ban that was upheld by the Supreme Court. The new regulations are intended to circumvent laws stating that anyone is eligible for asylum no matter how he or she enters the country. About 70,000 people per year who enter the country illegally claim asylum, officials said.

“We need people in our country, but they have to come in legally,” Trump said on Friday as he departed for Paris.

The American Civil Liberties Union and other legal groups swiftly sued in federal court in Northern California to block the regulations, arguing the measures were illegal.

'We are not killers,’ migrant caravan tells Donald Trump

“The President is simply trying to run roughshod over Congress’s decision to provide asylum to those in danger regardless of the manner of one’s entry,” said ACLU attorney Lee Gelernt.

The litigation also seeks to put the new rules on hold while the case progresses.

The regulations go into effect on Saturday. They would be in place for at least three months but could be extended, and don’t affect people already in the country.

The Justice Department said in a statement the regulations were lawful

Trump’s announcement was the latest push to enforce a hard-line stance on immigration through regulatory changes and presidential orders, bypassing Congress, which has not passed any immigration law reform. But those efforts have been largely thwarted by legal challenges and, in the case of family separations this year, stymied by a global outcry that prompted Trump to retreat.