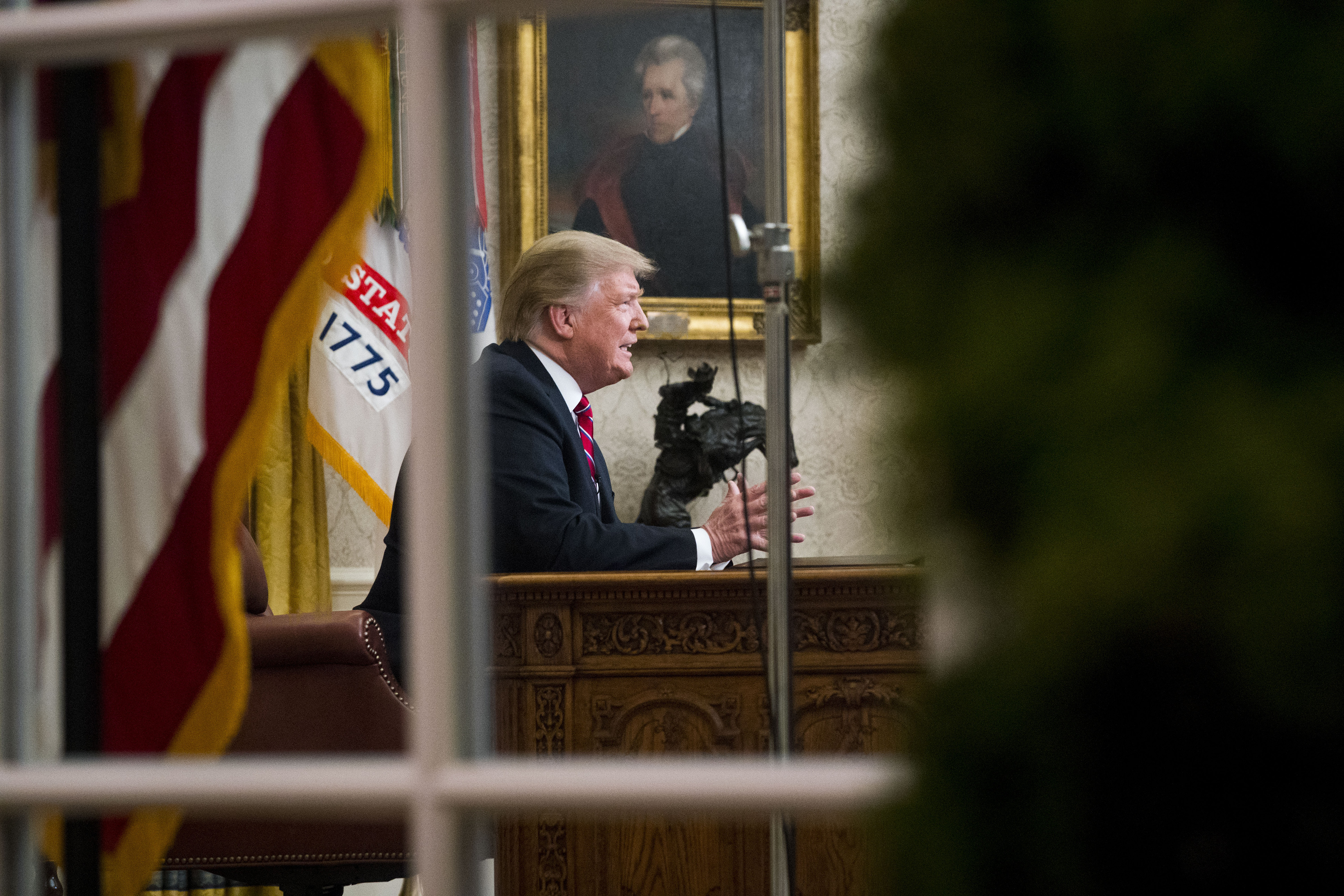 Donald Trump addresses the nation about border security, on the 18th day of the government shutdown, from the Oval Office of the White House in Washington on Tuesday.
The New York Times
Peter Baker/NYTNS   |   Washington   |   Published 09.01.19, 09:40 AM

President Donald Trump doubled down on one of the biggest gambles of his presidency on Tuesday night with a televised appeal to pressure Congress into paying for his long-promised border wall even at the cost of leaving the government partially closed until lawmakers give in.

Embarking on a strategy he himself privately disparaged as unlikely to work, Trump devoted the first prime-time Oval Office address of his presidency to his proposed barrier in hopes of enlisting public support in an ideological and political conflict that has shut the doors of many federal agencies for 18 days.

In a nine-minute speech that made no new arguments but included multiple misleading assertions, the President sought to recast the situation at the Mexican border as a “humanitarian crisis” and opted against declaring a national emergency to bypass Congress, which he had threatened to do, at least for now. But he excoriated Democrats for blocking the wall, accusing them of hypocrisy and exposing the country to criminal immigrants.

“How much more American blood must we shed before Congress does its job?” the President asked, citing a litany of grisly crimes said to have been committed by illegal immigrants. Asking Americans to call their lawmakers, he added: “This is a choice between right and wrong, justice and injustice. This is about whether we fulfill our sacred duty to the American citizens we serve.”

Democrats dismissed his talk of crisis as overstated cynicism and, with polls showing Trump bearing more of the blame since the partial shutdown began last month, betrayed no signs of giving in. The White House earlier in the day despatched Vice-President Mike Pence and others to Capitol Hill to try to shore up Senate Republicans, who are growing increasingly anxious as the standoff drags on.


President Trump must stop holding the American people hostage, must stop manufacturing a crisis and must reopen the government.
- Nancy Pelosi


In their own televised response on Tuesday night, House Speaker Nancy Pelosi of California and Sen. Chuck Schumer of New York, the Senate Democratic leader, accused the President of stoking fear and mocked him for asking taxpayers to foot the bill for a wall he had long said Mexico would pay for.

“President Trump must stop holding the American people hostage, must stop manufacturing a crisis and must reopen the government,” Pelosi said.

Trump plans to head to the Capitol on Wednesday to attend a Senate Republican lunch and later will host congressional leaders from both parties to resume negotiations that so far have made little progress. Trump has insisted on $5.7 billion for the wall while Pelosi said she would not give him a dollar for a wall she has called “immoral”.

In a nod to Democrats, Trump spent the first half of his talk on the humanitarian situation at the border before even mentioning the wall, expressing sympathy for those victimised by human smugglers. “This is a humanitarian crisis — a crisis of the heart and a crisis of the soul,” he said.

Even so, he directly took on Pelosi and Schumer. “The only thing that is immoral is the politicians to do nothing and continue to allow more innocent people to be so horribly victimised,” he said.

Trump has made the wall the singular focus of his presidency as he enters his third year in office. His promise to erect a “big, beautiful wall” along the border became perhaps the most memorable promise on the campaign trail this fall, eliciting chants from supporters of “build the wall,” and he has been frustrated by his inability to deliver on it.

But his alarming description of a “crisis” at the border has raised credibility questions. While experts agree there are serious problems to address, migrant border crossings have actually been declining for nearly two decades. The majority of heroin enters the United States through legal ports of entry, not through open areas of the border. And the State Department said in a recent report that there was “no credible evidence” that terrorist groups had sent operatives to enter the United States through Mexico.

At one point in his speech, he even suggested that Democrats had signaled that they would accept his wall if redesigned. “At the request of Democrats, it will be a steel barrier rather than a concrete wall,” he said, even though Democratic leaders have made clear they oppose the barrier regardless of the material.

Even so, Democrats, many of whom like Schumer voted in 2006 for 700 miles of fencing along the border, did not want to conduct the debate on Trump’s terms. Instead, they focused attention on the damaging effects of the shutdown, already the second longest in American history. About 800,000 government employees are either furloughed or working without pay, in addition to hundreds of thousands of contractors.

House Democrats planned to approve individual spending bills this week that were intended to reopen closed departments one at a time in hopes of putting Republicans on the defensive, but Sen. Mitch McConnell of Kentucky, the Senate Republican leader, has said he would not put any bill on the floor without Trump’s explicit support.

Senate Democrats took to the floor Tuesday to pressure McConnell and vowed to block consideration of other legislation until the government is reopened.

McConnell fired back, noting the 2006 legislation. “Maybe the Democratic Party was for secure borders before they were against them,” he said. “Or maybe they’re just making it up as they go along. Or maybe they are that dead-set on opposing this particular president on any issue, for any reason, just for the sake of opposing him.”

But two more Republicans, Sens. Lisa Murkowski of Alaska and Shelley Moore Capito of West Virginia, spoke out on Tuesday in favour of reopening the government while negotiations over border security continue. “I think we can walk and chew gum,” Murkowski told reporters.

Capito expressed frustration with the shutdown and “how useless it is,” indicating that she might support reopening the government while wall talks continue. “I mean, I think I could live with that, but let’s see what he says tonight,” she said before the speech.

That makes five Republican senators who have expressed such a position, which if combined with a unanimous Democratic caucus would make a majority to reopen the government if McConnell were to allow a vote.

Allies of the President warned fellow Republicans to stand with Trump. “If we undercut the President, that’s the end of his presidency and the end of our party,” Sen. Lindsey Graham, R-S.C., said on Fox News after the speech.

The political nature of the fight was hard to miss. Just hours before he went on air, Trump’s re-election campaign sent out a fundraising email asking supporters to raise $500,000 by the time his speech began. On the other side, Sen. Bernie Sanders, I-Vt., a possible candidate for the Democratic presidential nomination next year, offered his own response following Pelosi and Schumer.

For all of the pyrotechnics of competing national speeches, it seemed like a political Kabuki dance that by the end of the evening had changed no minds in Washington.

Rep. Hakeem Jeffries of New York, the No. 5 House Democrat, who perhaps most succinctly summed up his party’s response: “We are not paying a $5 billion ransom note for your medieval border wall,” he wrote on Twitter, with a castle emoji. “And nothing you just said will change that cold, hard reality.”