Trump called the second day of talks 'productive, Democrats said there was no progress 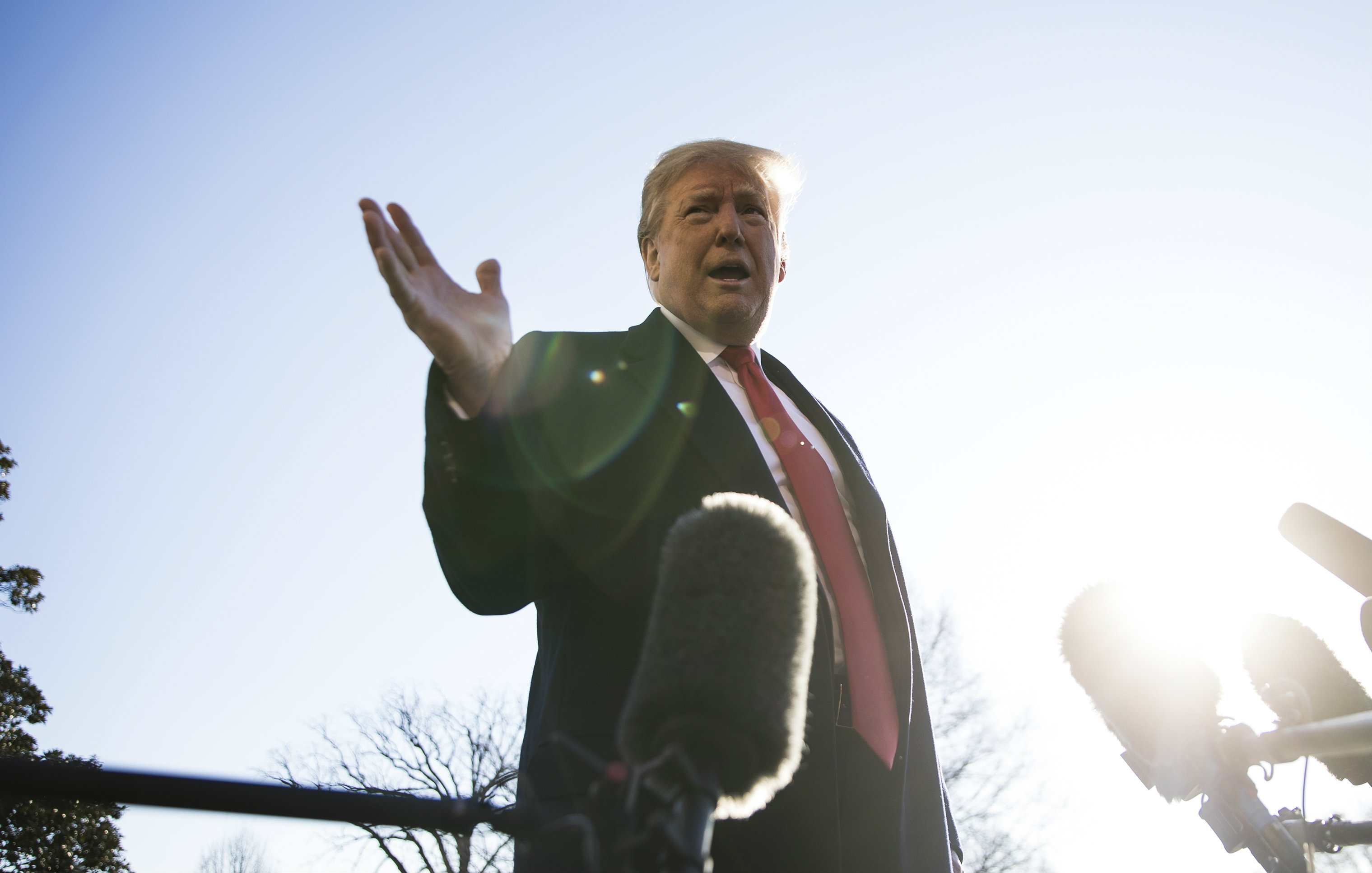 Donald Trump speaks to reporters on Sunday as he departs from the White House for Camp David, where he will meet with senior staff to discuss the shutdown and border security.
The New York Times
Michael Tackett And Catie Edmondson/NYTNS   |   Washington   |   Published 07.01.19, 10:33 AM

President Donald Trump’s evolving definition of a border wall animated negotiations to end a partial government shutdown on Sunday, while House Democrats moved to increase pressure on the President by vowing to pass individual bills to reopen targeted departments that handle critical functions like tax refunds and food stamps.

“I informed my folks to say that we’ll build a steel barrier,” Trump told reporters after returning to the White House from a senior staff meeting at Camp David, Maryland. He added of the Democrats, “They don’t like concrete, so we’ll give them steel.”

The President characterised the second day of talks between Vice-President Mike Pence and Democratic congressional aides as “productive” after saying earlier in the day that he did not anticipate much progress. But Trump also said that, if no deal could be reached over his demand for $5.7 billion for the border wall, he was still considering using “emergency” authority to build the barrier with other government funds.

V.P. Mike Pence and group had a productive meeting with the Schumer/Pelosi representatives today. Many details of Border Security were discussed. We are now planning a Steel Barrier rather than concrete. It is both stronger & less obtrusive. Good solution, and made in the U.S.A.

For their part, Democrats said there was no progress as the shutdown entered its 16th day, and asked again that the government be reopened before negotiations on border security money begin.

A day before, they had asked the administration for a detailed plan of how such money would be used, and the Office of Management and Budget responded with a letter on Sunday evening reiterating the President’s request for $5.7 billion for the construction of “a steel barrier” along the southern border. Democrats have rebuffed that figure.

But the letter also provided a fuller picture of Trump’s border demands. In a small gesture to Democrats, it said the President wanted $800 million “to address urgent humanitarian needs”, including enhanced medical treatment. It also asked for funds to support 52,000 detention beds and 2,000 more law enforcement agents.

The shutdown, which is threatening to become the longest in US history, is affecting about 800,000 federal workers, many of whom will soon miss their first paycheck, and has curtailed the functions of numerous government agencies. The impasse has also added another crisis to Trump’s turbulent presidency as he adjusts to working in an era in which he must now share power with Democrats.

The party’s leaders gave little indication that they would come to terms with the president if he simply changed the materials used to construct the wall. Trump has been talking at least since mid-December about building a wall made up of “artistically designed steel slats” instead of concrete, but he seized on the idea on Sunday to a new degree.

“There’s no requirement that this government be shut down while we deliberate the future of any barrier, whether it’s a fence or a wall,” Sen. Dick Durbin, D-Ill., said on CBS’s Face the Nation.

But Mick Mulvaney, the acting White House chief of staff, said that while he thought the shutdown was “going to drag on a lot longer,” Trump’s shift in wall materials could provide a semantic opening to advance the talks.

“If he has to give up a concrete wall, replace it with a steel fence in order to do that so that Democrats can say, ‘See? He’s not building a wall anymore,’ that should help us move in the right direction,” Mulvaney said on NBC’s Meet the Press. “If that’s not evidence of the President’s desire to try and resolve this, I don’t know what is.”

While Trump had expressed little hope for the talks Sunday, he indicated that the coming days would offer a chance to show that resolve. “I think we’re going to have some very serious talks come Monday, Tuesday, Wednesday,” he said.

Democrats believe they have a plan to bring new leverage to the negotiations. Speaker Nancy Pelosi said the House would begin considering individual appropriations bills this week that would reopen the government, starting with legislation that would return workers to the Treasury Department, including the IRS, followed by measures to open the departments of Agriculture, Housing and Urban Development, and the Interior.

Those bills have little chance in the Senate, where Sen. Mitch McConnell, R-Ky., the majority leader, has held fast to his pledge that he would not put any legislation on the floor that the President would not approve.