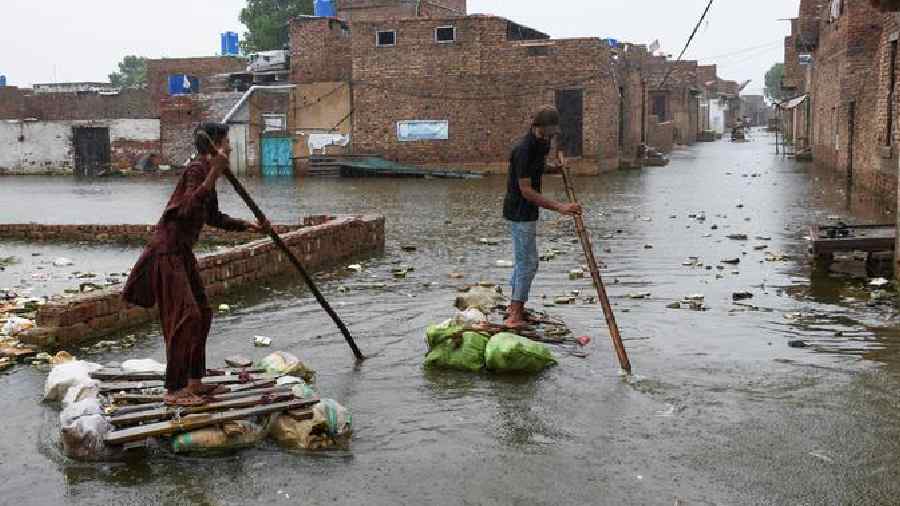 The death toll from the devastating floods in Pakistan has crossed the 1,000-mark after another 119 people died due to deluge-related incidents across the country in the last 24 hours, according to the official data on Sunday.

Floods triggered by the torrential rain since June 14 have wreaked havoc, inundating a vast swathe of flat land in the south and southwest of the country.

The National Disaster Management Authority (NDMA) said on Sunday that 119 people had died in the previous 24 hours as heavy rains continued to lash parts of the country.

"So far, 1,033 people have died and 1,527 persons injured across Pakistan," the NDMA, the main body tasked to deal with calamities, said.

The majority of deaths of 76 persons were reported in Sindh province in the last 24 hours, it said.

As many as 71 persons were injured across the country, it said.

At least 347 people died in Sindh, 238 in Balochistan, 226 in Khyber-Pakhtunkhwa, 168 in Punjab, 38 in Pakistan-occupied Kashmir, 15 in Gilgit-Baltistan, and one person was killed in Islamabad.

Prime Minister Shehbaz Sharif has said authorities have been assessing loss to the economy, which could run into billions of rupees.

Pakistan is ill-prepared to deal with such a huge crisis and has sought international help.

The United Nations is expected to issue a flash appeal of over USD 160 million on August 30 to support Pakistan.

Friendly countries have begun to step in to offer support, days after Pakistan briefed foreign diplomats about the national emergency.

The United Kingdom has announced that it will provide up to 1.5 million pounds for relief efforts.

"This is a time to stand together: GB is providing urgent support of 1.5 million pounds for #FloodRelief, British High Commissioner Christian Turner tweeted on Saturday.

This is a time to stand together:

Muslim countries also began reaching out to Pakistan for the provision of humanitarian aid with leaders of the UAE, Turkey, and Iran calling Sharif and pledging their support.

The UAE's relief aid includes some 3,000 tonnes of food supplies, as well as tonnes of medical and pharmaceutical supplies, in addition to tents and shelter materials.

Meanwhile, Prime Minister Sharif and Army Chief General Qamar Javed Bajwa separately visited the flood-hit areas of Balochistan and Sindh and pledged to make all-out efforts to compensate and rehabilitate all those affected or displaced by floodwaters.

"Visiting flood-affected areas and meeting people. The magnitude of the calamity is bigger than estimated. Times demand that we come together as one nation in support of our people facing this calamity. Let us rise above our differences and stand by our people who need us today," the PM tweeted after visiting the Sujawal area in Sindh.

Visiting flood affected areas & meeting people. The magnitude of the calamity is bigger than estimated. Times demand that we come together as one nation in support of our people facing this calamity. Let us rise above our differences & stand by our people who need us today.

Bajwa also met flood-hit people and the troops involved in the relief operation.

The safety and well-being of our countrymen come first and we won't rest until each one of the floods affected is not only reached but rehabilitated, no matter how much effort is required, the Army's media wing quoted Bajwa as saying during a visit to Balochistan's Lasbela district.

The forecast for the next 24 hours showed that dry weather was expected in most parts of the country, a major relief for the people as well as the government.