Deadlock persists over filing of FIR over attack on Imran Khan 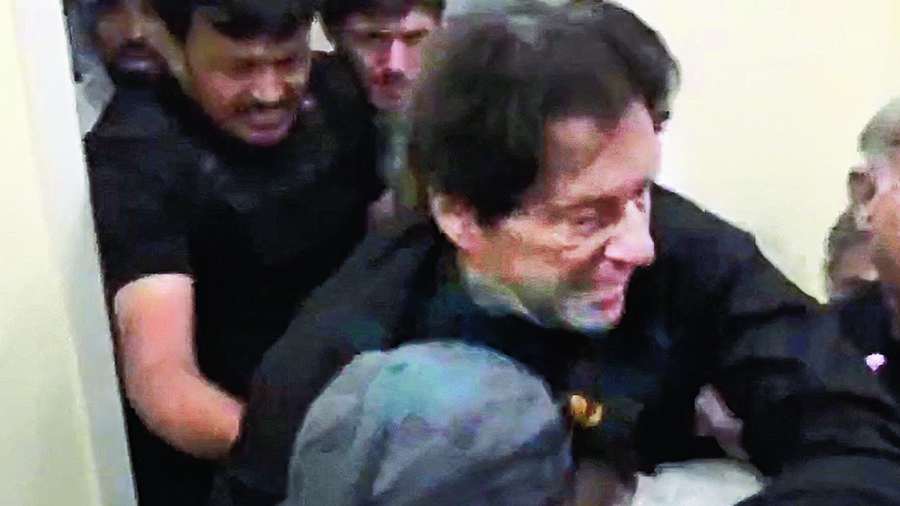 A deadlock persists over filing an FIR in connection with an assassination attempt on Imran Khan after the former prime minister refused to withdraw the name of a senior Pakistan Army officer from the complaint, which also carries the names of the Prime Minister and the Interior Minister.

Khan, 70, suffered a bullet injury in the right leg when two gunmen fired a volley of bullets at him and others mounting on a container-mounted truck in the Wazirabad area of Punjab province, where he was leading a protest march against the Shehbaz Sharif government.

Khan, the chairman of the Pakistan Tehreek-e-Insaf (PTI) party, alleged that Prime Minister Shehbaz Sharif, Interior Minister Rana Sanaullah and Major General Faisal Naseer were part of a sinister plot to assassinate him in the same way former Punjab governor Salman Taseer was killed in 2011 by a religious extremist.

He also said that an FIR was not being registered as some people were afraid of (some names).

Punjab Chief Minister Chaudhry Pervez Elahi is caught between the devil and the deep blue sea' as Khan, who essentially calls the shots for the ruling coalition in Punjab, continues to insist on naming the Army officer in the FIR, the Dawn newspaper reported.

The matter was also taken up by the Punjab Cabinet during its meeting on Friday, which was attended by police chief Faisal Shahkar as well as other senior government officials and the provincial law minister.

An official privy to the development told the newspaper that the meeting discussed the serious issues pertaining to all the legal aspects of the registration of a case.

He said the meeting also discussed that a further delay in the registration of a case could spoil all efforts to secure evidence and punish the suspects involved in the armed attack on Khan's container truck in Wazirabad.

Sharing the political dimensions of the issue, the source said Elahi was against the logic' of naming the senior army officer in the case.

Elahi and PTI leaders held many meetings on the issue where the former attempted to convince them to drop the name of the Army officer, the source added.

The matter of filing an application with the police was under discussion between the PTI (ruling coalition partner) and the Punjab government, he said.

He said the police chief conveyed to the government that the FIR had been the first authentic document about the commission of the cognisable offence to start investigations.

Unfortunately, the investigation process in this respect has come to a grinding halt, despite the detention of three suspects, including the alleged shooter who was caught from the spot, and two more suspects who provided the weapon.

At the Cabinet meeting, the police chief told other participants that the police had not received any application to register the FIR of an assassination attempt on former prime minister Khan.

Regarding the formation of a Joint Investigation Team (JIT), the Punjab police were of the opinion it would be premature to form a JIT before even lodging the case.

The meeting remained inconclusive when it was apprised that Elahi and the PTI's top leadership would discuss the matter in another round of meetings to be held late on Friday.

The PTI leaders, however, decided to hand over a copy of the application to the Chief Minister after taking a final decision in the meetings.

Responding to a question, the official said two other suspects Waqas and Sajid Butt who were arrested by the police on Friday believed to have sold the pistol and bullets to the prime suspect, Naveed Basheer, for Rs 20,000.

He said the key suspect was handed over to the Gujranwala Counter Terrorism Department (CTD) officers for further interrogation.

A senior police officer told Dawn that a set of blunders had been noticed by the law enforcement agencies while examining the footage of the crime scene recorded by a dozen CCTV cameras.

The biggest of the blunders was the security lapse that must be put on the priority in the starting phase of investigations into the incident, he said.