Advertisement
Home / World / Day One: Biden shows he means business, moves to undo Trump legacy
‘Much to repair. Much to restore. Much to heal’ 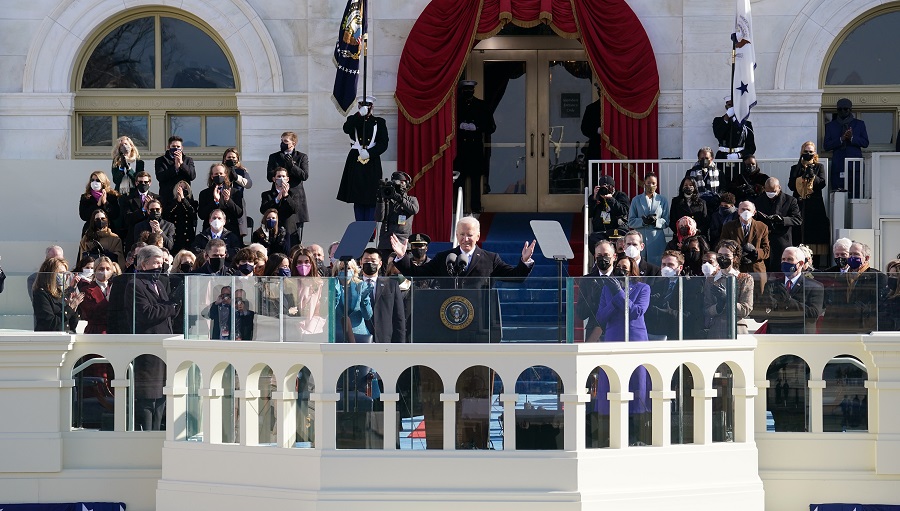 Moving with an urgency not seen from any other modern president, Biden signed 17 executive orders, memorandums and proclamations from the Oval Office on Wednesday afternoon. Among the steps the president took were orders to rejoin the Paris climate accord and end Trump’s travel ban on predominantly Muslim and African countries.

Individually, the actions are targeted at what the president views as specific, egregious abuses by Trump during four tumultuous years. Collectively, Biden’s assertive use of executive authority was intended to be a hefty and visible down payment on one of his primary goals: to, as his top advisers described it, “reverse the gravest damages” done to the country by Trump.

“We’ll press forward with speed and urgency, for we have much to do in this winter of peril and significant possibilities,” Biden said during his inaugural address at the Capitol, delivered to a crowd shrunken by coronavirus risks and threats of violence. “Much to repair. Much to restore. Much to heal. Much to build and much to gain.”

In his remarks, Biden stressed unity of purpose, urging Americans to “see each other not as adversaries but as neighbours” and pleaded with citizens and leaders to “join forces, stop the shouting and lower the temperature.”

But his first actions in office were aimed not at compromise and cooperation with his adversaries, but instead suggested a determination to quickly erase much of the Trump agenda. They fell within four broad categories that his aides described as the “converging crises” he inherited at noon Wednesday: the pandemic, economic struggles, immigration and diversity issues, and the environment and climate change.

Moments after Biden’s inaugural address, the leader of a conservative advocacy group underscored the divisiveness that remains in Washington, accusing the president of making moves on Day One that “will make America less safe, less free, and less prosperous.”

“As the Biden administration begins today, conservatives are prepared to fight back against the destructive policies of the far left,” said Jessica Anderson, the executive director of Heritage Action.

In some cases, Biden’s actions unilaterally and immediately reversed policies and procedures that Trump had put in place. In other instances, limits on his authority require the president to direct others in his administration to act or even to begin what could be a long process to shift the federal government in a new direction.

“A new day,” Jeff Zients, the coordinator of Biden’s coronavirus response, said Tuesday. “A new, different approach to managing the country’s response to the COVID-19 crisis.”

One of Biden’s first acts was to sign an executive order making Zients the government’s official COVID-19 response coordinator, reporting to the president. The order also restored the directorate for global health security and biodefense at the National Security Council, a group that Trump had disbanded.

Fauci to attend WHO board meet

Biden signed an executive order that Trump had steadfastly refused to issue during his tenure — imposing a national mandate requiring masks and physical distancing in all federal buildings, on all federal lands and by all federal employees. And he terminated Trump’s efforts to leave the World Health Organization, sending Dr Anthony Fauci, the nation’s top infectious disease specialist, to participate in the group’s annual executive board meeting Thursday.

Many of Biden’s actions on Wednesday were aimed at reversing Trump’s harshest immigration policies, moving swiftly to send a message to the world that the United States’ borders are no longer slammed shut.

He signed an executive order revoking the Trump administration’s plan to exclude noncitizens from the census count and a second-order aimed at bolstering the Deferred Action for Childhood Arrivals programme that protects “Dreamers” from deportation. Trump had sought for years to end the program, known as DACA.

Biden repealed two Trump-era proclamations that established a ban on travel to the United States from several predominantly Muslim and African countries, ending one of his predecessor’s earliest actions to limit immigration. The president also directed the State Department to develop ways to address the harm caused to those prevented from coming to the United States because of the ban.

And in a strike at Trump’s most cherished ambition, the construction of a border wall between the United States and Mexico — which was devised to keep immigrants out of the country — Biden halted construction as his administration examines the legality of the wall’s funding and contracts.

Biden also suspended a Trump-era programme that forced migrants to wait in Mexico while their immigration cases made their way through the courts. While the Migrant Protection Protocols, or “Remain in Mexico” program, was brought to a halt, Biden did not lift a pandemic emergency rule that has effectively sealed the border to asylum-seekers, according to a statement from the Department of Homeland Security.

“All current MPP participants should remain where they are, pending further official information from U.S. government officials,” the statement said.

On Wednesday evening, the Department of Homeland Security also announced a pause on deportations for certain noncitizens. The halt, which is to last 100 days, will take effect Friday. “The pause will allow DHS to ensure that its resources are dedicated to responding to the most pressing challenges that the United States faces,” the agency said in a statement, adding that an early challenge was the border during “the most serious global public health crisis in a century.”

In a nod to the diverse coalition that helped him get elected, the president signed a broad executive order aimed at requiring all federal agencies to make equity a central factor in their work. The order requires that they deliver a report within 200 days to address how to remove barriers to opportunities in policies and programs.

And Biden cancelled Trump’s 1776 Commission, which released a report Monday that historians said distorted the history of slavery in the United States.

On Wednesday, he signed a letter reversing Trump’s departure from the Paris Climate Accords.

He then signed an executive order beginning the process of overturning environmental policies under the Trump administration, including rescinding rollbacks to vehicle emissions standards; imposing a moratorium on oil and natural gas leases in the Arctic National Wildlife Refuge; revoking the permit for the Keystone XL pipeline; and re-establishing a working group on the social costs of greenhouse gases.

Back on right footing

Gina McCarthy, Biden’s national climate adviser, said the orders “begin to put the U.S. back on the right footing, a footing we need to restore American leadership, helping to position our nation to be the global leader in clean energy and jobs.”

As he promised during the campaign, Biden took several steps Wednesday to help Americans struggling through continued financial hardship brought on by the pandemic, in some cases reversing policies embraced by his predecessor.

He extended a federal moratorium on evictions and asked agencies, including the departments of Agriculture, Veterans Affairs and Housing and Urban Development, to prolong a moratorium on foreclosures on federally guaranteed mortgages. The extensions all run through the end of March.

Another order targets Americans with heavy educational debt, continuing a pause on federal student loan interest and principal payments through the end of September.