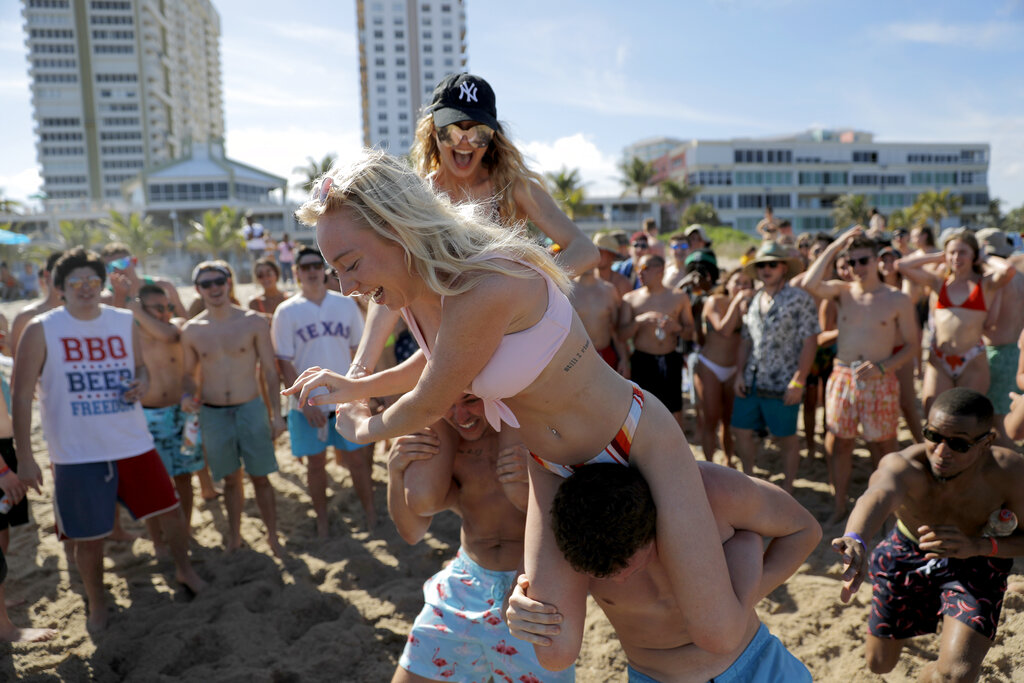 Young German adults hold “corona parties' and cough toward older people. A Spanish man leashes a goat to go for a walk to skirt confinement orders. From France to Florida to Australia, kitesurfers, college students and others crowd the beaches.

Their defiance of lockdown mandates and scientific advice to fight the coronavirus pandemic has prompted crackdowns by authorities on people trying to escape cabin fever brought on by virus restrictions. In some cases, the virus rebels resist — threatening police as officials express outrage over public gatherings that could spread the virus. 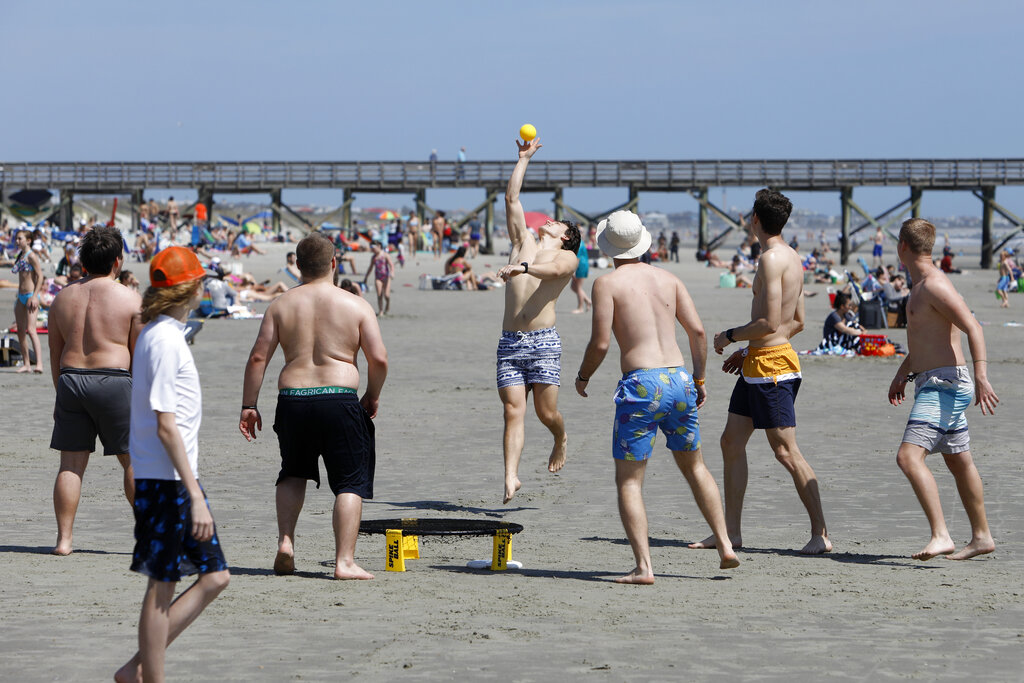 Despite warnings from government officials about taking caution and self distancing because of coronavirus, beach goers enjoy the Isle of Palms beach, Friday, March 20, 2020, in Isle of Palms, S.C. City authorities are restricting access to the popular beach from 7 a.m. to 7 p.m. daily starting Saturday to help stop the spread of the coronavirus.
AP

“Some consider they're little heroes when they break the rules,' said French Interior Minister Christophe Castaner. 'Well, no. You're an imbecile, and especially a threat to yourself.”

After days of noncompliance by people refusing to stay home and venture out only for essential tasks, France on Friday sent security forces into train stations to prevent people from traveling to their vacation homes, potentially carrying the virus to the countryside or beaches where medical facilities are less robust. The popular Paris walkway along the Seine River was closed and a nightly curfew was imposed in the French Mediterranean city of Nice by Mayor Christian Estrosi, who is infected with the virus.

Florida's governor closed all of the state's beaches after images of rowdy spring break college crowds appeared on TV for days amid the rising global death toll, which surpassed 13,000 on Sunday. Australia closed Sydney's famous Bondi Beach after police were outraged at pictures of the crowds. 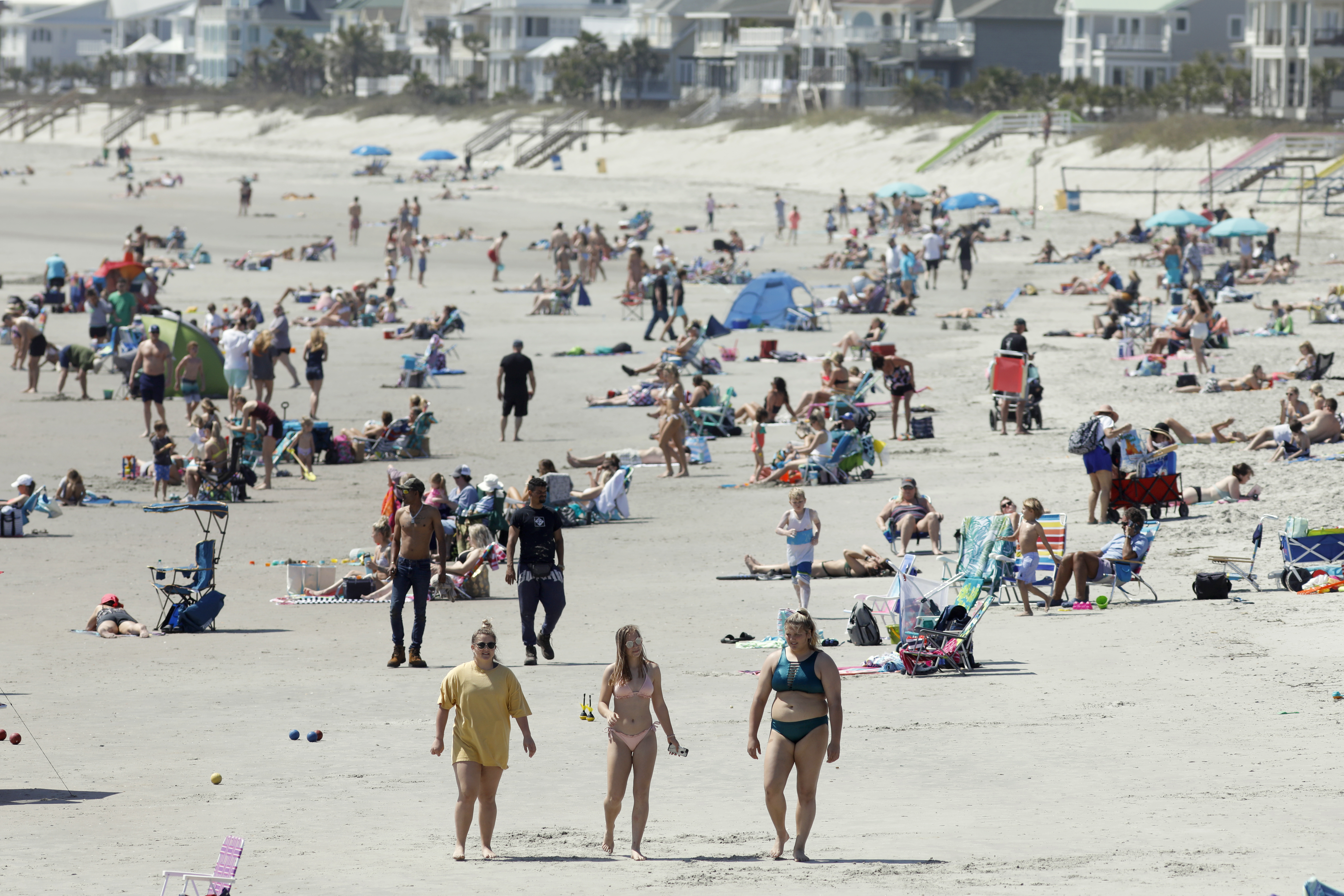 New York Gov. Andrew Cuomo said Saturday that people from 18-to-49 account for more than half of the state's coronavirus cases, warning them “you're not Superman, and you're not Superwoman.”

Many people were not complying with social distancing recommendations to stay away from each other in New York City's vast city park network ahead of a ban on congregating in groups that goes into effect Sunday night, Cuomo said.

As new coronavirus cases in China dropped to zero several days in a row, the chief medical officer for the International Clinic of Wuhan was alarmed at those elsewhere refusing to follow rules to contain the virus. Dr. Philippe Klein said people should look to China's confinement of tens of millions as an example to emulate “with courage, with patience, with solidarity.”

“I exhort you, the French, to apply the rules in our way,” said Klein, who is French.

Worldwide, over 307,000 people have been infected. For most, the coronavirus causes only mild or moderate symptoms. But it can cause more severe illness in others, especially older adults and people with existing health conditions. Some 92,000 people have recovered, mostly in China, where the virus first struck late last year.

The virus rebels tend to range from restless teens to wealthy adults who can travel to their getaway homes. Even in Italy, where the virus death toll soared beyond China's last week, authorities are still trying to rein in people from going outside for fresh air, sun and visits with friends to escape walled-in lives. 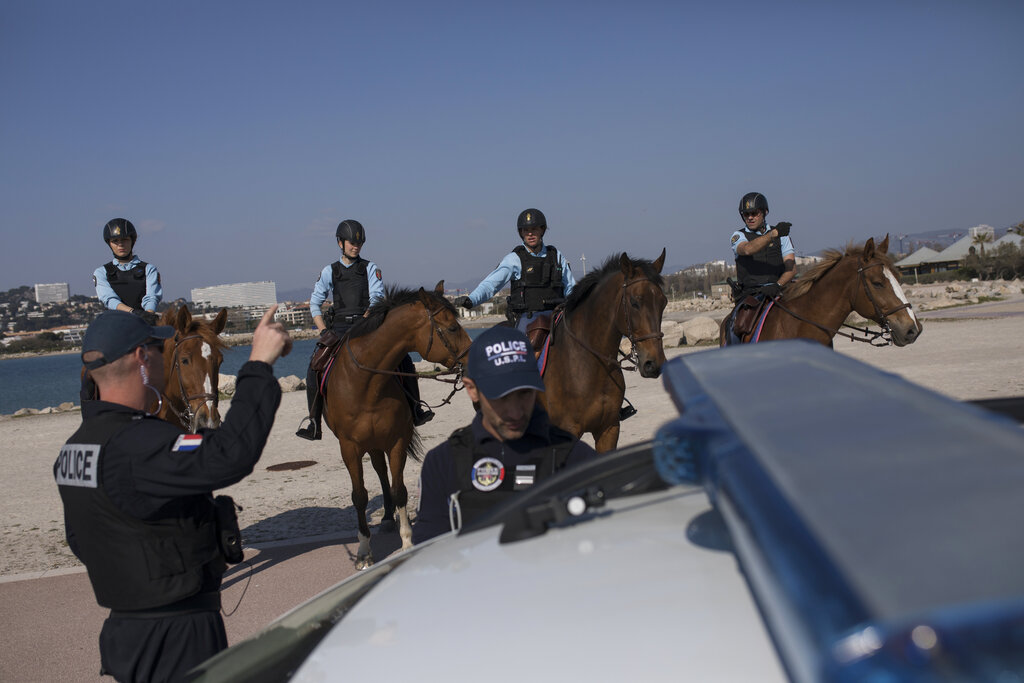 French farmers' markets where people congregate to shop for food have posed a special challenge for police trying to keep people apart from each other at the recommended 2 meters (6 feet), along with neglected urban housing projects where distrust and disobedience of authorities runs deep.

In Clichy-Sous-Bois, a Paris suburb where nationwide riots triggered by police harassment allegations erupted in 2005, a person bit a police officer trying to enforce confinement rules, said Linda Kebbab, a police union spokesperson. And a large crowd threatened to spit on officers who had planned to disperse them in the southeastern city of Lyon but left instead, she said.

In the southern German state of Bavaria, Gov. Markus Soeder lamented that 'there are still corona parties, there are young people who cough at older people and shout corona for fun and, above all, there are an incredible number of groups being formed.”

National police in Spain, which has the second-highest number of coronavirus infections in Europe after Italy, are using helicopters to spot groups of people meeting up outdoors. Then agents are sent in to break up the gatherings.

Spanish police have also taken to highlighting examples on social media of what people should not do in public during the country's state of emergency. In the southeastern Murcia region, they posted video of police stopping a person waddling outside in a full-body dinosaur costume and tweeted that pets can be taken for brief walks by owners but that 'having a Tyrannosaurus Rex complex is not” allowed.

And in Spain's northeastern region of Catalonia, police posted a picture of a man walking a goat on a leash, apparently trying to take advantage of the pet walking exception.

France now has 100,000 security personnel on the streets who are issuing fines amid a new national “Stay Home” mantra and warnings by officials that the country's two-week lockdown could be extended if the country's infection rate keeps rising. France on Sunday had nearly 15,000 infections.

In Greece, Prime Minister Kyriakos tried to convince people to say home, warning citizens that future virus prevention measures depend 'on our behavior.”

But after Florida's governor shut down the state's famed beaches, some businesses were still trying to draw in tourists, including Clearwater Mega Bite Shark Boat, a 40-foot (12-meter) vessel with a bow shaped like a shark’s snout that cruises the Gulf of Mexico off Florida's western coast.

The boat can carry 50 passengers but the owner was limiting trips to 10 to comply with federal advice. Only four people signed up for a Saturday trip, said an employee named Chase who answered the phone but declined to give his last name.

“Normally we'd be packed this weekend,” he said.